‘People love to pretend they are offended’: Simpsons creator Matt Groening defiantly brushes off the Apu controversy and says that the show ‘speaks for itself’

Apu Nahasapeemapetilon is the manager of Kwik-E-Mart convenience store on the animated series – and although he is Indian, he is voiced by a white actor, Hank Azaria.

Asked if Groening had any thought about the criticism of the character as an Indian stereotype, Groening told USA Today: ‘I’m proud of what we do on the show.

‘And I think it’s a time in our culture where people love to pretend they’re offended.’

The show addressed the Apu controversy in an episode that aired on April 8 – a response which also sparked a backlash. 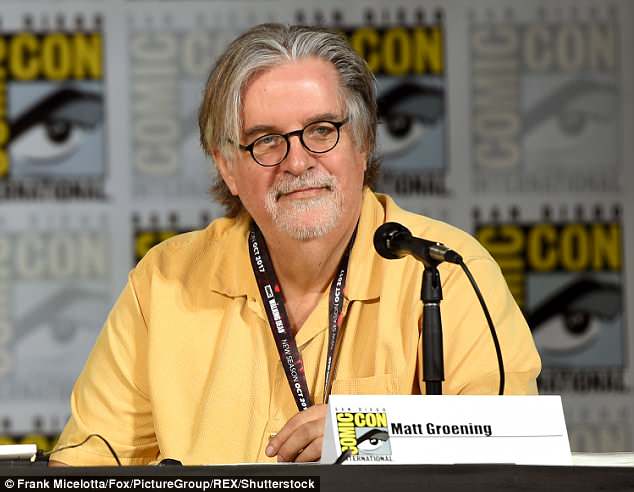 In the episode, Marge tried to remove any references that could offend anyone from a children’s book she had bought.

She reads the book to her daughter Lisa, who finds it boring.

‘Something that started decades ago and was applauded and inoffensive is now politically incorrect,’ says Lisa, turning towards a picture of Apu that had the words ‘don’t have a cow’ inscribed on it.

‘Some things will be dealt with at a later date,’ says Marge.

Asked what that exchange meant, Groening said: ‘We’ll let the show speak for itself.’ 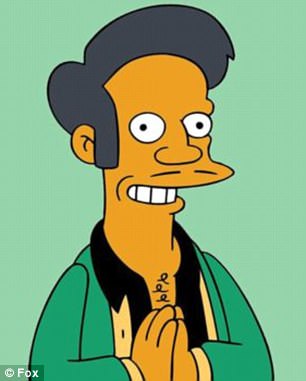 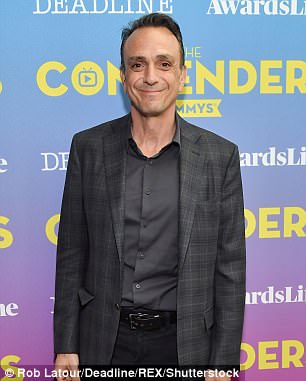 Apu Nahasapeemapetilon (left) is the manager of Kwik-E-Mart convenience store – and although he is Indian, he is voiced by a white actor, Hank Azaria (right)

He also noted that when the show began, it was ‘part of the downfall of civilization.’

‘I felt that the controversy at the beginning of the show was, again, people pretending to be offended by Bart’s very mild sassiness. I knew it would blew over.’

Last week, Azaria said in an interview on ‘The Late Show’ that he was ‘perfectly willing and happy to step aside, or help transition’ the character to something new.

‘The idea that anybody, young or old, past or present was bullied or teased based on the character of Apu, it just really makes me sad,’ he told Stephen Colbert.

‘It was certainly not my intention. I wanted to spread laughter and joy with this character and the idea that it’s brought pain and suffering in an way, that it was used to marginalize people, it’ upsetting.’

Azaria also said he had nothing to do with the show’s response to the criticism and that he didn’t agree with it. 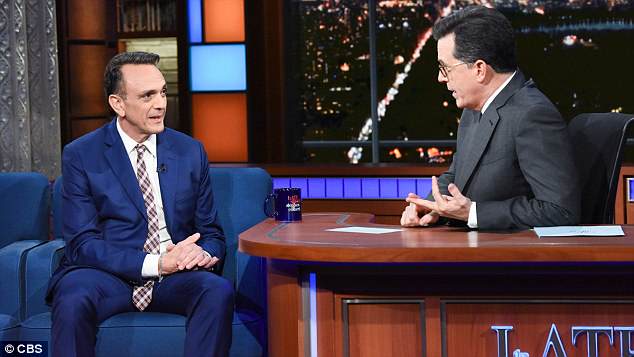 Hank Azaria said in an interview on ‘The Late Show’ that he was ‘perfectly willing and happy to step aside, or help transition’ the character to something new

He added that the most important thing was to listen to South Asian and Indian people and called for more inclusion in The Simpsons writing room.

‘I really want to see Indian, South Asian writers in the room, not in a token way but genuinely informing whatever new direction this character may take, including how it is voiced or not voice,’ Azaria added.

‘I’m perfectly willing and happy to step aside or help transition it into something new.

‘I really hope that’s what The Simpsons does and it not only makes sense, but it just feels like the right thing to do to me.’

The controversy surrounding Apu erupted in recent months following the release of a documentary last November called The Problem with Apu.

In the documentary, Hari Kondabolu, an actor and comedian of Indian origin, denounced the character’s marked accent and other stereotypes of south Asians. 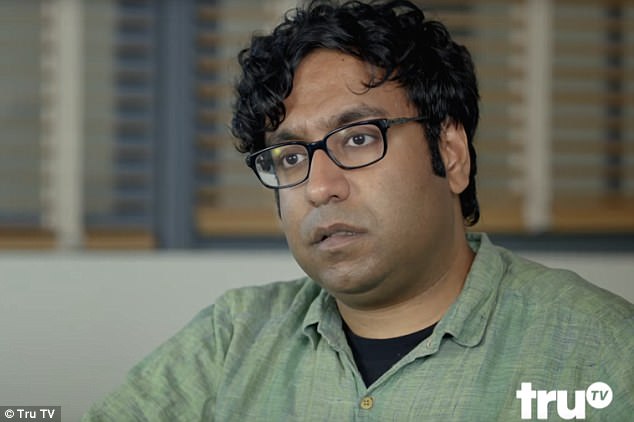 In the documentary, Hari Kondabolu (pictured), an actor and comedian of Indian origin, denounced the character’s marked accent and other stereotypes of south Asians

‘A white guy doing an impression of a white guy making fun of my father. If I saw Hank Azaria doing that voice at a party, I would kick the s*** out of him.’

Both Azaria – who voices numerous characters on the show including Chief Wiggum, Moe and Comic Book Guy – and Groening refused to appear in the documentary to answer questions.

Azaria, however, later told a TMZ reporter that Kondabolu ‘made some really interesting points’ and ‘gave us a lot at The Simpsons to think about.’

It comes as The Simpsons broke the record for the most episodes in a primetime scripted series on American TV.

Fox’s 636th episode about the cartoon family, which aired Sunday night, pushed it past drama ‘Gunsmoke’ which stopped at 635 episodes in 1975 after 20 years on the air. 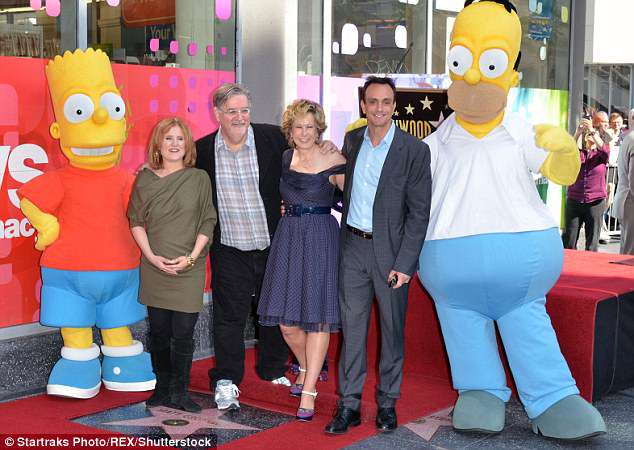 On Sunday night, The Simpsons broke the record for the most episodes in a primetime scripted series on American TV. Pictured, creator Matt Groening (second left) with (from left) Nancy Cartwright, Yeardley Smith and Hank Azaria

Outside of primetime, some US soap operas have been running since the 1960s.

Since it first aired in 1989, The Simpsons has won more than 30 Emmys.

In its early years, the animated comedy regularly pulled in more than 15 million viewers and had double that – 33 million – for its most-watched episode in 1990.

It became so popular that references to The Simpsons have formed part of pop culture.

Declining audience figures had led to fears that it would not be renewed, but in 2016, Fox committed to continue the show until a 30th season in 2019.