That sinking feeling! Nail-biting moment as expensive new passenger liner almost capsizes as it is being lowered into the water – but crane driver manages to right it just in time

This is the nerve wracking moment a brand new passenger liner was almost forced out of commission before it even began its career.

The brand new expensive ship almost capsized after a crane malfunctioned while lowering it into the water.

The incident happened in a port in the resort town of Anapa in the south-western Russian Krasnodar krai region where the huge crane was lowering the passenger liner into the water.

The malfunction meant that one side of the crane lowering the huge vessel into the water went too fast, causing the ship to tip over onto one side.

Remarkably the footage was captured by an eyewitness which shows how close the ship named the Gorgypia came to being put into the water upside down. 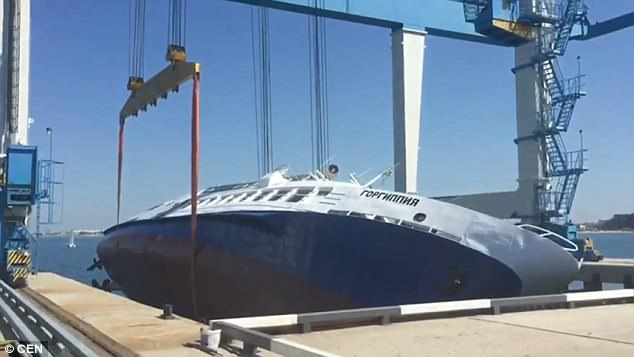 Going, going but not gone after the person operating the controls saves the boat

Disaster seemed imminent but at the last moment the crane operator regained control and the ship righted itself  – swinging almost 180 degrees, and smashing an aerial mast in the process.

Officials at the port of Anapa confirmed there was an incident during the launch of the Gorgypia which they blamed on a crane malfunction. 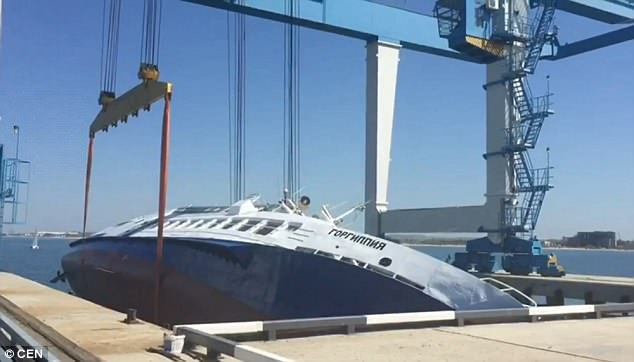 In a statement to local media spokesman said: “Because of a malfunction of the equipment the Gorgypia was not properly lowered into the water.”

They said they were looking into what caused the motor on one side of the crane to malfunction.

Thankfully no one was on board at the time.