Hopes for Sir Alex Ferguson’s recovery were lifted last night after friends revealed he was awake and talking.

The 76-year-old has been in intensive care after suffering a brain haemorrhage at the weekend.

While there was no official update on his condition yesterday, friends said he had been ‘sitting up talking and asking about his results’ two days after emergency brain surgery. 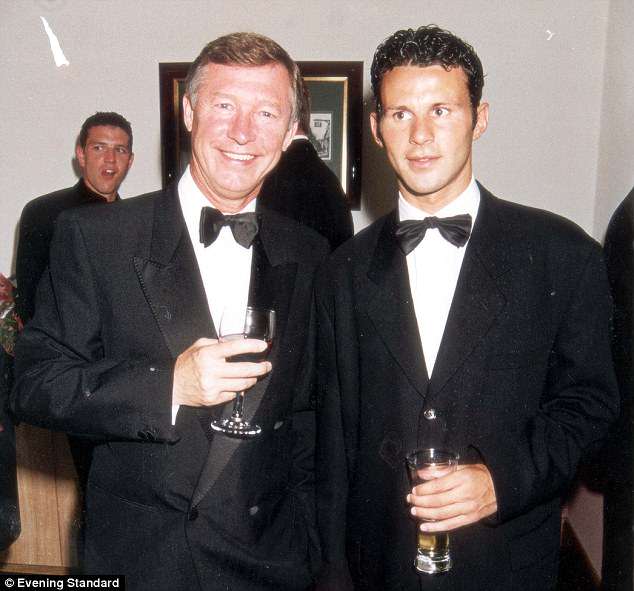 Leading men: Sir Alex and Ryan Giggs at a film premier in 1995 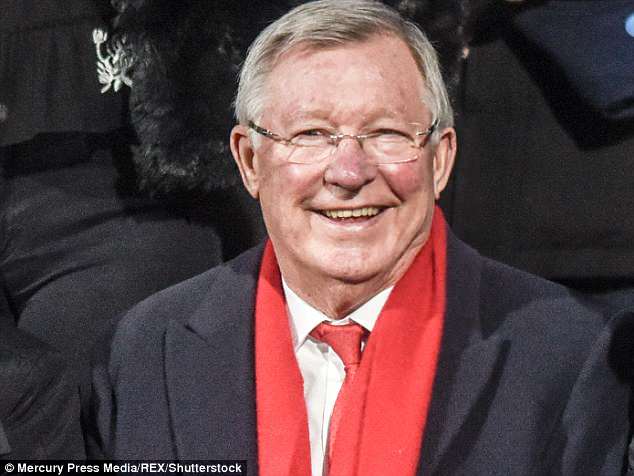 The footballing legend is sitting up talking and quizzing doctors about his test results just two days after suffering a brain hemorrhage, according to friends 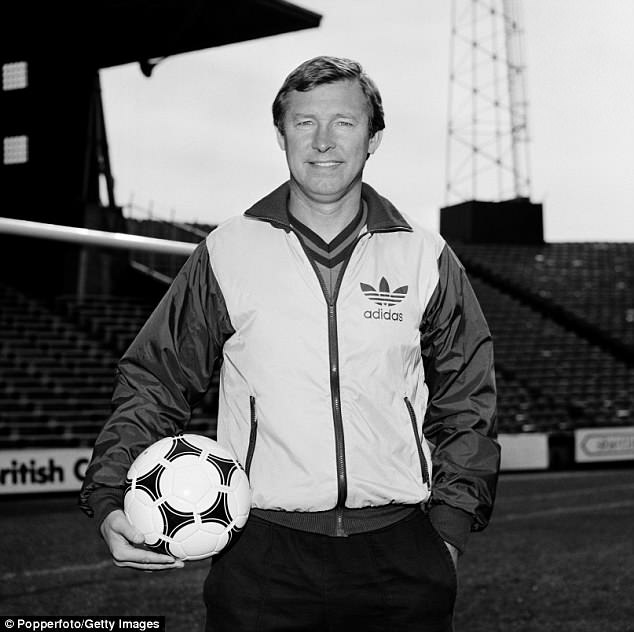 The positive news came after the player who shared in more of Sir Alex’s successes than any other said the next couple of days would be ‘crucial’.

Ryan Giggs spoke of his shock but said his former Manchester United boss was ‘a fighter’ and was hopeful the Scot would quickly bounce back.

Giggs added his support for his ex-manager as football overcame its traditional rivalries to pray for his recovery. The Welshman, 44, said: ‘It was a huge shock as the news filtered in. But I gather that the operation has been a success. I think the next couple of days are crucial.

‘I’m hoping he pulls through for a full recovery and my best wishes go out to all his family.’ Giggs, who made his Manchester United debut under Sir Alex aged 17, played for the manager 941 times and was a key figure in all 13 of his Premier League titles. 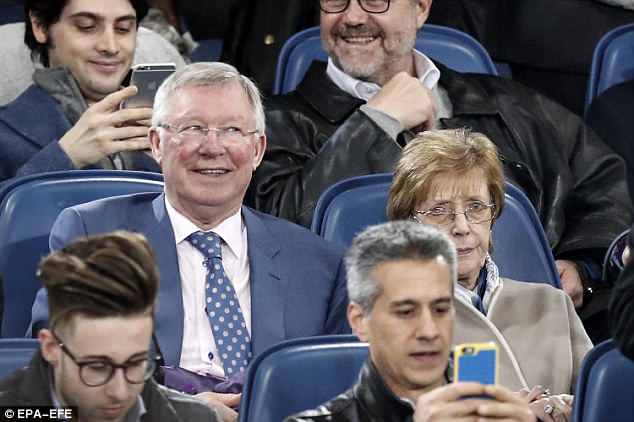 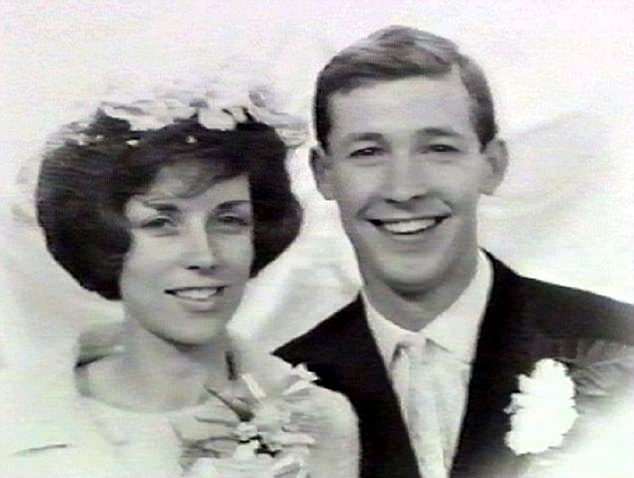 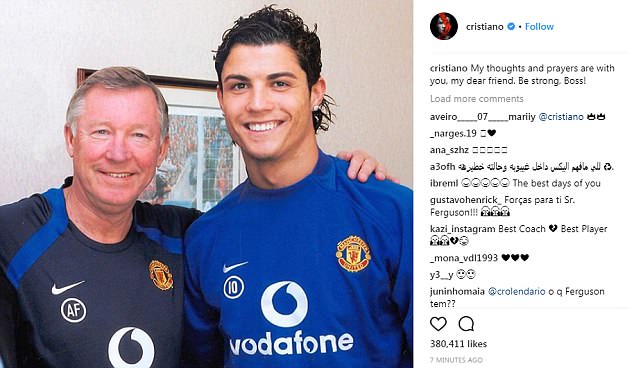 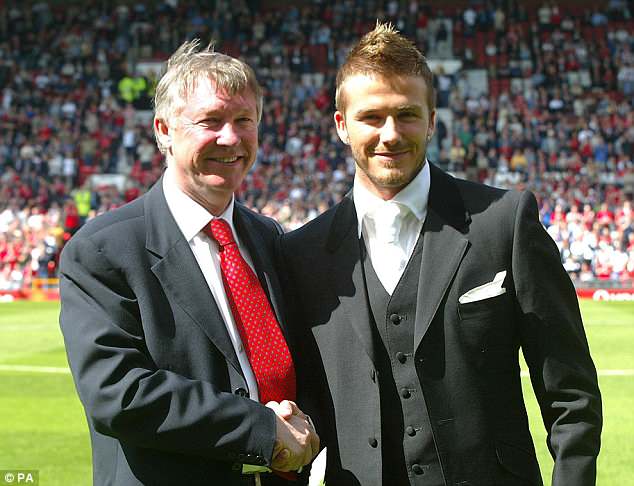 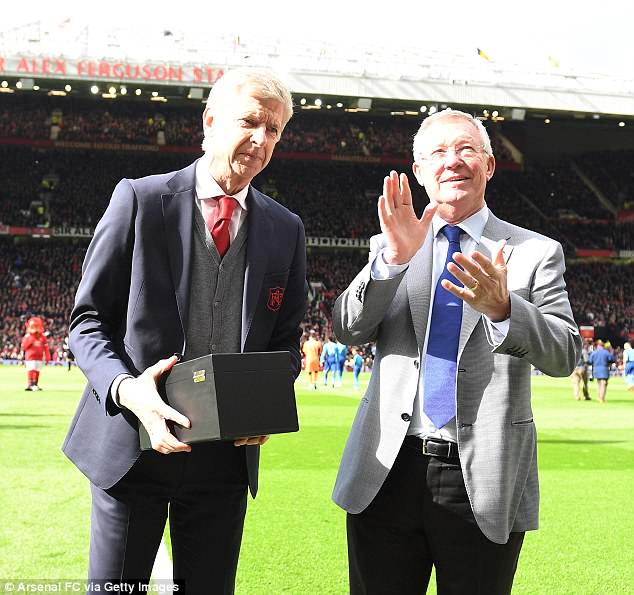 He was seen at Manchester United’s stadium, Old Trafford, just last weekend to present Arsene Wenger with a gift before his Arsenal departure

He said: ‘Now is the time to pray and hope he can make a full recovery. He has been the biggest influence in my career, both on and off the pitch.

‘I know the operation has been a success – but he is a fighter and that is what makes me think that he will be able to make a recovery.’

Sir Alex suffered brain bleed that kills one in five

Sir Alex Ferguson is believed to have suffered a subarachnoid haemorrhage, which can be confused for a stroke and causes similar speech loss and paralysis.

Often caused by smoking and uncontrolled high blood pressure, it kills about one in five people immediately.

Another third are left so disabled that they need permanent 24-hour care.

However, between a third and a half of people make a full recovery, returning to a normal quality of life in just a few months.

Ranjeev Bhangoo, a consultant neurosurgeon at King’s College Hospital in London, said: ‘The prognosis all depends on what Sir Alex was like before the bleed happened.’

He added: ‘If he had only a headache and a reasonably good level of consciousness, with no weakness in his arms or legs, the prognosis is reasonably good.

‘If he had greatly diminished consciousness and severe weakness, then the chances of making a good recovery are a lot less.’

The haemorrhage is a bleed between the skull and surface of the brain, which usually starts with a sudden ‘thunderclap’ headache so painful that many people lose consciousness.

Sir Alex remained in intensive care at Salford Royal Hospital last night. The manager is understood to have suffered a fall on Saturday morning at his home in Wilmslow, Cheshire. He was taken to Macclesfield District Hospital and later transferred – with a police escort – to Salford Royal.

Former United stars Wayne Rooney, David Beckham and Cristiano Ronaldo have also sent their best wishes to the man who led the club to 38 trophies between 1986 and 2013.

Current Manchester United and England defender Phil Jones said Sir Alex had taken him ‘under his wing like a father’. The 26-year-old said: ‘I know his character and I know he has that fight in him. He is such a legend in my eyes.

‘He is the one who brought me to the club and gave me that opportunity to play for one of the biggest clubs in the world. He has got all his family and friends around him, the support from all the players and staff at Manchester United and football around the world.

‘When something like that does happen it’s nice that the football world comes together and shows support and we are all rooting for him.’ Manchester United said in a statement that the surgery had gone ‘very well’ but Sir Alex needs ‘a period of intensive care to optimise his recovery.’

His children, including football manager son Darren, and wife Cathy are understood to have been at his bedside.

The haemorrhage, a bleed between the skull and surface of the brain, can cause speech loss and paralysis. Up to a third of patients make a full recovery. 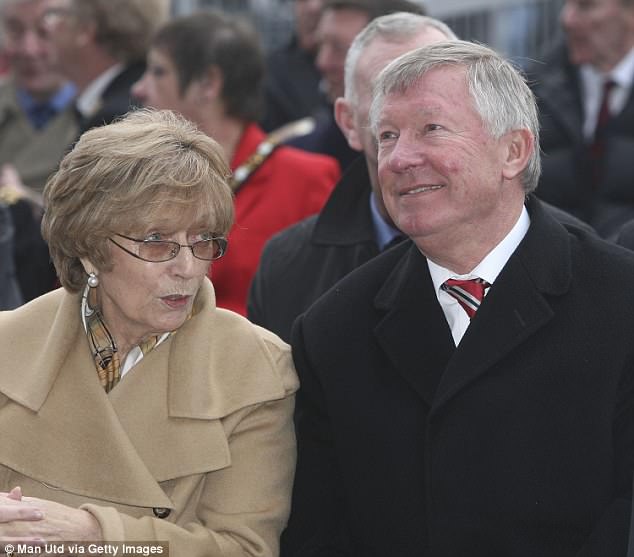 Those who know the man best have always pointed to the real secret of his success: Lady Ferguson. Pictured, Sir Alex and Lady Cathy Ferguson

WHAT IS A SUBARACHNOID HAEMORRHAGE?

A subarachnoid haemorrhage is an uncommon type of stroke caused by bleeding on the surface of the brain. It’s a very serious condition and can be fatal.

Subarachnoid haemorrhages account for around 1 in every 20 strokes in the UK.

There are usually no warning signs, but a subarachnoid haemorrhage sometimes happens during physical effort or straining, such as coughing, going to the toilet or lifting something heavy.

Treatment: A person with a suspected subarachnoid haemorrhage needs a CT scan in hospital to check for signs of bleeding around the brain.

If a diagnosis of subarachnoid haemorrhage is confirmed or strongly suspected, you’re likely to be transferred to a specialist neurosciences unit.

Medication will usually be given to help prevent short-term complications, and a procedure to repair the source of the bleeding may be carried out.