President Sisi announced his plan to run for a second term in the presidential election that will take place in March. 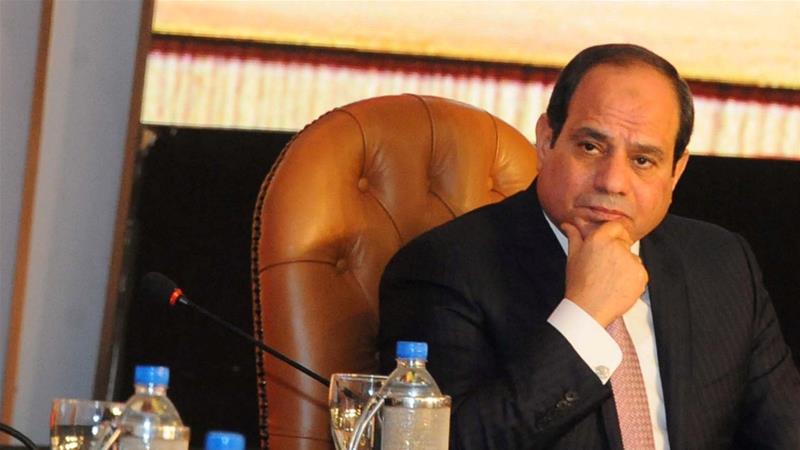 Egypt’s President Abdel Fattah el-Sisi has announced he will run for a second, four-year term in the country’s presidential elections that will take place in March.

Sisi made the expected announcement during a televised conference in Cairo on Friday where he stressed the importance of citizens voting to “preserve the democratic experience that began four years ago”.

“Your participation in the election will be a strong message,” he said, before jokingly adding that Egyptians would “become exhausted with me again because Egypt needs every sacrifice”.

Following the president’s announcement, former Egyptian armed forces chief of staff General Sami Anan said on Saturday that he will contest Sisi in the election.

“I call on civilian and military institutions to maintain neutrality towards everyone who had announced their intention to run and not take unconstitutional sides of a president who will leave his post in a few months,” Anan said in a video statement on Facebook.

Egypt must be saved from incorrect policies, Anan said.

The presidential vote will be held on March 26-28, with a runoff scheduled for April 24-26, if needed. Candidates must register between January 20-29.

“It was just 11 days ago when the election commission announced that the elections will be held in March – that’s just eight weeks away,” Dalia Fahmy, associate professor of political science at Long Island University, told Al Jazeera from New Jersey in the US, adding that “Sisi has been systemically consolidating power around him.”

Fahmy noted that the announcement of the January 29 deadline left hopefuls with “just a couple of weeks to announce candidacy, submit paperwork, assemble a campaign team, campaign for president and actually get election monitors in place”.

So far, two other candidates have stated their intentions to run: Khaled Ali, a human rights lawyer and opposition leader, and Essam Heggy, an Egyptian space scientist who served as the country’s adviser for scientific affairs from 2013 to 2014.

Earlier this month, Ahmed Shafik, former prime minister, backtracked on his stated intention to be a presidential candidate.

The 76-year-old had previously announced his plan to run in an exclusive video message to Al Jazeera.

The New York Times quoted one of Shafik’s lawyers, who asked not to be named, as saying that the Egyptian government had forced him to withdraw by threatening to investigate previous charges of corruption against him.

As Egypt’s army chief, Sisi became president in 2013 after removing Mohamed Morsi, of the Muslim Brotherhood, in a coup. He went on to win by a landslide in the 2014 presidential elections.

Under Sisi, human rights in Egypt have deteriorated, with organisations reporting that at least 60,000 people have been imprisoned since the general came to power.

There have also been reports of forced disappearances and a clampdown on press freedom.

Fahmy said the upcoming vote was just an election to rubber stamp the existing reality of Sisi’s rule.

“Will the elections be free and fair? No, because there is no contestation – we’ve seen viable candidates withdraw or pull out, and we have two right now who are very weak in nature and really haven’t done the legwork,” she said.

“So what we’re looking at, exactly almost seven years after the initial Arab Spring in 2011, is that we are returning to a time where elections are nothing more than window trappings of the vestiges of democracy but not really institutions that lead to the voice of the people to be heard.”