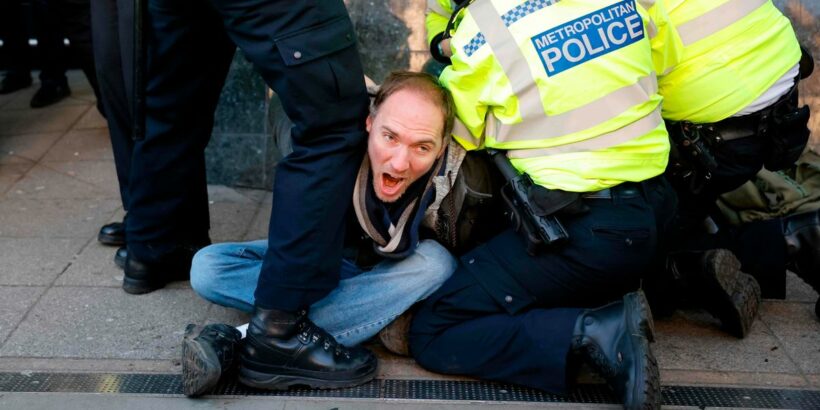 Sixteen Covidiots have been arrested for breaching coronavirus restrictions during an anti-lockdown protest in south-west London, the Metropolitan Police has confirmed.

A crowd of about 30 people marched down Clapham High Street on Saturday afternoon chanting “take your freedom back” while being heckled by members of the public.

The protest took place after London mayor Sadiq Khan declared a “major incident” as the spread of coronavirus threatens to “overwhelm” the capital’s hospitals.

The Met said 16 people were arrested for suspected breaches of coronavirus regulations and taken into custody.

Dozens of officers were deployed to Clapham Common to try and contain the protest, which was organised by the group StandupX and began shortly after midday.

One woman shouted from her car: “There’s a pandemic going on, you t***s” as the maskless protesters headed east towards Stockwell, while another bystander called them idiots.

The small group of demonstrators eventually returned to Clapham Common park before being dispersed by police.

NHS England figures showed the number of Covid patients in London hospitals stands at 7,277, up 32% on the previous week.

Around eight in 10 recent positive cases of Covid-19 in London and eastern England could be the new variant discovered in the UK, according to the ONS.

On the protest, the Met tweeted: “Gathering for the purpose of a protest is not an exemption to the rules & and people looking to attend may face enforcement action.”

At least seven fixed penalty notices were issued by officers during the event, the force added.

Dorset Police chief constable James Vaughan said: “I condemn the actions of these selfish individuals who knowingly flouted the lockdown restrictions to carry out this protest activity.

“Their reckless actions come at a time when our county is facing its highest number of cases since the beginning of this pandemic.”

Do you think the UK's current lockdown is too much or not enough? Let us know in the comments below