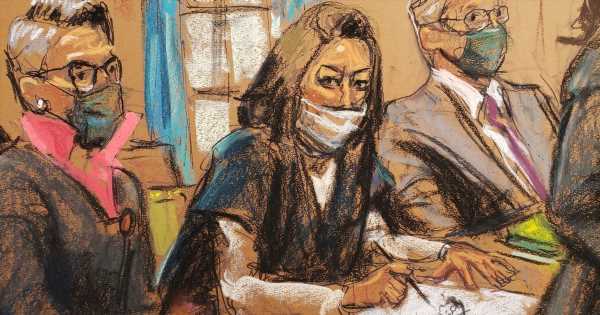 A courtroom sketch artist sitting in on the Ghislaine Maxwell sex trafficking trial felt 'creeped out' when the socialite began to draw her.

Illustrator Elizabeth Williams, who has been sketching in court for 40 years, was at a pre-trial hearing in November when Maxwell twice began staring at her while drawing, according to The Sun.

A picture of the tense encounter, created by fellow sketch artist Jane Rosenberg, shows Maxwell swivelled round in her chair to draw them a second time, at jury selection later in the month.

In the description of Rosenberg's sketch, Reuters wrote: "Ghislaine Maxwell, the Jeffrey Epstein associate accused of sex trafficking, makes a sketch of court artists while seated between defence attorneys Bobbi Sternheim and Jeffrey Pagliuca, during a pre-trial hearing ahead of jury selection."

Speaking to The Sun, Williams said: “It was the first thing she did when she got into court.

“It was like she didn’t think anyone would notice. She stared right at us, and it was definitely an odd moment.

“Maybe she was trying to psyche us out, or perhaps she was just missing human contact. But whatever the reason, it didn’t creep us out. She’s not exactly an intimidating person!

“The second time she did it, she turned right around to us. It was very deliberate.”

Maxwell's trial began on November 29, as she stands accused of recruiting girls and participating in sexual abuse by financier and convicted sex offender Jeffrey Epstein, who died while in custody in 2019.

Prosecutors have charged the 59-year-old with conspiracy and enticing minors to travel to engage in illegal sex acts, and the transportation of minors to engage in criminal sexual activity for allegedly grooming and recruiting underage girls from 1994 through 1997.

Maxwell denies the charges and her defence team insists she is being made a "scapegoat" for Epstein's crimes.

The trial is expected to resume on Monday and last into January.

To stay up to date with all the latest breaking news, make sure you sign up for one of our newsletters here.