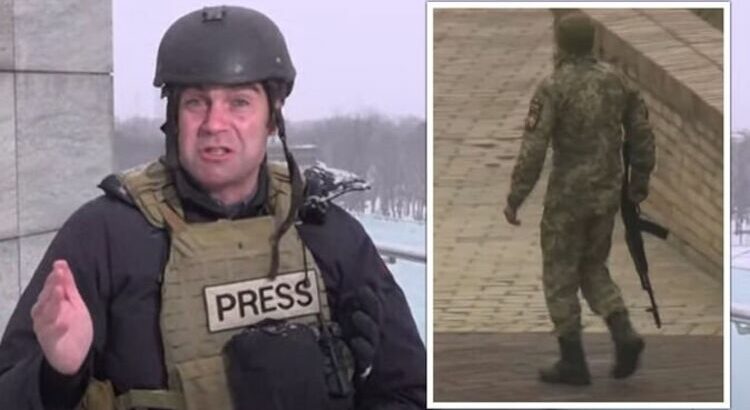 Mr Sparks reported from Kharkiv but was interrupted as missiles could be heard exploding loudly in the background.

He paused to allow the microphones to pick up as he became worried about his safety.

He told Sky News: “[Kharkiv] was like any other city now it’s completely deserted.

“Couple of cars trying to negotiate the snow, if a reminder were necessary that this city is in the process of being encircled by Russian troops…

“This serves as an excellent reminder of that, it is still going on, it is like this drumbeat of war.”

He said: “We are going to let John Sparks go, here in Kiev the sirens are going off, we have seen troops running across the square here.

“A lot of people moving quite quickly, certainly a lot of troops, they saw them with boxes of ammunition…

“I think it might be a sensible option for us [to take cover] at some stage in the not too distant future.

“In fact, I don’t know… we’re going to go back to Neil Patterson in London and we will come back to you once we get the all-clear.”

Around 10 minutes later, Mr Austin said he was given the all-clear as soldiers rushed to shelter following the siren.

He said many were carrying boxes of ammunition and crossing the open street as reports of gunfire was heard.