Two boating disasters off the coast of a small Scottish island during World War One saw hundreds of American military personnel buried by compassionate locals.

In an act being commemorated on the island of Islay this week, nearly 700 people were buried with dignity, in two horrific events just eight months apart, BBC reported.

In February 1918, American ship the SS Tuscania was torpedoed in 1918 by the German U-boat UB-77 just off Islay’s coastline.

The island, with a population of just 6,000 at the time, were already reeling from the loss of 150 of their own when they pulled together to retrieve the bodies of American soldiers. 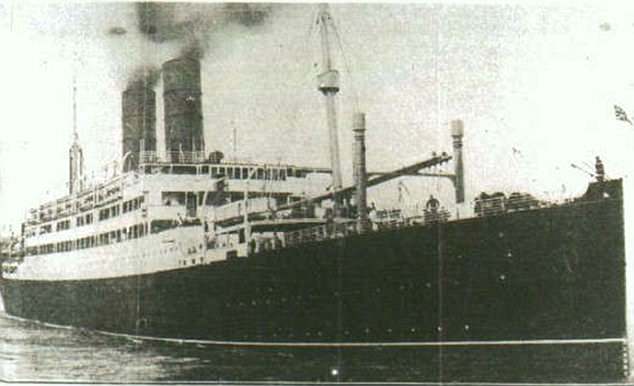 The SS Tuscania (pictured) was torpedoed by a German ship in February 1918, killing nearly 200 soldiers off the coast of Islay, a Scottish island 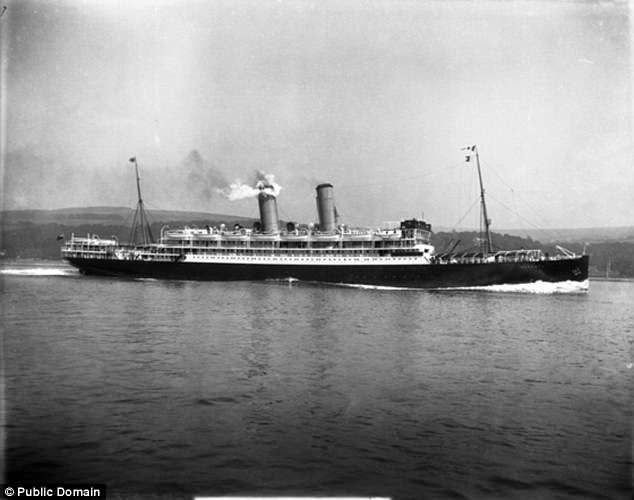 The SS Otranto (pictured) landed in troubled waters after colliding with a friendly British ship. Despite the efforts of a British destroyer ship, more than 400 were left on board when the ship went down – only 16 survived 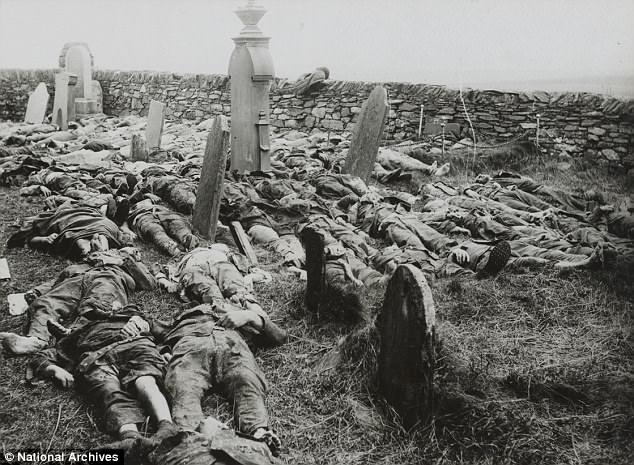 Pictured: Bodies laid out for burial after nearly 400 were killed on board the SS Otranto. When the bodies were found washed up on shore they were reportedly piled 15 feet off the ground

The ship – formerly a cruise liner – was carrying about 2,500 – and many survived thanks to the Royal Navy, but those who had sought refuge in lifeboats found themselves shipwrecked once again on the rocky cliff face of the island’s Oa peninsula.

Sergeant Malcolm MacNeill and his three fellow officers – the entirety of the town’s police force, recovered, identified and buried nearly 200 soldiers with the help of the islanders.

Residents, feeling the men’s burials deserved an American flag, laboured for hours and well into the night to handcraft one from the available materials.

It was made by Jessie McLellan, Mary Cunningham, Catherine McGregor, Mary Armour, and John McDougall – who worked through the night at Islay House to complete it.

They finished the stitching around 2am just ahead of the first US funeral held on Islay. 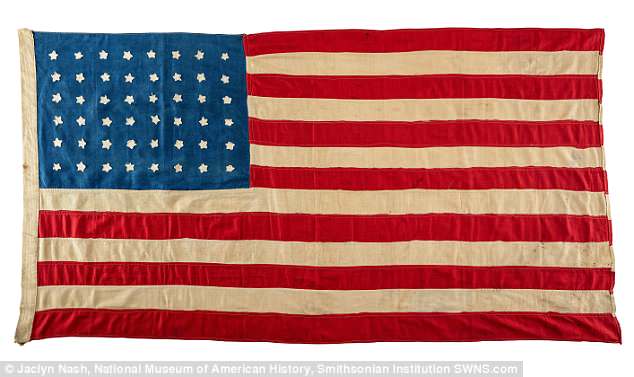 Locals retrieved and held funerals for the dead, and a group of women hand stitched a US flag in less than a day so the soldiers could be buried with honour 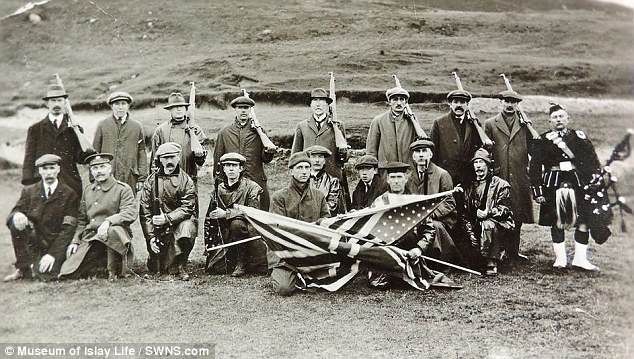 Pictured: A scene from the traditional funeral held for the hundreds of American dead in February 1918 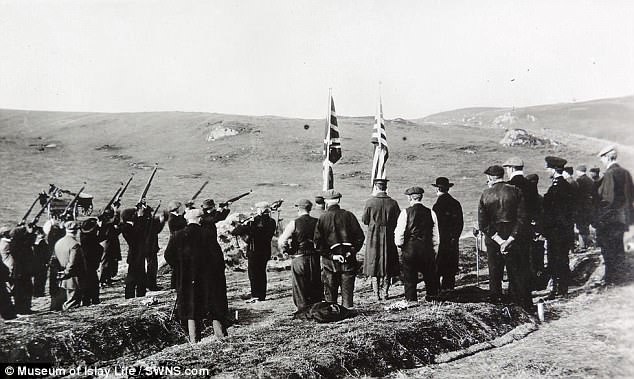 Fearing a repeat of February’s fatal disaster, the British ship and the rest of the convoy continued on.

British destroyer HMS Mounsey, commanded by Lieutenant FW Craven, was the first to respond to the SS Otranto’s mayday calls, and hundreds of those on board, most of whom were American, were able to leap overboard to safety, Islay Blog reported.

But about 400 men remained on the warship, only 16 of who were able to swim to shore.

The next day, Islay residents were greeted with the sight of dead bodies piled up on the shore, and Sergeant MacNeill once again set to work on honouring the dead. 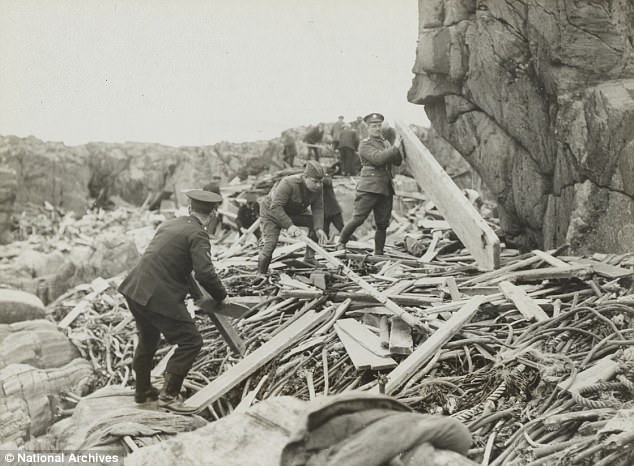 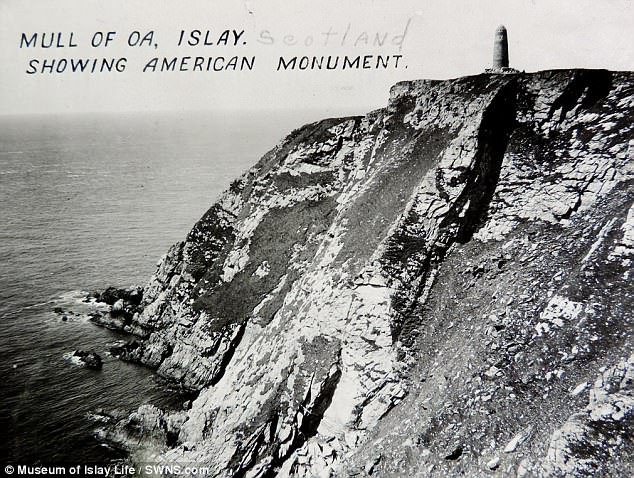 A book written on the devastating shipwreck and published in 2012, Many Were Held by the Sea: The Tragic Sinking of HMS Otranto, claims bodies were piled up to 15 feet high.

Sergeant MacNeill recorded details of every single body found on Islay’s shores, and those found on the nearby island of Muck, before the men were buried.

The notebook containing the Sergeant’s notes was preserved and is now showcased at the The Museum of Islay Life.

After the war, each body was exhumed from the Island and returned to the US – apart from one soldier, Private Roy Muncaster, who remains at the request of his family.