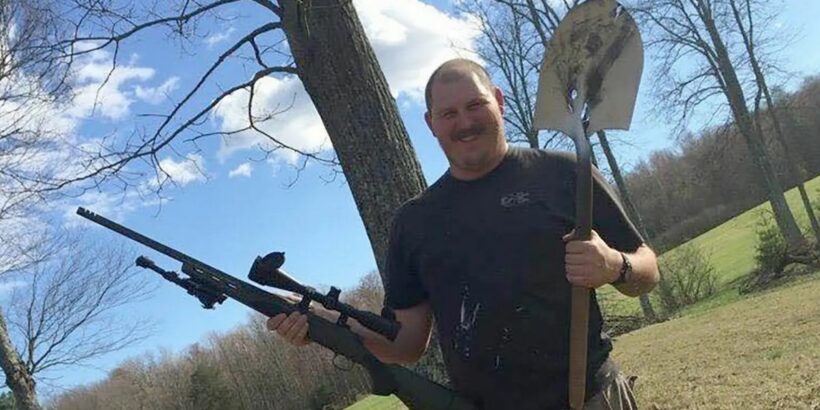 The thug responsible for killing two police officer and injuring a third has been pictured proudly displaying his guns in haunting pictures uncovered after the shooting.

Nicholas Brutcher, 35 was seen brandishing a handgun at a wedding in a Facebook post from 2016, while also posed with a hunting rifle and shovel in another.

Brutcher, who was apparently a beer-drinking, divorced dad described as "rowdy" by his neighbours is said to have lured the officers with a phoney call to emergency services.

One neighbour describing the alleged cop-killer, from Connecticut, United States, said: "Nick was the big, rowdy one. He was the big, funny one, a big teddy bear. He was huge. Big guy, but sweet as pie."

That same neighbour added that the family must feel "traumatised" by the horrifying actions of Brutcher, who was killed at the scene by police, while his younger brother Nathaniel was injured.

His younger brother remains in hospital according to police, who reported two officers had been killed and another injured by Brutcher.

Cops responding the the fake domestic dispute call at the killer's home are said to have been opened fire upon arriving at the property.

Two officers were shot dead at the scene, while a third was shot and injured in the attack.

Brutcher is said to have dialled police to his address, where he was waiting with an AR-15 style gun.

Police in Bristol, Connecticut are yet to confirm a motive for the shooting and despite releasing a handful of details about those involved, have described the circumstances as a "complex investigation".

Police Sgt. Dustin Demonte, 35, and Officer Alex Hamzy, 34, were shot and killed at the scene by Brutcher while Officer Alec Iurato, 26, was wounded.

Officer Iurato is said to have undergone surgery after being wounded by the thug.

Speaking of the brothers' reputation, the same neighbour who described "rowdy" Nicholas Brutcher added: "Nobody’s gonna like those boys, no matter what you say about them. I’m really mad at them."

Another neighbour spoke of his brother Nathaniel as a "man-child" and "skater punk", who was often "high as a kite".

That neighbour added: "Nate is high as a kite every time I see him. But cocaine doesn't drive you to call cops and shoot them. I don’t know much about [Nicholas], except he drinks a lot.

"The dude's always drinking. He'd be around, checking on his brother."

He also alleged that the mother, who is "crazier than a f***ing bag of chips" would be a "wreck" following the tragic shooting, New York Post reported.