The winter chill is now firmly upon Britain with the first heavy snowfall of winter and sub-zero temperatures expected to bring disruption across the country this weekend.

Amber weather warnings for ice and snow have been issued for large parts of Scotland and northern England on Saturday and Sunday – with cold weather, strong winds and heavy rain forecast across the rest of the country.

Freezing winds from Russia will collide with a weather front sweeping in from the Atlantic from midday tomorrow as overnight temperatures plummet to -8C (18F), while daytime highs are not expected to get above 2C (36F). 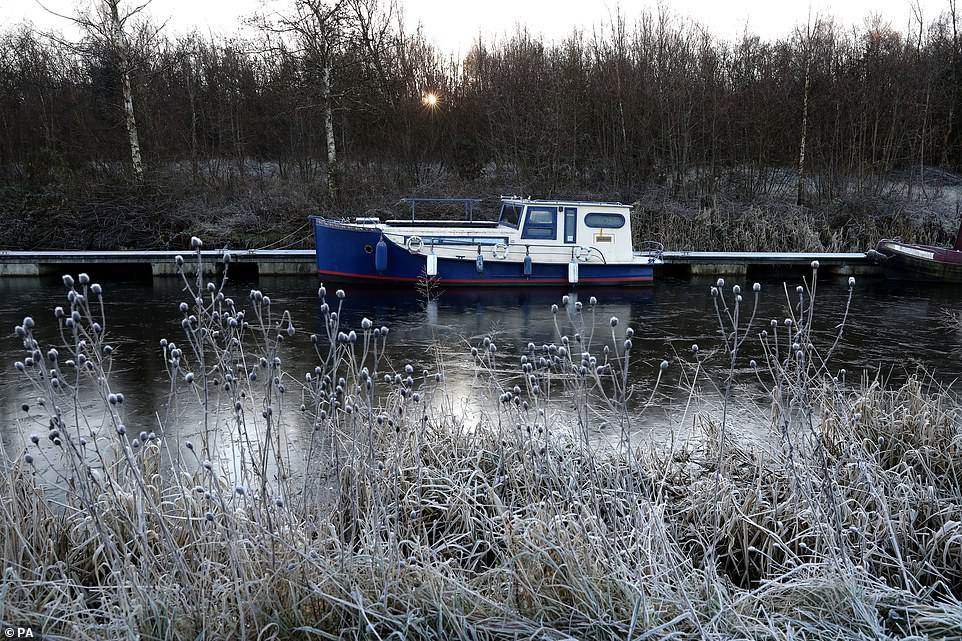 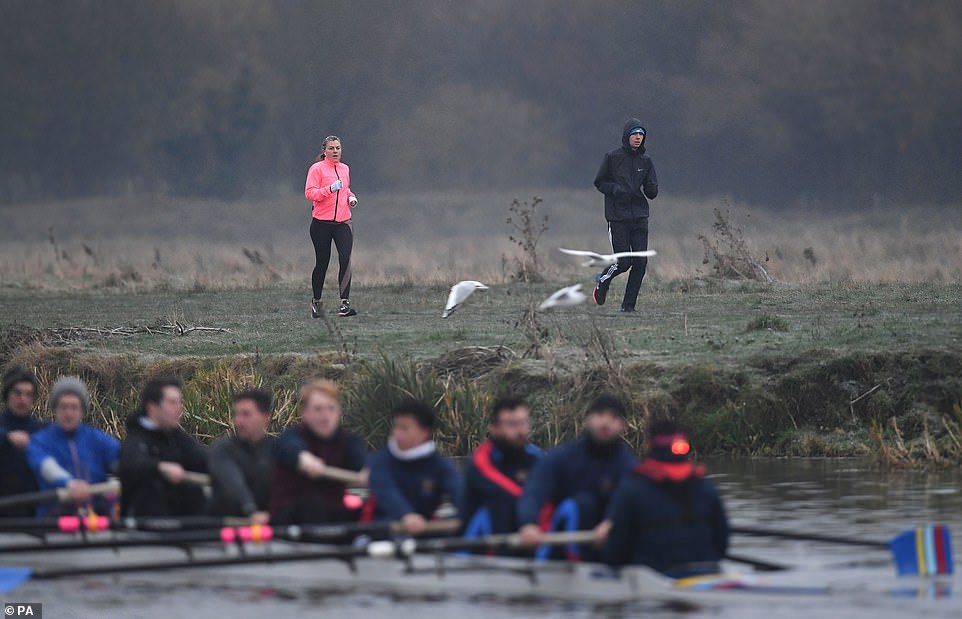 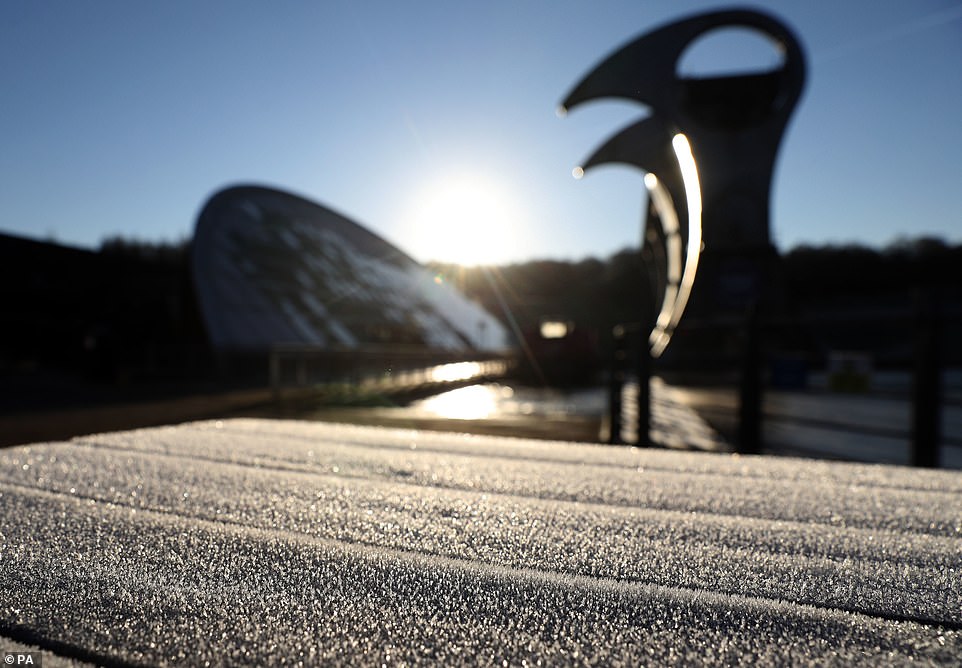 Winter sunshine today on the Falkirk Wheel, a rotating boat lift which connects the Union and the Forth and Clyde Canals 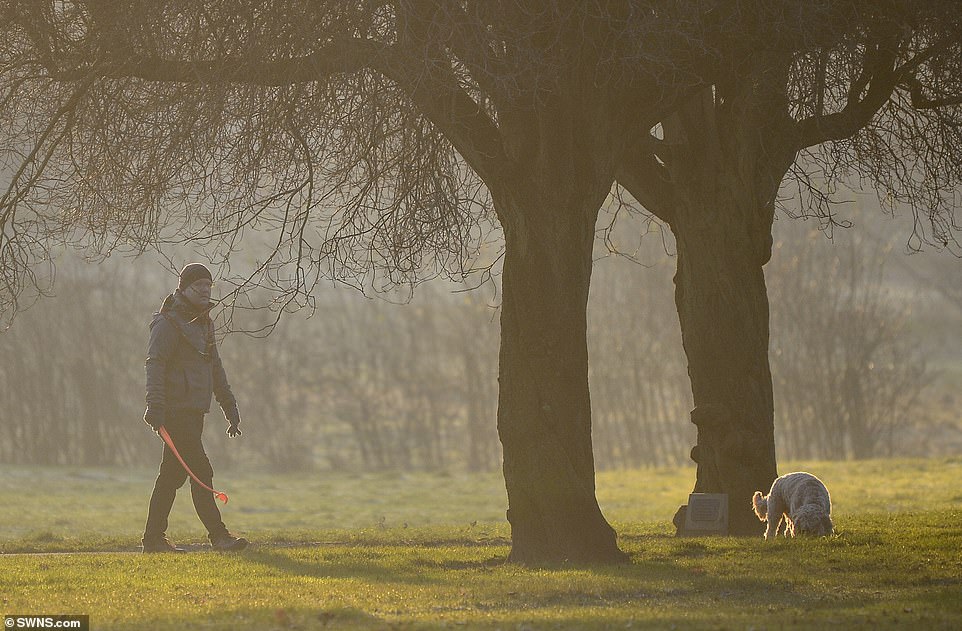 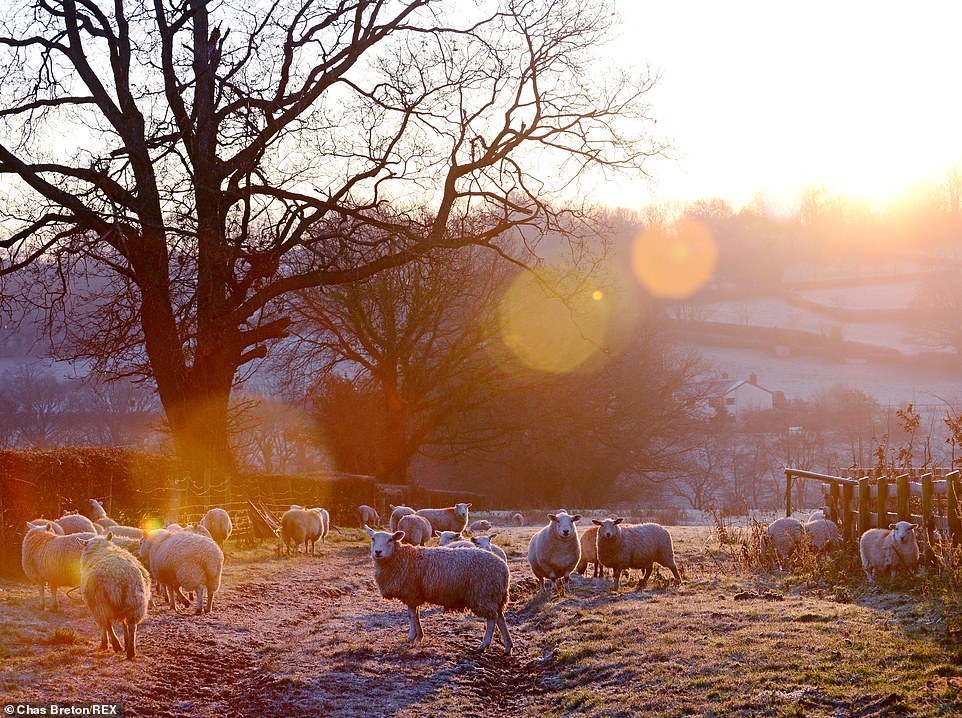 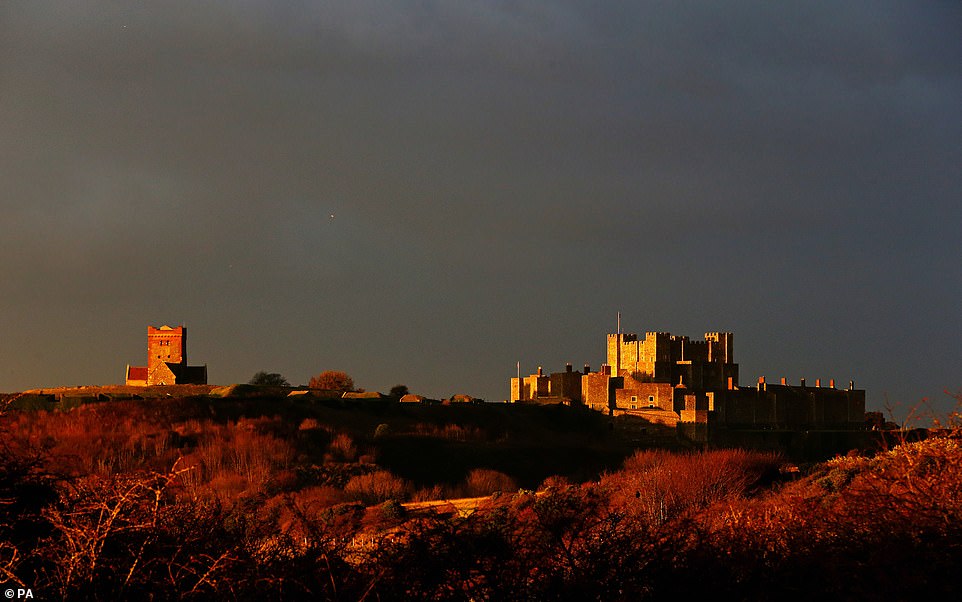 Dover Castle in Kent is pictured at sunrise today, as the first heavy snowfall of the season looks set to bring travel disruption

Motorists can expect to spend the early hours scraping ice off their windscreens, and the Met Office warned of the rare phenomenon of freezing rain in its amber warnings which run for nearly 24 hours from 9am tomorrow.

Heavy rain is also expected in most parts of the country today and may turn to sleet or snow at times in the north and east, mostly over hills. By the weekend, snow could fall as far south as the Midlands this weekend.

Forecasters predict up to 5cm (2in) of snow over the Cheviots, Lake District, Pennines, Welsh Mountains and North York Moors on Saturday. In the Highlands, up to 20cm (8in) could fall, with 40cm (1ft 4in) on the highest peaks.

If temperatures go lower than is forecast there could also be snow further south. However the cold will not stick around for long, with temperatures expected to get back up to 8C (46F) or 9C (48F) at the beginning of next week.

Met Office chief meteorologist Steve Willington said: ‘This weekend’s weather brings a range of winter hazards, with the possibility of heavy snow and blizzards in parts of Scotland and freezing rain for northern parts of the UK. 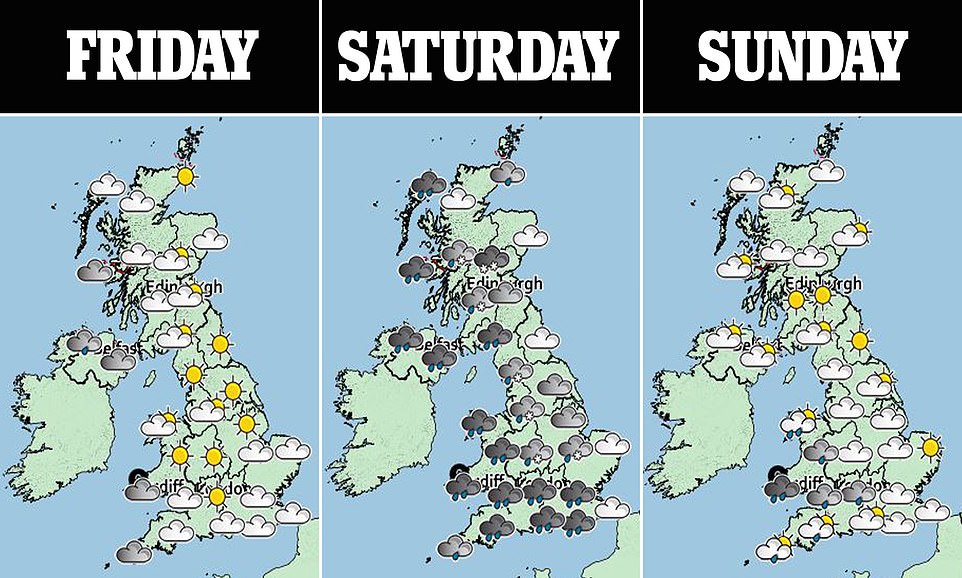 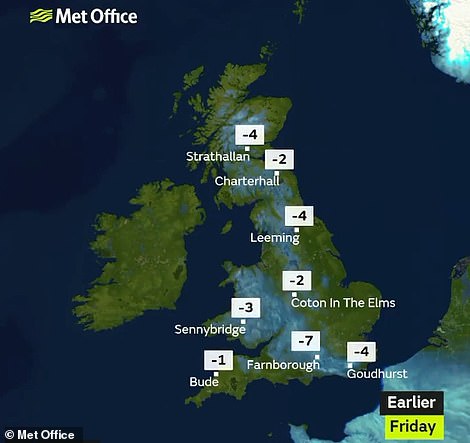 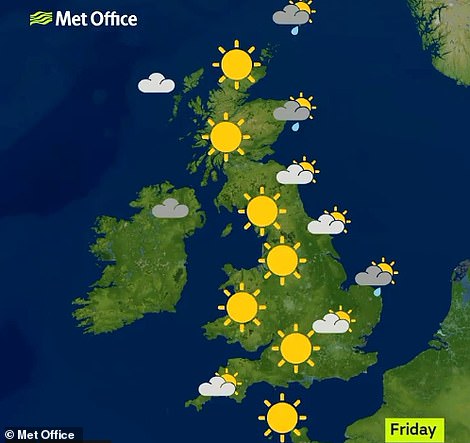 Temperates fell as low as -6.7C in Farnborough this morning (left) – although today will be sunny for most places (right) 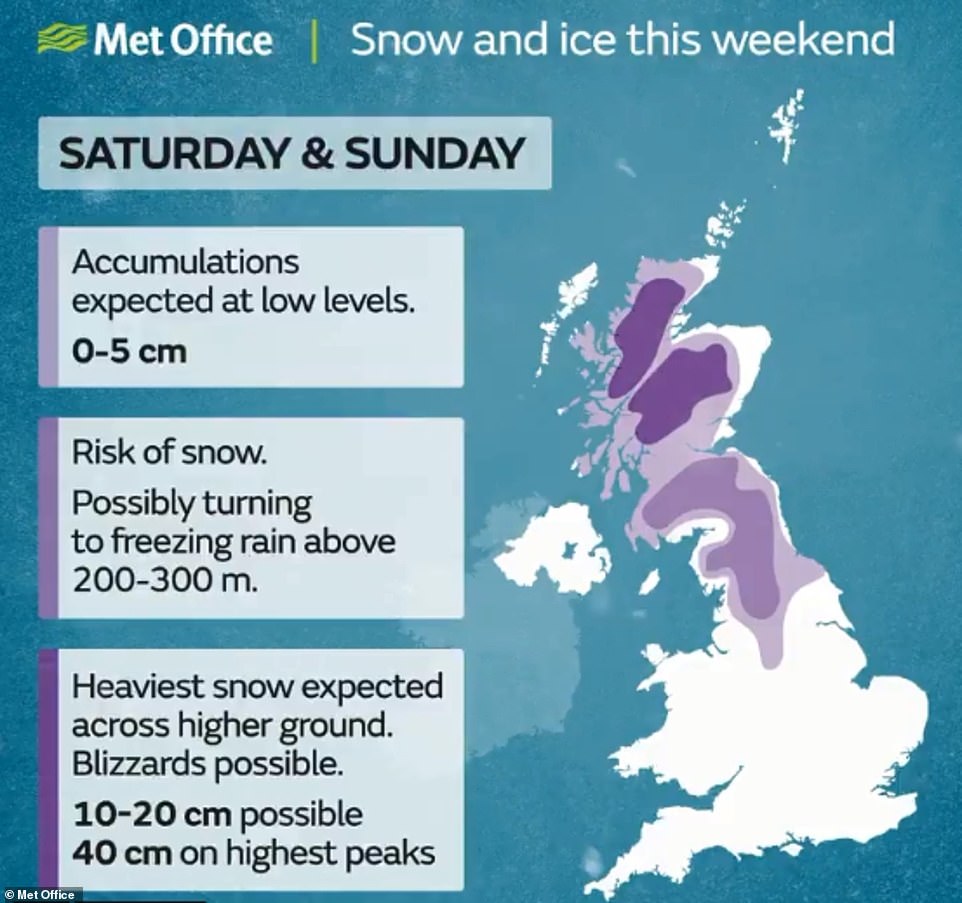 ‘As such, there is the potential for disruption to travel on the roads and possible delays or cancellations to public transport services, so we encourage people to keep an eye on the latest weather forecast warnings and to take care when travelling. 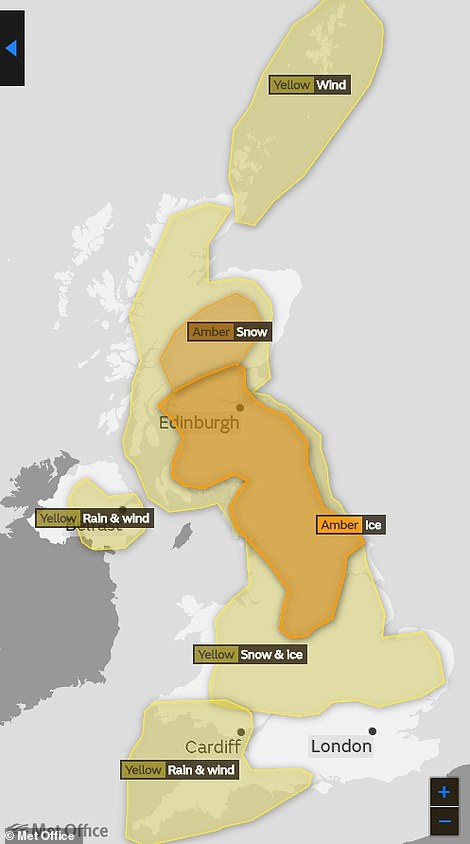 ‘At the moment, the heaviest snow is expected over higher ground in Scotland with the chance of drifting snow due to strong winds. Snow is also expected to settle at lower levels in Scotland and parts of northern England, with the risk of freezing rain and ice on Saturday night.’

Roads are likely to see the worst of the disruption, while flights in Scotland could also be affected. Wind speeds could hit 70mph in some areas. The grim forecast forced ferry operator CalMac to cancel today’s sailing between Oban and Castlebay on Barra.

It said it will be Sunday before services resume on the route. Cancellations were also made on the crossings between Fionnphort and Iona, Oban to Coll and Tiree, Tarbert to Lochranza and Berneray to Leverburgh.

Stein Connelly of Transport Scotland said: ‘This weather has potential to cause travel disruption, particularly over higher routes. As always, we encourage motorists to plan their routes ahead of time, leave plenty of time for your journey, follow Police Scotland travel advice and drive to the conditions.

‘Our operating companies have their winter services up and running, and will closely monitor the trunk road network to provide appropriate treatments where necessary. If you are planning to travel by rail, air or ferry, please check with your operator before setting off to see if your service has been affected.’

The Scottish Government said it is ready to activate its resilience control room tomorrow if required. A spokesman said: ‘We are aware of the weather warnings currently in place and are receiving regular updates from the Met Office.’

In its longer-range forecast, the Met Office said: ‘As we head through the remainder of the week and into the Christmas week it will probably stay unsettled, with further spells of wind and rain, these interspersed by some brighter and showery weather.  Temperatures on the whole look likely to be a little milder than average. 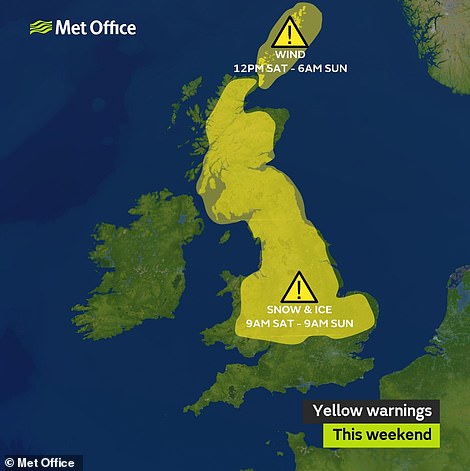 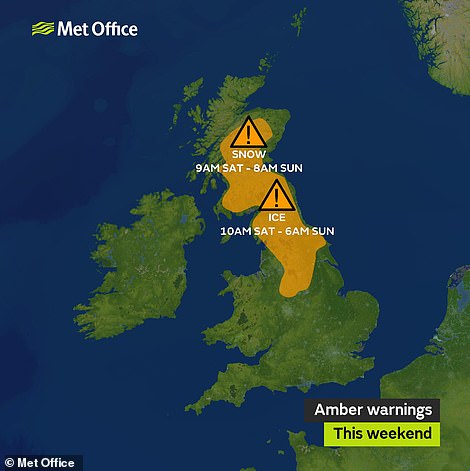 The Met Office has issued snow, ice and wind yellow warnings (left) and amber warnings for snow and ice this weekend (right) 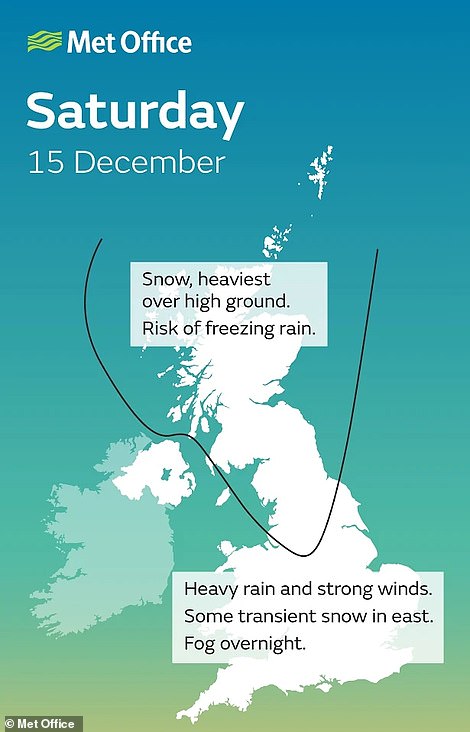 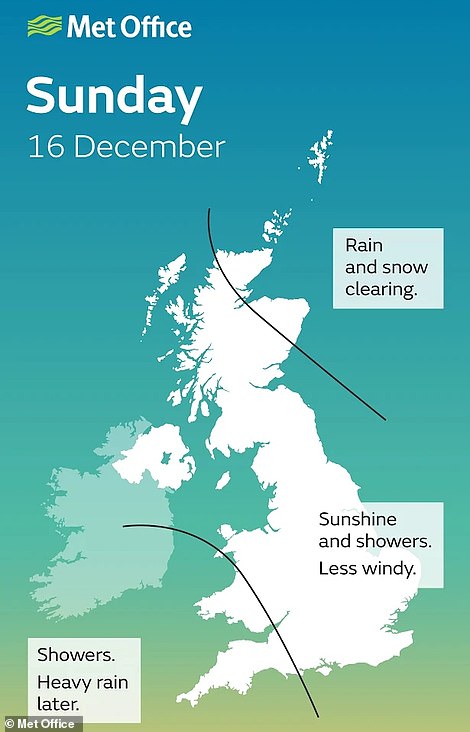 ‘However, in the period after Christmas Day there is an increased likelihood that milder spells will become short-lived and a colder and more showery northerly or northwesterly regime could become established across the UK.’

Today: It will be dry but cold with sunny spells for central, northern and eastern areas. It will be mostly cloudy along eastern coasts during the morning. Cloudier in the west and far south with a few spots of rain for Northern Ireland and western fringes of Scotland, Wales and south-west England.

Tomorrow: It will be cloudy and wet for many. Snow is expected for parts of Scotland and northern England, especially over hills Eastern parts will be drier but cloudy for much of the day. Very windy in the west with gales in the west.

Sunday: There will be sunny spells and showers, mostly in the west with some of these perhaps heavy and thundery. There will be rain at times for northern Scotland, which is likely to be wintry over the hills. Moderate south-westerly winds.

Monday: It will start bright for most but will become cloudy later with rain in the north and west. Breezy.

Despite bookmakers shortening their odds on a white Christmas, the Met Office says it is still too early to tell as they predict seven days in advance.

The last widespread white Christmas was in 2010 when 83 per cent of monitoring stations recorded snow on the ground – the highest ever recorded.

A white Christmas is defined as one snowflake seen falling in the 24 hours of December 25 somewhere in the UK. The Met Office uses sites across the UK, including Buckingham Palace, Aberdeen FC and Coronation Street in Manchester, to check for snowfall.

2015 was also a white Christmas, with 10 per cent of stations recording snow falling, though none reported snow lying on the ground.

Snow is more likely in January and March than in December, with snow or sleet falling an average 3.9 days in December, compared to 5.3 days in January, 5.6 days in February and 4.2 days in March.

Bookmaker Ladbrokes is offering odds of 2/7 for snowfall anywhere in the UK on Christmas day.

Alex Apati, of Ladbrokes, said: ‘It’s looking increasingly likely we’ll see snow on Christmas Day in the UK, with the odds dropping as fast as the temperatures.’

William Hill said Aberdeen is the most likely city to have a white Christmas in 2018.

Spokesman Rupert Adams said: ‘The last 24 hours have been very busy as the first real chill of the winter has hit. The odds now suggest a real chance of a white Christmas, with the Scottish cities very much the favourites.’

It is unlikely the snowfall this weekend will be as bad as the Beast from the East and Storm Emma in March, which brought the UK to a standstill as cars were abandoned in what the Met Office called a ‘cocktail of weather events’.

What do the weekend Met Office weather warnings say?

Freezing rain is expected to result in the rapid development of widespread ice, with very dangerous travelling conditions likely.

Heavy freezing rain is expected to develop during Saturday. This will result in the rapid formation of widespread ice on roads, pavements, trees and other structures. Freezing rain is rare in the United Kingdom but when it does occur the impacts can be very severe. This is due to the fact that it can form very quickly, it can be difficult to see and is incredibly slippery. Some sleet and snow is possible over the very highest ground and the freezing rain may also be followed by a spell of sleet and snow as the precipitation clears from the west. The freezing rain and sleet and snow will be accompanied by strong southeasterly winds which will pose an additional hazard to travel, in particular over high ground.

Heavy snow and blizzards bringing disruption to travel and infrastructure.

A period of prolonged and heavy snow is expected to develop through Saturday morning, before clearing from the west through Sunday morning. 5-10 cm of snow is likely widely across the area, whilst some areas could see 20 cm, perhaps as much as 40cm over higher ground. Strong south-esaterly winds will lead to temporary blizzard conditions as well as drifting of lying snow.

Heavy rain and gales will affect parts of Northern Ireland and southwestern areas of the UK on Saturday. The wettest areas could see 30 to 50 mm of rain in 6 to 12 hours, while winds could gust to between 50 and 60 mph, especially in exposed coastal areas. The combination of these factors on a busy shopping weekend, may add to potential disruption.

Scotland and most of England (down to Bedfordshire)

Periods of freezing rain, with snow in Scotland later, leading to some dangerous travelling conditions.

Freezing rain is expected to develop during Saturday, lasting into the early hours of Sunday. This may result in the formation of ice on roads, pavements, trees and other structures. Freezing rain is rare in the United Kingdom, but when it does occur impacts can be severe. This is due to the fact that it can form very quickly, it can be difficult to see, and is incredibly slippery. Freezing rain is likely to change to snow before it dies out across parts of Scotland, bringing some accumulations of 2-5 cm. The freezing rain and snow will be accompanied by strong southeasterly winds which will pose an additional hazard to travel, in particualr over high ground.

Severe gales expected over the Northern Isles and parts of Caithness.

A spell of very windy weather is expected over the Northern Isles and parts of Caithness on Saturday afternoon and overnight into Sunday. Southeasterly winds will be around 50mph with gusts widely 60mph perhaps 70mph at times.