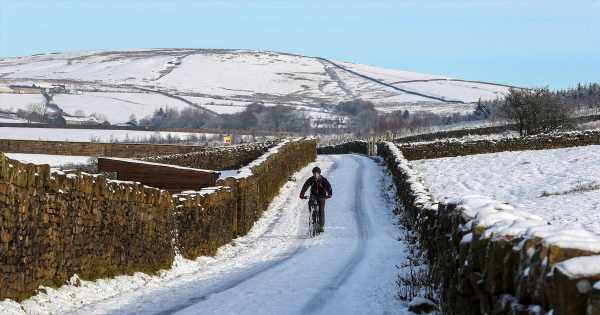 Saturday's snow will be followed by three days of heavy rainfall and floods next week, the Met Office has warned..

The forecaster has issued yellow weather warnings for parts of the UK on Monday, Tuesday and Wednesday with downpours expected to cause hazardous conditions.

The coldest temperature in England for nearly two years was recorded on Friday in Ravensworth, North Yorkshire where it dropped as low as -11.8C.

Those in East Anglia started this weekend with a thick layer of snow which had settled overnight, with the wintry downpours continuing into the afternoon.

Even some living in London will have woken up to the white stuff outside.

More than 3in of was recorded to have fallen across areas of eastern England as an arctic blast sweeps across Britain.

Parts of north-east England and Scotland recorded 2.7in of snow which had been lying on the ground from last week.

By the afternoon the worst of the wintry downpours had ended, with much of the UK expected to be clear and windy going into the evening.

But there were still 22 flood warnings across England, stretching from the South East to the North East, meaning “immediate action is required”, according to the Environment Agency.

Craig Snell, a Met Office forecaster, said: “Eastern England saw most of the snow on Saturday overnight, continuing into lunchtime, causing some difficulty for drivers as it turned to ice on the roads.

“Those in London and the South East who chose to have a lie-in would have missed the wintry downpours, though little dustings were seen in places just north of the capital.

“As the day progressed it became milder for many, clearing away the ice and snow and turning the day relatively bright.”

The lowest recorded temperature was in Northumberland, which saw a low of minus 5.4C overnight, while an area in Hampshire recorded a high of 11C during the afternoon.

Weather warnings are in place for Wales and the north-west of England for the beginning of next week covering Manchester up to Carlisle.