New York: The son of an Italian senator is taking Christie's to court in New York on Wednesday over the sale of one of the world's most expensive diamonds, which he claims was stolen from his family. 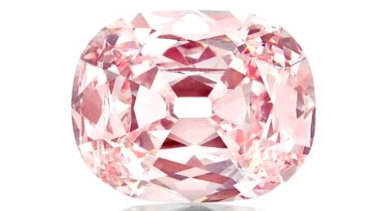 Amedeo Angiolillo, who lives in New York, argues that the auction house proceeded with the sale of the $40 million ($57.9 million) gem despite his raising concerns about its provenance. The Princie Diamond, as it is known, was bought by a member of the Qatari royal family.

Christie's, however, insists that the family members have no proof the diamond belongs to them and, furthermore, their client – who bought it from another family member – had every right to sell the stone.

The story began 300 years ago, when the 34-carat pink diamond was first recorded, in India. It came from the famed Golconda mines near Hyderabad, 640 km east of Mumbai. The diamond was from a fine "family" – other celebrated Golconda stones include the Agra Diamond, the Hope Diamond at the Smithsonian, and the Koh-i-Noor, which forms part of the Crown Jewels.

Angiolillo, founder of Italy's Il Tempo newspaper, died in 1973, aged 72. His glamorous widow, known as "the queen of the Rome salons" for her lively soirées of political debate, died in 2009.

When Amedeo Angiolillo went through his stepmother's extensive art and jewellery collection, he was shocked to find the diamond missing.

Unbeknown to him, his stepbrother Marco Milella – Girani's son from a previous relationship – had taken the stone.

Under Italian law at the time, as court documents explain, all of the late senator's possessions should have gone to his children, not his spouse, unless they were explicitly left to her.

So the lawsuit argues that the diamond belongs to his descendants – Mr Angiolillo and four grandchildren are the plaintiffs in this case.

But the auction house and its co-defendants said that the diamond, set in a ring, was a gift to Mr Milella's mother and so was owned by her when her husband died.

The auction house described the matter dismissively, as an "inheritance dispute among family members".