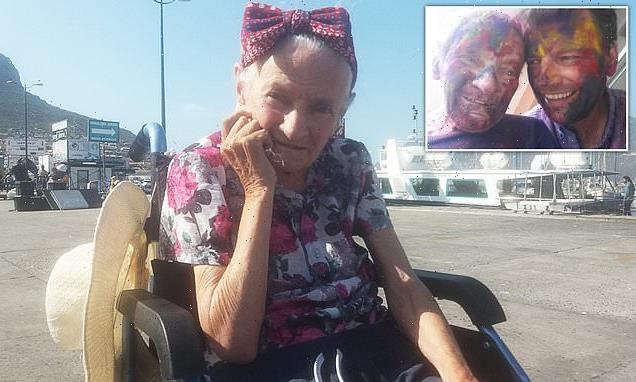 Devoted son, 44, took elderly mother on 18-month round-the-world trip to Nepal, Italy and South Africa after her Alzheimer’s diagnosis before her death aged 83

A loving son who took his mother to see the world as she deteriorated following an Alzheimer’s diagnosis has described how the 18-month trip helped to improve her condition in her final months.

Sean O’Sallaigh, 44, decided to take his mum Mary O’Niel away from Ireland for the winter, but the pair ended up travelling across the globe.

He said the trip made his late mother happy, and that she started walking and talking again while they travelled. 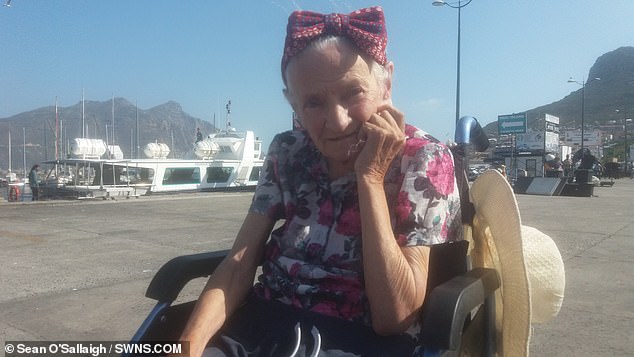 Thanks to Sean, Mary was able to take a walk on the sands in South Africa, roam across mountains in Italy and even take in a festival of colour in Nepal before her death in 2019.

Sean, who had been living in Rome when Mary was diagnosed in 2013 at the age of 77, described his late mother as ‘the best thing in [his] life.’

‘I thought Alzheimer’s was just a decline, but when we got to Nepal, she started to regain capabilities,’ he said. ‘She walked more, and she talked more, she even learned new words.

‘The neurologist told me positive and happy people become more so as Alzheimers progresses.

‘He was right – mum just seemed to get younger, but remained happy.’

Sean had been travelling back and forth to Dublin to care for his mother, but when the family began discussing moving her into a care home in 2018, Sean took matters into his own hands, feeling a home wouldn’t be best for her. 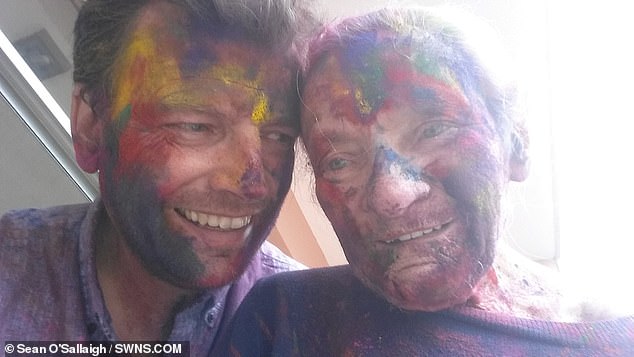 ‘I couldn’t leave her on her own by then. I had nurses coming in sometimes for respite care,’ he said.

‘But she had always been so independent. When I was young, she had asked my dad, who was an alcoholic and very difficult with it, to leave.

‘She did that at a time when women in Ireland just didn’t do that, and had fought to survive even though a lot of the community were very hard on her.’

He decided to take her away from the cold of Irish winter to Nepal.

‘I planned to come back after a couple of months,’ he said.  ‘It was warm and she was able to go out so much. 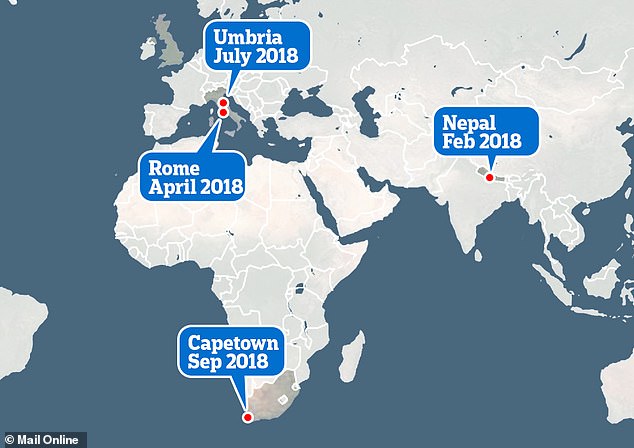 Sean and Mary travelled from their home in Ireland to Nepal, Italy and South Africa 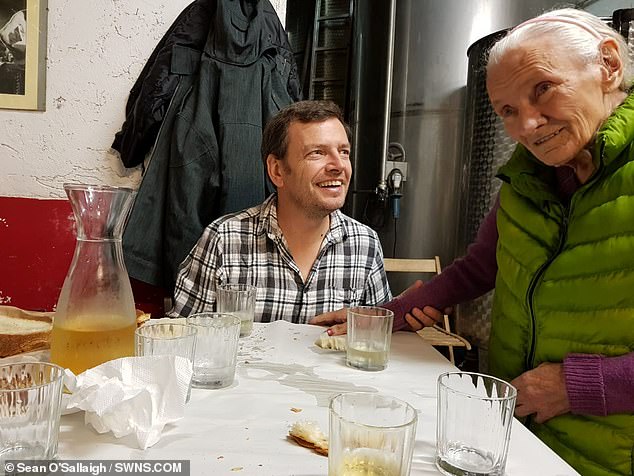 The mother and son visited Rome, when Sean owned a flat in their last 18 months together

‘We would walk by this lake and watch the children playing. They would come and sit with us at cafes and talk to her all the time and she to them.

‘I would take her hair brush out with us and the children would brush her hair.

‘They called her Grandma, and she would say ‘namaste’ to everyone.

‘We were there during a festival called ‘Happy Holi’, where they throw coloured powder up in the air.

‘They asked me if they could throw some over her and she loved it.’

Celebrated at the end of March this year, the festival celebrates the eternal and divine love of Radha and Krishna.

It also signifies the triumph of good over evil, the arrival of spring and end of winter, and is recognised as a festive day to meet others, and mend broken relationships. 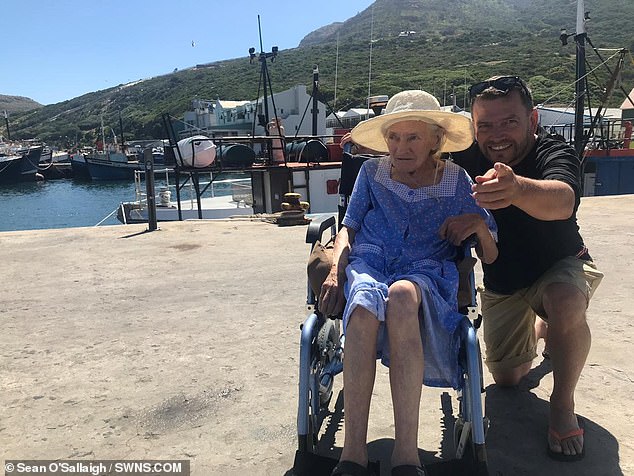 They visited Capetown in South Africa, where Mary was able to walk along the beach

Following Nepal, Sean took Mary to stay in his flat in Rome in April 2018.

‘She recognised Rome because I had taken her to my apartment loads before,’ he said. ‘There were favourite restaurants to visit and little churches she loved.’

In July, when Rome became too hot, the pair went to stay in the Mountains in Umbria with a friend.

‘She thought the cows and goats with bells around their necks were hilarious,’ Sean said.

‘Everyone she met in Italy talked to her and wanted to give her a kiss, she loved it.’

After a fall in May 2018, Sean needed the help of his friend Tony to care for his mother.

Five months later, and they headed to Capetown and despite Mary’s worsening condition, Sean did all he could to make sure she enjoyed the trip. 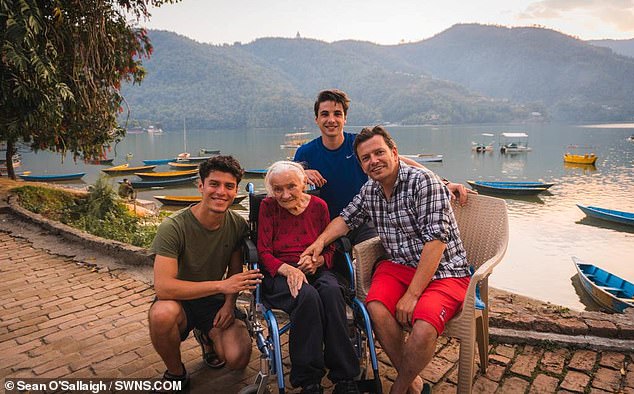 ‘I hired someone called Gloria to help out – Mum got on really well with her,’ he said.  ‘She used to put Mum’s hair in lovely little plaits which Mum loved.

‘In January 2019, we took Mum to the beach and she enjoyed putting her toes in the sand and watching the children playing.’

Mary died on May 24, 2019 in South Africa following a chest infection.

‘By the end, she would sometimes call me Daddy, and I did feel like a parent,’ Sean said.

‘When she passed away, I felt like I had lost my little girl.

‘I had to put my life on hold to look after her like that, but it gave me so much too.

‘I had to give up a relationship because I couldn’t give them both the attention they needed, and she had to be my priority just then.’

He said his travel company, Angel Tours, suffered as a result, but he said he now wants to focus on ensuring the business runs smoothly. 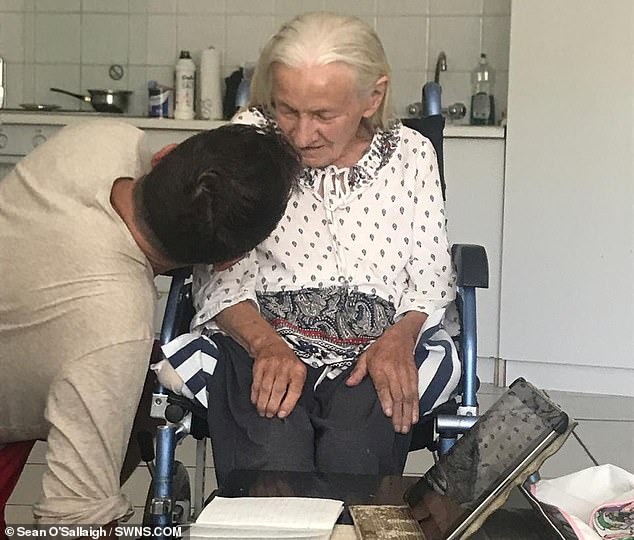 Mary began to deteriorate when they were in Capetown together

‘At work, I went down to answering calls and emails for a couple of hours a day, my company really suffered,’ he said.

‘All I want now is to make enough to keep things running smoothly.’

He said that he loved being able to spend so much time with her in her final years.

‘People thought she would be a burden but she just never was,’ he said.

‘I didn’t try to keep her in my world, I just let her decline into hers. She would happily wipe the table for an hour, and we would just laugh about it together.

‘I gave her a doll and she would talk to it and play with it – she thought it was a real baby.  If she got agitated, I would bring out the baby and it would bring her out of it right away.’

‘We had a really difficult time when I was young, and we only got through it because we had such an amazing mother. 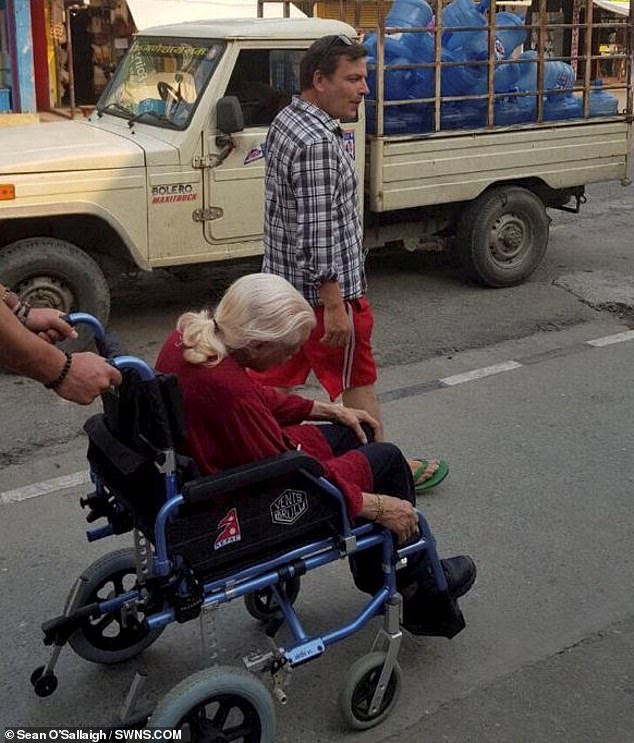 ‘Unconditional love is a thing you don’t get often, and she always gave it, even though she had a tough life.

‘I do feel terribly sad that my family didn’t see her again, but they weren’t able to help look after her, and she needed to be safe and happy.’