Russian President Vladimir Putin and his Chinese counterpart Xi Jinping met for the 25th time in Beijing on Friday – where the pledged to work even more closely together to ‘govern the world.’

Xi hailed China’s ties with Russia as he treated Putin to a state visit on Friday to bring the neighbouring giants closer in the face of US diplomatic and economic challenges.

The Russian leader joined Xi to review a military honour guard and greet flag-waving children at a welcome ceremony before talks in Beijing’s grandiose Great Hall of the People. 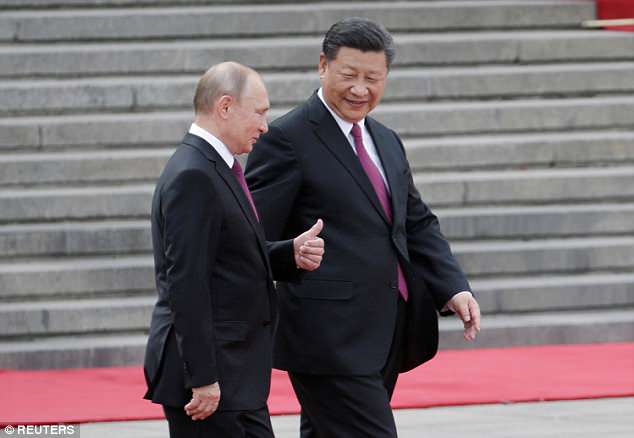 Putin told Xi that cooperation between their two countries is at an all-time high in a meeting that comes ahead of a summit featuring Russia, China and six Asian states.

‘Cooperation with China is one of Russia’s top priorities and it has reached an unprecedented level,’ Putin said.

Xi said the two countries have ‘always firmly taken the development of relations as a priority.’

‘No matter what fluctuations there are in the international situation, China and Russia have always firmly taken the development of relations as a priority,’ Xi told Putin.

The two nations have also ‘resolutely supported each other’s core interests,’ he said. 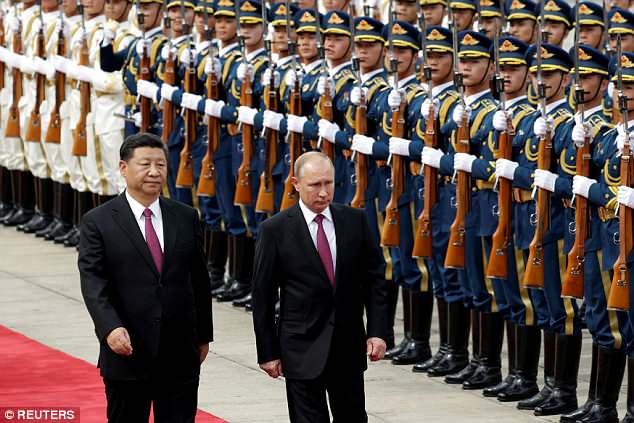 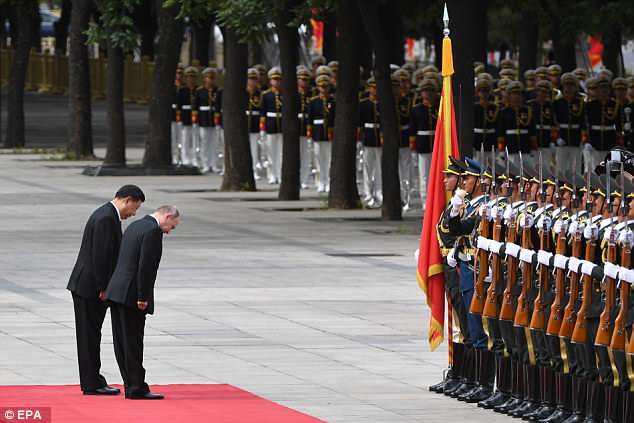 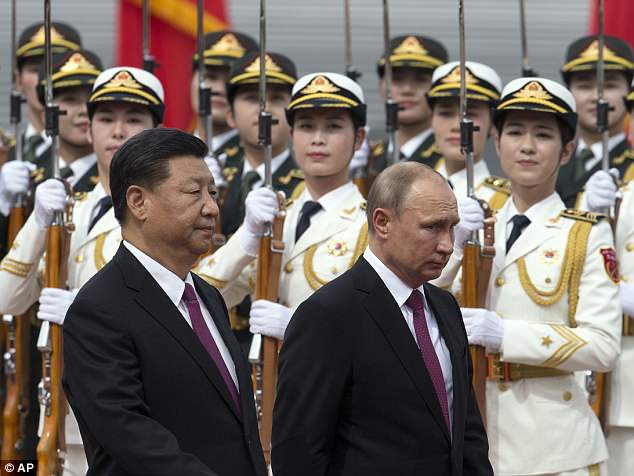 Xi said they have ‘developed trade ties and proactively participated in international affairs and global governance to promote a ‘community of common destiny’.’

The most powerful Russian and Chinese leaders in decades, Xi and Putin have forged closer ties as US President Donald Trump has labelled both countries as economic rivals that challenge US interests and values.

Russia and China have responded to the US national security strategy describing them as America’s top adversaries by vowing to further expand their economic, political and military cooperation.

They have also sought to strengthen the Shanghai Cooperation Organisation, a regional grouping they created, which meets this weekend. 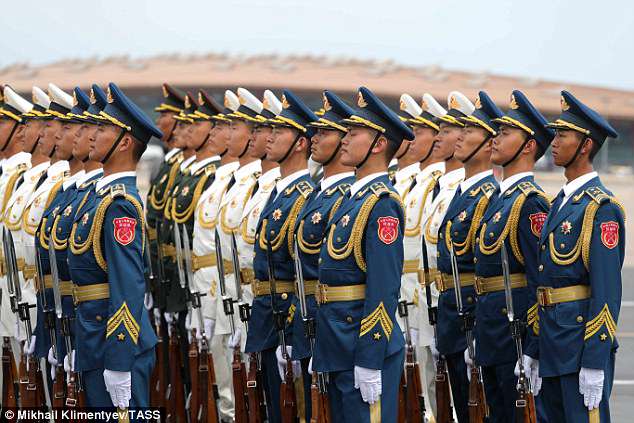 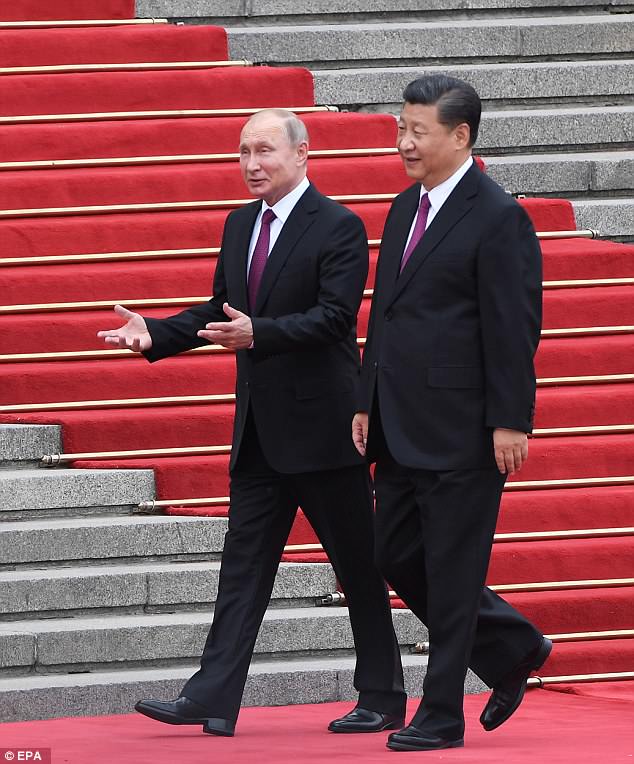 Putin, left, walks with China’s President Xi Jinping during a welcome ceremony outside the Great Hall of the People in Beijing

Further underlining the relationship’s importance, the visit comes just a month since Putin began his new term in office.

He said: ‘The relationship between Russia and China is a friendly, neighbourly one, developing in states in the spirit of over-arching strategic partnership.’

Following a formal welcoming ceremony at the Great Hall of the People in central Beijing, Putin first met with Premier Li Keqiang. 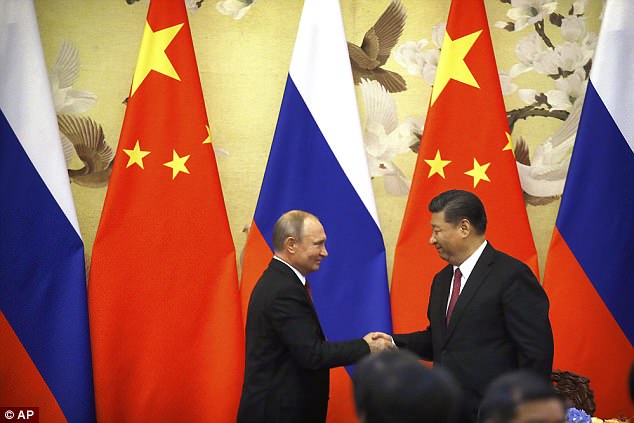 Putin, left, and Chinese President Xi Jinping shake hands at the end of a joint press briefing at the Great Hall of the People in Beijing 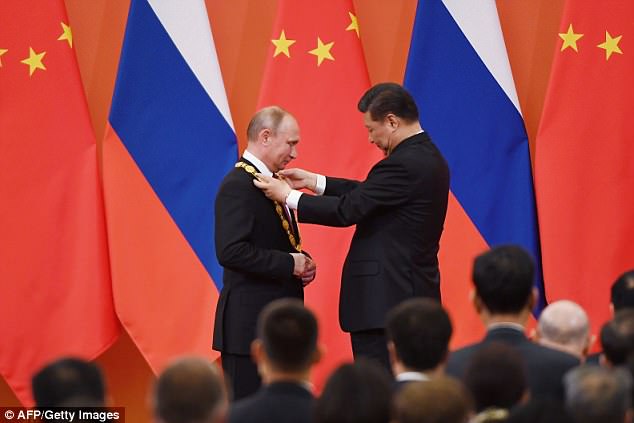 Xi presents the first Friendship Medal of the People’s Republic of China to Putin. The award is presented to foreigners who have who have made ‘outstanding contributions to China’s socialist modernisation drive, in promoting exchange and cooperation between China and the world, and in safeguarding world peace’ Vladimir Putin, left, and Chinese President Xi Jinping shake hands during a signing ceremony at the Great Hall of the People

Putin told him that Russia-China trade and economic ties have ‘gained a good tempo, and we are looking for new spheres of cooperation.’

Li said bilateral trade is expected to reach $100 billion this year and voiced a readiness to expand cooperation in both traditional and new spheres, including nuclear energy.

Bilateral trade shrank from nearly $100 billion in 2014 to some $60 billion the following year due to a sharp depreciation of the Russian currency. It has since partly recovered as the ruble has strengthened, reaching nearly $90 billion last year.

Russia has also increasingly turned to China as a market for its energy exports and a source of investment in infrastructure projects.

Meanwhile, analysts remarked on the similar leadership styles of the men.

Xi and Putin are ‘soulmates who want to make their countries great again’, Alexander Gabuev, senior fellow at the Carnegie Moscow Center, said. 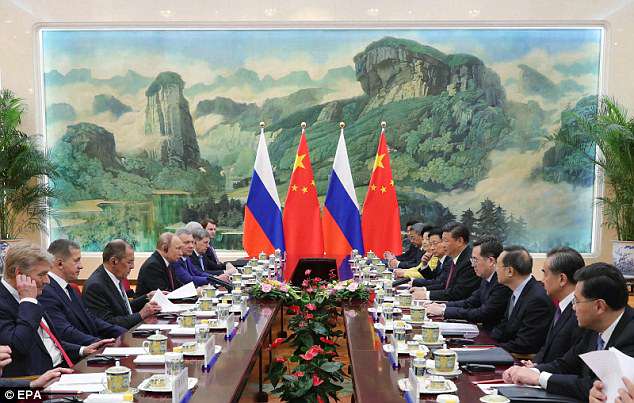 ‘Both share scepticism towards American hegemony and distrust US intentions, both are authoritarian personalistic rulers,’ he said.

Putin was re-elected to a fourth Kremlin term in March. That same month, Xi was given a path to indefinite rule when the the Communist-led rubber-stamp parliament lifted presidential term limits.

China is mired in tough negotiations with the United States to avoid a trade war, while Moscow has deep differences with Washington on multiple diplomatic fronts, including Syria and Ukraine.

Putin played up his bond with his ‘good friend’ Xi in an interview with China’s state broadcaster CGTN this week.

He said the Chinese president was the only state leader to celebrate his birthday with him, with the two sharing vodka and sausage.

Xi ‘is approachable and sincere’, Putin told CGTN. ‘But he’s also a very dependable man to work with.’ 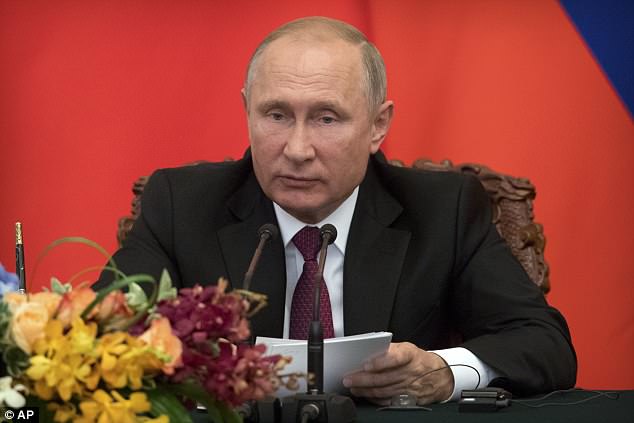 Maria Repnikova, director of the Center for Global Information Studies at Georgia State University in the US, said China makes Russia look ‘stronger and more relevant’ on the global stage.

For its part, Russia allows China to show the US that it has ‘other options’ in international negotiations, she said.

‘Trump’s policies justified (the) growing closeness, especially for Russia but also for China given the volatile relationship with the United States,’ Repnikova said.

But ‘it’s an asymmetrical relationship with Russia more dependent on China than vice versa, especially in the economic sphere,’ she said.

After the Beijing visit, Putin will join Xi at a weekend summit of the Shanghai Cooperation Organisation (SCO) in the eastern Chinese city of Qingdao.

Putin told CGTN that the SCO had ‘small’ objectives when it was founded two decades ago but that it was now evolving into a larger global force.

Iranian President Hassan Rouhani, whose country is an observer member of the SCO, will also attend the summit at a time when China and Russia are seeking to save the Iran nuclear deal following Trump’s withdrawal from the pact.