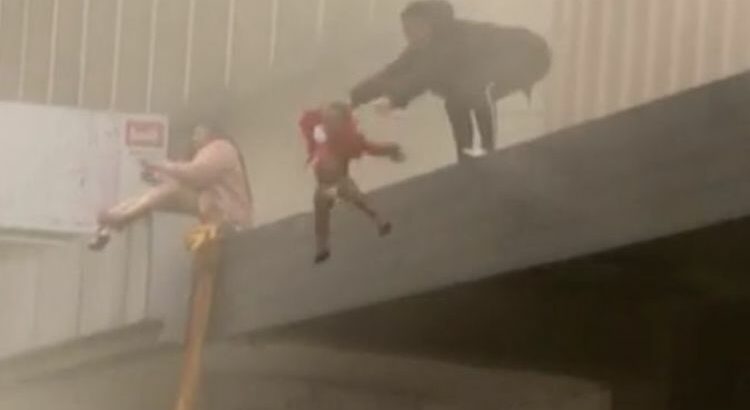 Rioting and looting in South Africa have caused chaos for many civilians. One mother in Durban was forced to throw her child off a building as looters allegedly started a fire. Protests initially erupted following the arrest of former President Jacob Zuma, who was convicted to 15 months in prison over contempt of court.

However, the demonstrations eventually descended into violence and looting leaving at least 45 people dead.

The child was safely caught by people below and the mother was eventually reunited with the child.

Neighbours and passers-by continued to help other stranded people in the building.

Due to the vast number of looters, security company workers have been forced to retreat and not engage.

A man who wished to stay anonymous told the BBC that he and his private security company have barely had any sleep over the last three days.

He told the broadcaster he suspects he has only had 2 hours of sleep in that time while the rest of his workers survive off energy drinks.

He added the looters have destroyed many buildings and has heard stories of three security guards being killed since the weekend.

They have retreated to their own neighbourhoods where they live.

He said: “We’ve gone to a place where we are going to watch them stealing.

“We are not interfering with them, don’t harm us.”

Former President Zuma was sentenced last month for defying a constitutional court order to give evidence at an inquiry investigating high-level corruption during his nine years in office until 2018.

Zuma’s foundation said there would be no peace in South Africa until the former president was released from jail.

In a tweet, it said: “Peace and stability in South Africa is directly linked to the release of President Zuma with immediate effect.”