A South Korean court has ruled the killing of dogs for meat is illegal, in a landmark decision which animal rights activists said could pave the way to outlawing eating canines.

The meat has long been a part of South Korean cuisine, with about one million dogs eaten annually.

But animal rights group Care last year filed complaints against a dog farm operator in Bucheon, accusing him of ‘killing animals without proper reasons’ and violating building and hygiene regulations.

He was convicted by the Bucheon City court, which ruled that meat consumption was not a legal reason to kill dogs, and fined him three million won (£2,100). He waived his right to appeal. 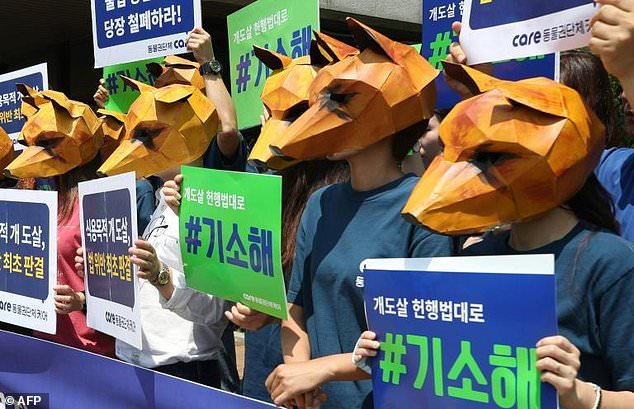 Consumption has declined in South Korea with the practice now something of a taboo among younger generations and pressure from activists mounting.

Authorities have invoked hygiene regulations or animal protection laws that ban cruel slaughter methods to crack down on dog farms and restaurants ahead of international events such as the Pyeongchang Olympics.

Care lawyer Kim Kyung-eun welcomed the ruling, made in April but with details only released this week.

She said: ‘It is very significant in that it is the first court decision that killing dogs for dog meat is illegal itself.’

The precedent ‘paved the way for outlawing dog meat consumption entirely’, she added.

Care leader Park So-youn said her group was tracking down dog farms and slaughter houses across the country with a view to filing similar complaints against them to judicial authorities.

She said: ‘Over the past decades, public discourse over dog meat consumption has shifted towards banning it.’

‘The dog meat industry will take greater heat because of the court ruling.’

A lawmaker from the ruling Democratic Party introduced a bill in parliament this week that would effectively ban killing dogs for meat.

The measure would limit the slaughter of animals for food to species classed as livestock, which does not include canines.

Some 30 activists rallied outside the National Assembly on Thursday, urging it to pass the measure.

But some South Koreans object to what they describe as cultural double standards.

Dog is usually eaten in the country as a summertime delicacy, with the greasy red meat, invariably boiled for tenderness, believed to increase energy. 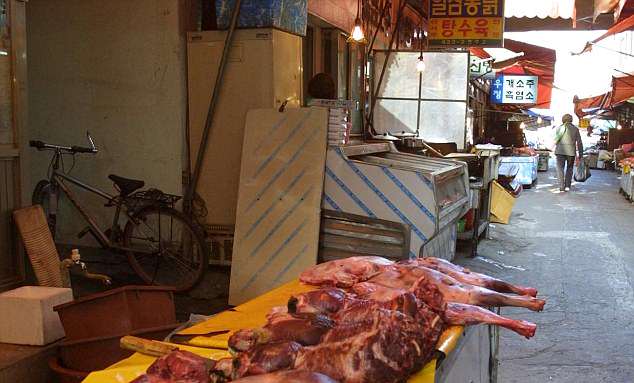 Dog meat for sale at Daegu market place in South Korea. The practice now something of a taboo among younger generations and pressure from activists is mounting

A survey last year found that 70 per cent of South Koreans do not eat dogs, but only about 40 per cent believe the practice should be banned.

Similar debates have emerged in other Asian nations where dogs are eaten.

China’s most notorious dog meat festival in the southwestern town of Yulin has continued to draw crowds despite international outrage.

The Bucheon court decision sparked angry protests from dog farmers, whose premises usually double as slaughter houses as the government does not license abattoirs to kill dogs.

‘This is outrageous. We can’t accept the ruling that killing of dogs for dog meat consumption amounts to killing animals on a whim,’ Cho Hwan-ro, a representative from an association of dog farms, said on YTN television.

There are some 17,000 dog farms across the country, Cho said, calling for the government to explicitly legalise dog meat consumption and license dog slaughter houses. ‘Otherwise, we’ll fight to the end,’ he added.

‘Dogs for eating and dogs as pets must be separated,’ he said, adding they were different breeds, fed differently and raised for different purposes.

‘Cows, pigs, chickens and ducks are all raised to be consumed and why not dogs?’ he said.