A Samsung pseudo space satellite parachuted from the sky and fell to the ground on a farm in Merrill, Michigan, on Saturday morning.

Nancy Welke of Merrill told the Gratiot County Herald that she and her husband, Dan, were preparing to let their horses out around 8:45 a.m. when they heard a loud crash in their front yard. Welke looked out the window and couldn’t recognize what she was seeing — but some might have characterized it as out of this world.

Outside, Welke found a four-legged object with an aluminum foil-wrapped box and solar panels attached to the top of it. Inside the box were two large cameras and one Samsung cellphone, according to Welke. The contraption had several Samsung plaques on it and wording on the sides of the box read “Space Selfie.” It was still humming and flashing when Welke decided to share the strange event on Facebook.

“Unbelievalbe [Unbelievable],” she wrote. “Look what just fell out of the sky and 911 is baffled and it’s caught up in our tree.”

Around the same time, Gratiot Central Dispatch warned motorists to avoid a nearby area in Wheeler, Michigan, where the “fire department has (the) roadway closed due to a large object caught in live power lines.” Some local residents including Welke had their power cut off for a couple of hours while crews removed the large, deflated balloon.

The split space contraction turned out to be a high altitude balloon system — officially known as a pseudo satellite.

A Samsung spokesperson released a statement Saturday to explain the incident.

“Earlier today, Samsung Europe’s SpaceSelfie balloon came back down to earth,” the statement read. “During this planned descent of the balloon to land in the U.S., weather conditions resulted in an early soft landing in a selected rural area. No injuries occurred and the balloon was subsequently retrieved. We regret any inconvenience this may have caused.”

Samsung Europe’s SpaceSelfie balloon is part of their “SpaceSelfie” campaign with idea that customers can get their faces in the Earth’s stratosphere via a Galaxy S10 5G smartphone. The phone receives photos transmitted from Earth and layers them over real-time shots above the planet. 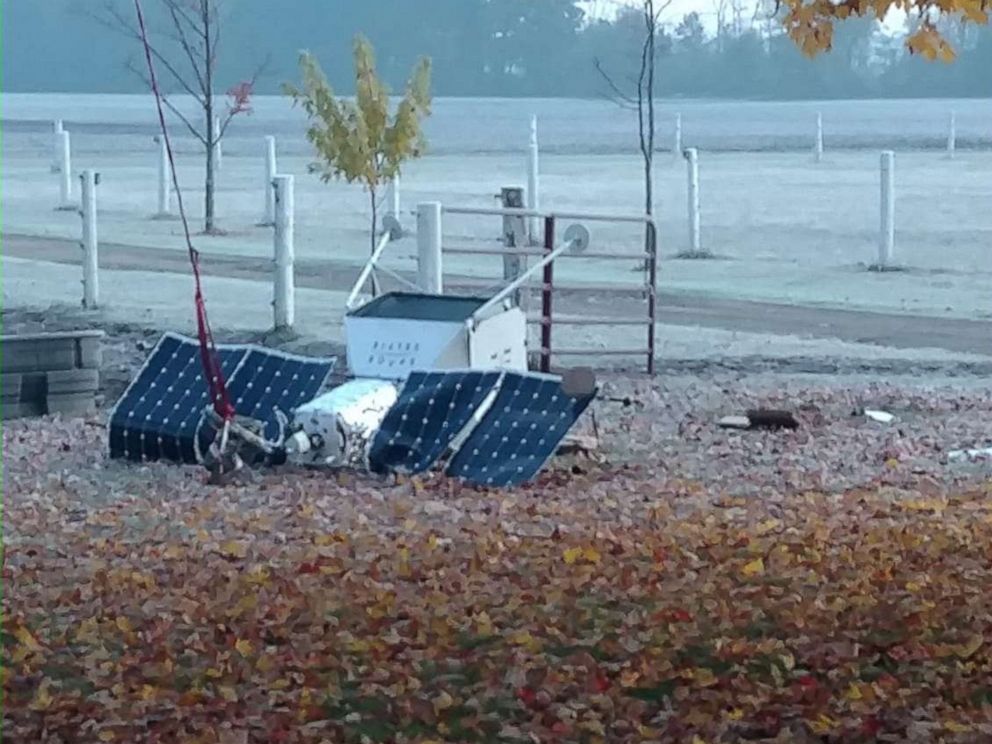 The balloon was launched just last week at a star-studded event in London where actress Cara Delevingne took the first photo. Advertisements said the service would be available to Samsung customers until Oct. 31.

But the person who picked up the contraption from Welke’s home told her it was launched from Iowa on Friday with the purpose of taking photos. The representative said he was from Raven Industries, a technology company based in South Dakota.

Regardless of the launch source, Welke’s Facebook video documenting where the device landed is continuing to spark the curiosity of strangers.

“You never know what’s going to happen,” Welke said in the video.

“Thank God there were no horses out.”