Madrid: Spaniards hunkered down in silent cities on Sunday after the government imposed sudden, severe restrictions on public life as the country's coronavirus death toll more than doubled overnight. 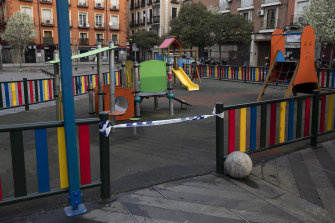 A playground taped off in Madrid on Sunday.Credit:Getty Images

Public places from city streets to beaches across Spain were deserted, with a strengthened presence of police, many wearing latex gloves and masks, ensuring people complied with the emergency measures.

All that could be heard on the empty streets of Madrid was the sound of families behind shuttered windows. People played video games, watched TV and sat out on balconies.

On Saturday night a social media campaign culminated in Spanish people applauding health workers for their efforts in tackling the crisis.

Residents also found ways to occupy themselves, one health instructor putting his skills to good use in Seville, while others played bingo.

All major newspapers carried a wrapper emblazoned with a government-promoted slogan "Together we'll stop this virus". Newspapers reported that police could issue on-the-spot fines of hundreds of euros for those who fail to follow the rules.

Bars, restaurants and shops selling non-essential items are shut for 15 days as the country enters a state of emergency. Schools are shut, keeping millions of children at home. 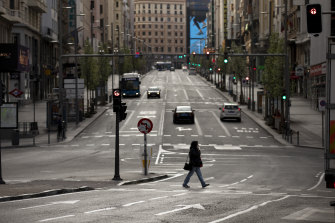 The silent streets of Madrid.Credit:Getty Images

In a further blow to Spain's economically vital tourist industry, Easter processions that typically draw huge crowds have been cancelled. Around 4400 inbound flights to Spain have been cancelled for the second half of March, the Spanish airlines association said.

Spain, where more than half of jobs are dependent on small or medium-sized companies, already has one of the developed world's highest unemployment rates.

The story in Spain is similar elsewhere in Europe, with most countries now introducing shutdowns.

UK: Britain's Health Secretary Matt Hancock said the government would set out emergency powers on Tuesday to ban mass gatherings and require the elderly to self-isolate. Britain is yet to restrict everyday activities, preferring a ‘herd immunity’ approach. Britain has 1140 confirmed virus cases and 21 deaths – a figure that doubled from Saturday to Sunday. 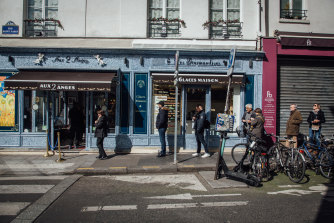 ‘Social distancing’ outside a Paris bakery on Sunday. All shops, bars and restaurants were closed. Only essential services, grocery stores and bakeries remained open for face-to-face customers. Fast-food outlets were closed, but were permitted to keep ‘drive-thru’ services open.Credit:Bloomberg

Italy: A lockdown continues in Italy, which has the most cases of coronavirus outside of China. Italians were left further isolated on Saturday when Italy's Transport Minister signed a decree banning overnight train travel, as well as passenger travel by ferry to Sardinia. Many in the north had been using trains to reach homes and families in the south, but the government is urging people not to return home as COVID-19 cases keep climbing.

France: All shops, restaurants and entertainment facilities were closed from Sunday, with 67 million people told to stay home unless absolutely necessary after infections doubled in 72 hours. The infection rate stood at almost 4500 on Sunday, including 91 deaths. Schools will remain closed indefinitely.

Germany: The German government tightened border checks on people coming from France, Switzerland and Austria. While Germany has thus far refrained from nationwide closings, places like Berlin have announced their own strict measures.

Austria: Chancellor Sebastian Kurz's government has limited people's movement nationwide. Austrians should only venture out for essential work, essential purchases such as food, and to help other people. The governor of Tyrol province also announced a total lockdown for his Alpine region, which borders northern Italy and is one of the worst-hit areas of Austria. Austria has confirmed 758 cases of the new coronavirus and one death.

The Netherlands: The Dutch government on Sunday was preparing to close all schools as it stepped up measures to combat the spread of coronavirus. The number of confirmed coronavirus infections in the Netherlands rose by 176 to 1135 on Sunday, with 20 deaths.

Norway: All airports and harbours will be closed from Monday, Prime Minister Erna Solberg told Norwegian media on Sunday. Norway has confirmed 1133 cases of the virus.

Slovenia: All public transport, including buses and trains, are closed from Monday. Authorities will also close all shopping centres, restaurants and bars. Only food shops and pharmacies will remain open. The country of about 2 million people borders Italy has 181 officially confirmed cases.

Bulgaria: The government has given all medics treating virus victims a pay rise as case numbers more than doubled to 51 over the weekend. Two people have died. The country has declared a state of emergency until April 13, closing schools and banning mass gatherings.