Five hundred Victorian electricians will be upskilled to install and repair electric vehicle chargers across Victoria under a new pilot program.

The state government-funded $950,000 program will be free for registered electricians and will begin in 2023 if it receives accreditation later this year. 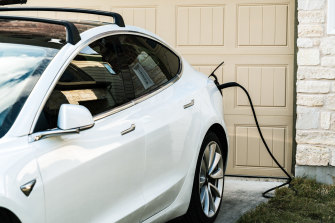 The number of EVs on Victorian roads tripled over three years.Credit:iStock

Electrical Trades Union Victorian branch state secretary Troy Gray said that in the 1970s the only people who had solar power were living in “hippie communes”, but sentiment towards climate-friendly energy had vastly changed.

He said electricians are now shifting their focus away from solar solutions to energy storage and infrastructure for electric vehicles (EVs).

“Within 15 or 20 years you will not be able to drive a block or two without seeing the chargers.”

He said electric vehicle chargers have a high amperage and could be “lethal” if not installed correctly, necessitating upskilling for already-qualified electricians.

Demand on public charging stations is increasing, with the number of EVs on Victorian roads tripling over just three years. Data from the state government released in March shows there were 10,311 registered electric vehicles in Victoria in June 2021, up from 3398 vehicles in June 2018.

There are now more than 960 charging stations in Victoria, according to EV charger map Plugshare.com.

Minister for Training and Skills Gayle Tierney said there was “momentum” building up around EV purchases in Victoria, and the infrastructure needed to grow as demand increases.

Premier Daniel Andrews and Prime Minister Anthony Albanese are in lockstep over a target to cut greenhouse gas emissions to zero by 2050, with the federal government aiming for a 43 per cent reduction by 2030.

“This is a really exciting opportunity for electricians to move into new green clean technology that we have here in Victoria,” Tierney said.

“It’s about making sure that current electricians are qualified to work on new technologies that are becoming available.”

During the election, Albanese promised to double investment in clean transport to $500 million, part of which will be used to build EV chargers on highways crossing the Nullarbor and between Broken Hill and Adelaide.

According to the Electric Vehicle Council, EVs are about 70 per cent cheaper to run per kilometre than conventional cars, saving the average driver $1600 on fuel per year.