Ben Schnellenberg was looking forward to spending a lot of time with his newborn son Levi, but never imagined they’d be locked down together 23 hours a day.

The impact of COVID-19 has completely altered the new dad’s first experiences of parenthood, which began with him being restricted from joining his partner when she went into hospital in the early hours of labour. Due to social distancing policies, he wasn’t allowed in the delivery suite until his wife had received tests and was set up for birth. 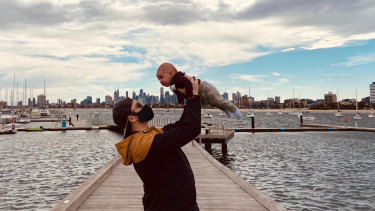 “Sitting in the car, unable to call and not knowing what was going on was quite a harrowing experience,” said Mr Schnellenberg, who will mark his first Father's Day on Sunday.

“I was lucky to be allowed to join for the final stages of labour and can honestly say as a first-time dad, I have never felt so helpless and proud at the same time,” he said.

Since becoming a dad in lockdown, Mr Schnellenberg, an account manager, has embraced working from home as an opportunity to be more actively involved in Levi’s development.

“Turning around after a challenging meeting, scooping him up and then reading him a book, only to then be thanked with an ear-to-ear smile and then a small vomit. It’s those special moments,” he said. 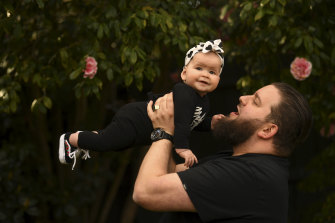 Jeremy Prince, with his six-month-old daughter Poppy, says one upside of lockdown has been spending more time with her. Credit:Penny Stephens

For South Caulfield procurement manager Jeremy Prince, the birth of his daughter Poppy in February followed by lockdown three weeks later was not what he had imagined first-time fatherhood to look like.

“Everything about it is different, our social and physical connections are almost entirely virtual. Our human interaction is limited to each other, we really spend every waking minute together,” he said. 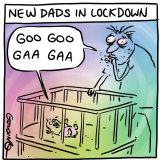 “It’s hard not to get swept up in the paranoia and hysteria, asking yourself: ‘Will I be OK? Will my family be OK? What about the baby?’” he said.

First-time dad Nicholas Loewy of North Caulfield has also found the lack of social opportunities daunting while raising a newborn in lockdown.

“It has been hard being far away from family and friends and not having that 'village' to help raise our son,” he said.

Despite the challenges, local community and support groups have provided a shoulder to lean on for these new dads.

“Speaking to other young parents in the same situation and hearing what they have gone through is very therapeutic and helps deal with any fatherhood challenges during these times,” Mr Loewy said.

“I have a ‘Lovable Soccer Dads’ Whatsapp group where we are all married with kids. This has been a huge help in feeling supported and connected through the isolation and social distancing,” Mr Schnellenberg said.

For Mr Prince, overcoming the initial scary phase of fatherhood through the pandemic has given him more appreciation for the time spent with his family and the benefits of being present for all the first milestones of his baby’s life.

“Being a dad is a truly awesome and rewarding experience. The greatest reward is seeing my daughter’s face light up every time I walk into the room; she is truly a daddy’s girl.”