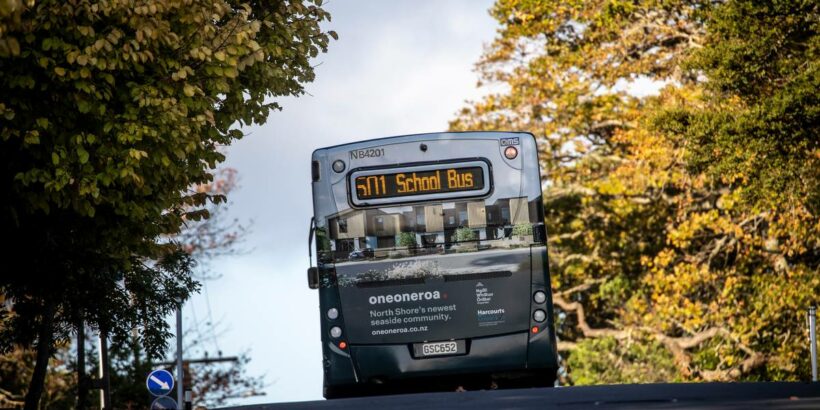 Nearly $700,000 worth of fines have been handed out to speeding bus drivers in the past five years, including one who was clocked going 61km/h over the limit.

The Herald can reveal more than 10,500 tickets were issued to Auckland bus drivers and a further 553 fines, worth almost $83,000, were issued to those who were caught running red lights.

Fines range from $30 to $630 depending on how fast the driver was going – but those caught going more than 50km/h over the limit resulted in a court summons for careless, dangerous or reckless driving

Two of the worst offenders were clocked in 2018 doing 111km/h and 109km/h in the 50km/h zone on Great South Rd between Beatty St and Bairds Rd, Otahuhu.

The figures have come as a surprise to the Public Transport Users Association and the union that represents a large number of drivers who work for NZ Bus.

“There’s absolutely no excuse for exceeding the speed limit and putting their passengers, themselves and other road users at risk,” said Gary Froggatt, president of the Auckland Tramways Union.

“It’s a bit of a concern for the safety and well-being of passengers that bus drivers are risking speeding,” he said.

But it was the high speeds that really concerned Reeves.

“A bus driver doing 111km/h in a 50km/h zone – that driver needs to be stood down from operating public transport. You can’t forgive a driver that’s doing that in a large bus in an urban zone. That’s absolutely ridiculous,” he said.

He suggested Auckland Transport consider requiring all buses to have governors on the engine to prevent them from being able to go over 100km/h as they did in some other countries, or have more stringent vetting of drivers.

Running red lights was equally as dangerous, Reeves said. “If you get hit by a bus you’ll know about it. Only one vehicle wins in those circumstances.”

As for the increasing number of tickets, he wondered if increasing congestion and lowered speed limits on many roads was making it harder for bus drivers to stick to their timetables causing them to speed or run red lights to make up time.

The police data, released to the Herald under the Official Information Act, showed the number of speed camera tickets issued to buses in Auckland climbed steadily from 1755 in 2016 to 2818 in 2019.

The number then dropped to 1716 last year, probably a reflection of less traffic on the road during Covid-19 lockdown periods.

Drivers were most commonly caught speeding through or near the SH20 Waterview tunnel, followed by the route along Great South Rd between Beatty St and Bairds Rd and then on in the Dome Valley between Waiwhiu Rd and Forestry Rd.

For red light runners, the number of buses stung with the $150 fine each year rose from 21 in 2016 when there were only two cameras in the city to 223 in 2019 across 18 cameras. As with speeding tickets, the number dropped in 2020 with 147 infringements recorded across 25 cameras.

The intersection of New North Rd and Blockhouse Bay Rd, which has had a red light camera since 2018, was the worst spot with 114 tickets issued at a value of $17,100.

Froggatt said he was shocked by the number of speeding tickets dished out.

He said sticking to tight timetables caused some bus drivers to speed or run red lights but they were encouraged to let their bosses know if the routes could not be completed on schedule so they could work with Auckland Transport to alter it.

Froggatt said he expected ticket numbers would have declined because each bus had a device which recorded speeds and signalled the driver if it detected they were going too fast.

Bus drivers had to pay the fine for any traffic infringements themselves and, in the case of NZ Bus, were penalised with anything from a written warning to dismissal, he said.

He was less surprised about the number of drivers running red lights and highlighted the New North Rd/Blockhouse Bay Rd intersection as problematic because the phasing made it hard to turn right, causing frustrated drivers to push the limits.

Ritchies Transport director Andrew Ritchie said while 10,540 speeding tickets sounded like a lot it became “more of a fair figure” when you considered the hundreds of thousands of kilometres drivers travelled.

“People get a bit careless and forget and get a speed camera ticket,” he said. “The average speed for a bus in Auckland is about 16km/h.

Ritchies drivers paid their own fines as well, he said.

More concerning to him were red light runners but he said his staff received very few of those tickets.

Auckland Transport spokeswoman Natalie Polley said they were always working with operators to ensure bus services remained one of the safest ways to travel.

She said AT monitored events and altered light phasing when issues were identified.

Safety, performance and operator health and safety were taken into account when companies were awarded contracts which would next take place in 2023, she said.

She said driver distraction detection systems had been trialled and would be installed in all buses in the coming years. AT was also working with police to improve the sharing of information about traffic incidents and infringements.

Auckland Transport is also supporting the Vision Zero programme to end road deaths, largely by reducing the speed of vehicles on the road.

Auckland’s other major operators Go Bus and NZ Bus could not be reached for comment.