Spitfires, tanks and armoured cars (and, yes, Nazis) descend on Devon beach for re-creation of crucial D-Day training which began 75 years ago

A huge event featuring US and British World War II vehicles along with enthusiasts in uniforms has taken place at the site of a training ground where troops prepared for the D-Day assault on the Nazis.

A convoy of a hundred and ninety war vehicles made their way onto Saunton Sands, at Braunton Burrows in North Devon, while in the skies above, a Spitfire was due to flypast. 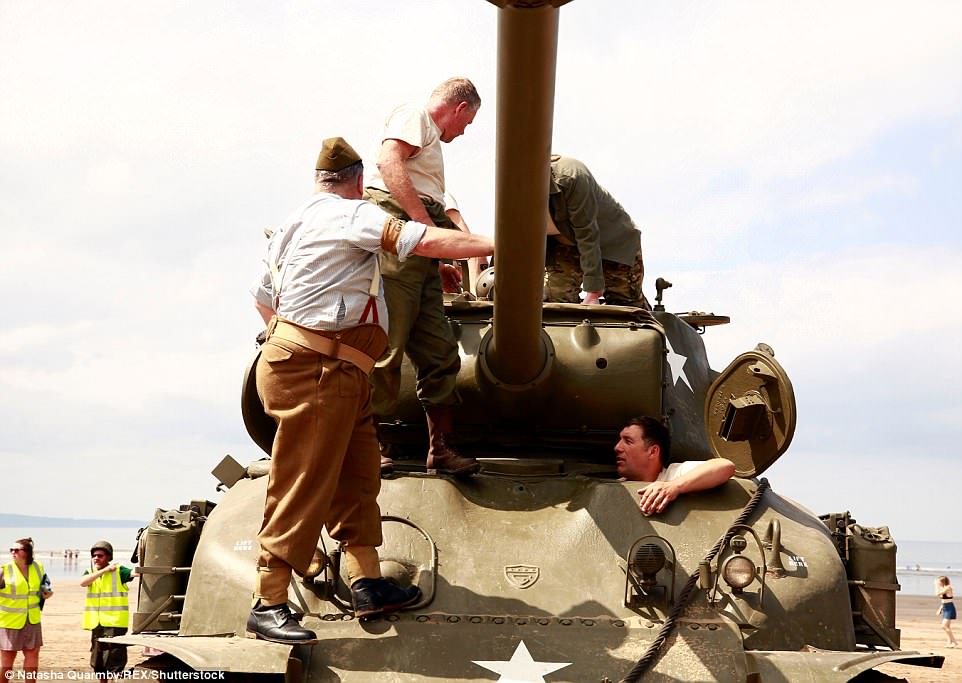 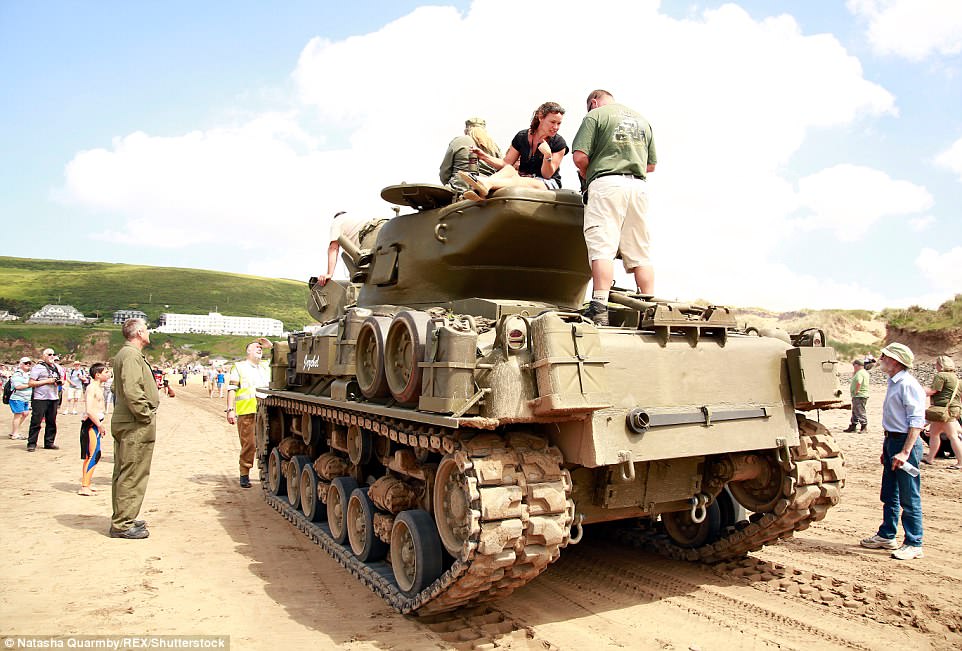 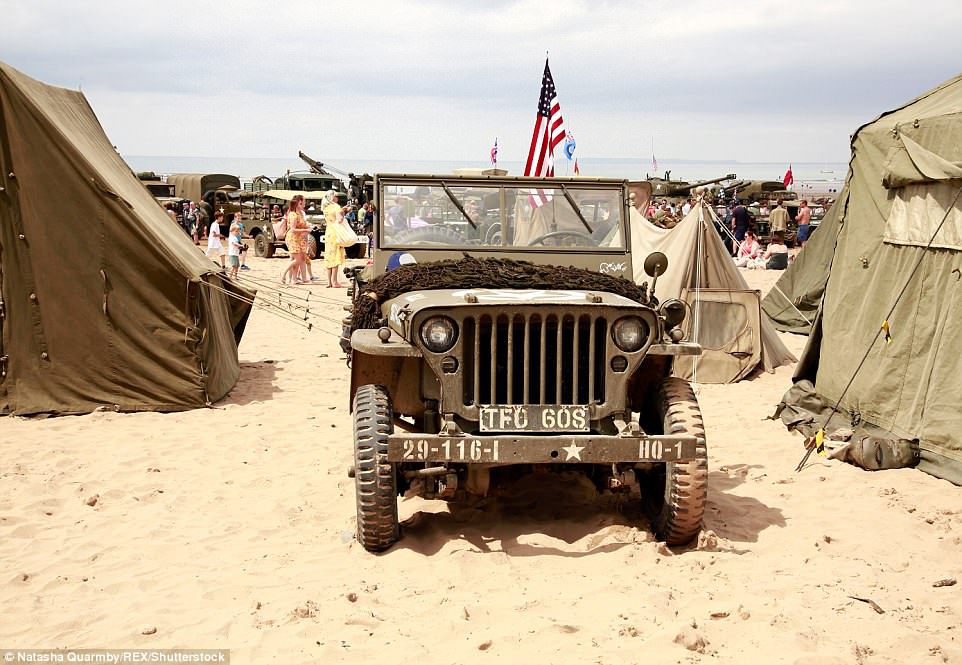 A US Army jeep sits on the sand with some of the many other vehicles taking part. During the war, there would have been thousands of American troops stationed in the area 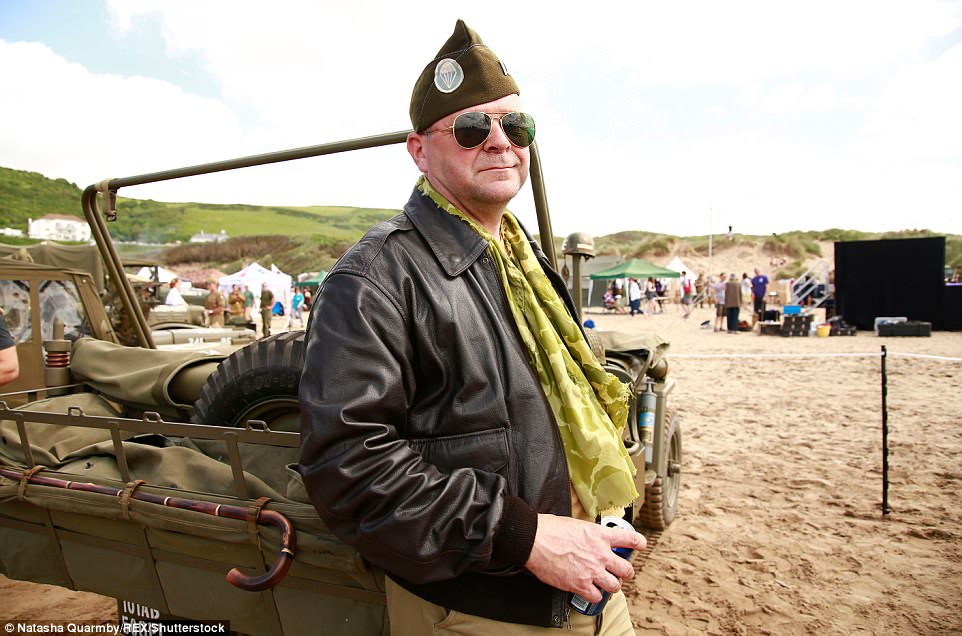 A participant pays homage to the history of the area with his United States Army uniform and jeep. The Americans were forced to accept the area for training as the British had taken all the other ones 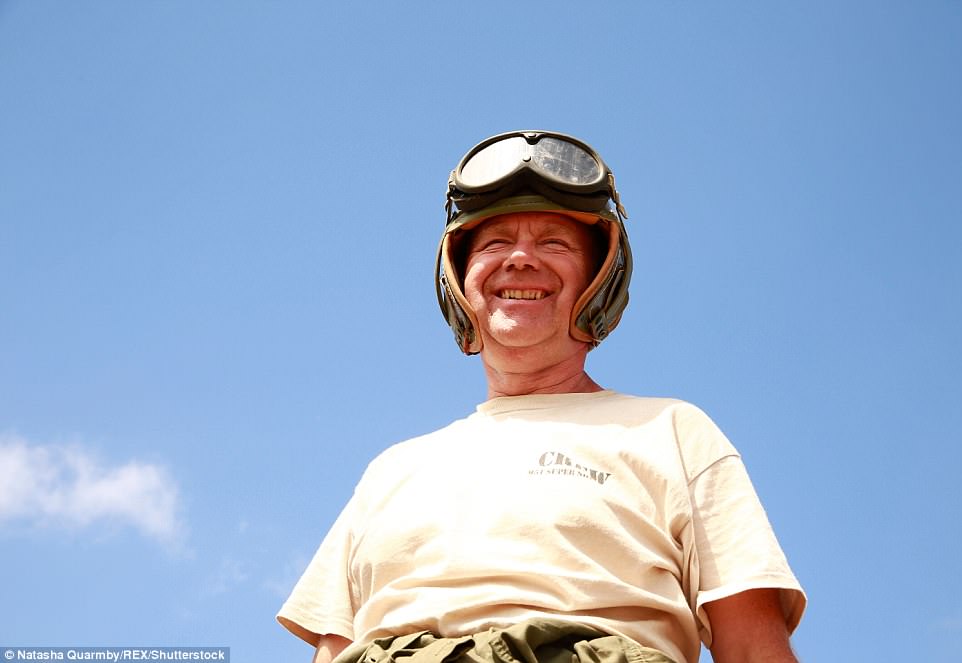 A tank crew member stands on top of his armoured vehicle.  During the war, the 16 square miles of the training area reverberated to the sound of explosions

The re-enactment groups taking part are are made up ‘Americans’ of First Wave 44 and 29th Infantry Division along with the British 2nd Devons Battalion, and the German 304 Panzer Grenadiers.

The event is in its fourth year and 2018 marks the 75th anniversary of the US Assault Training Center, North Devon which was based around Braunton Burrows and the surrounding beaches.

It features ten miles of Atlantic coastline, beaches, cliffs, headlands and sand dunes and was absolutely vital for the success of the D-Day landings. 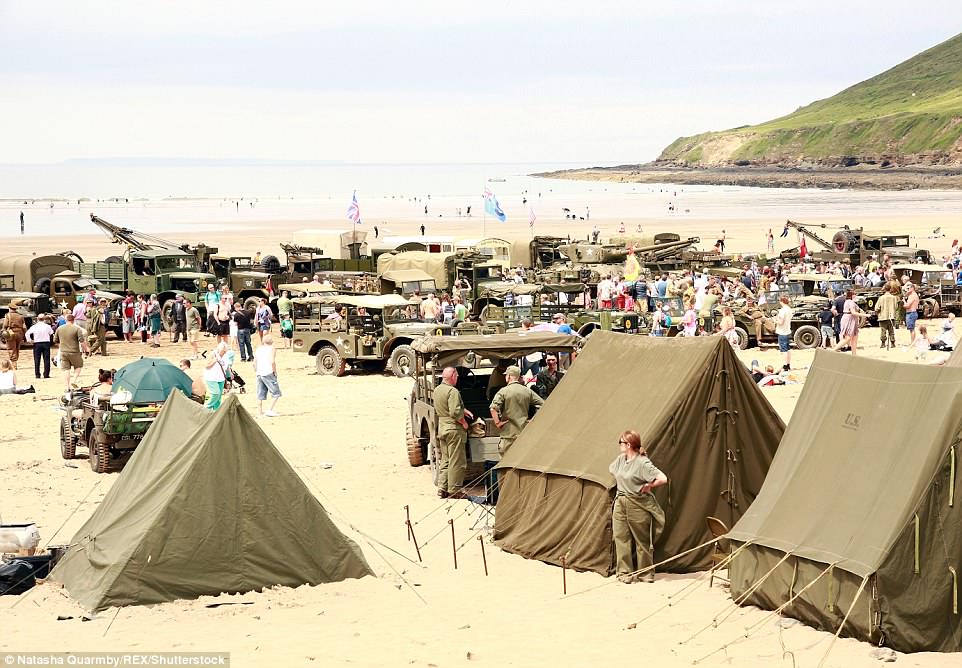 In total 190 vehicles from World War II are taking part in the event. Some of them can be seen parked on Saunton Sands beach 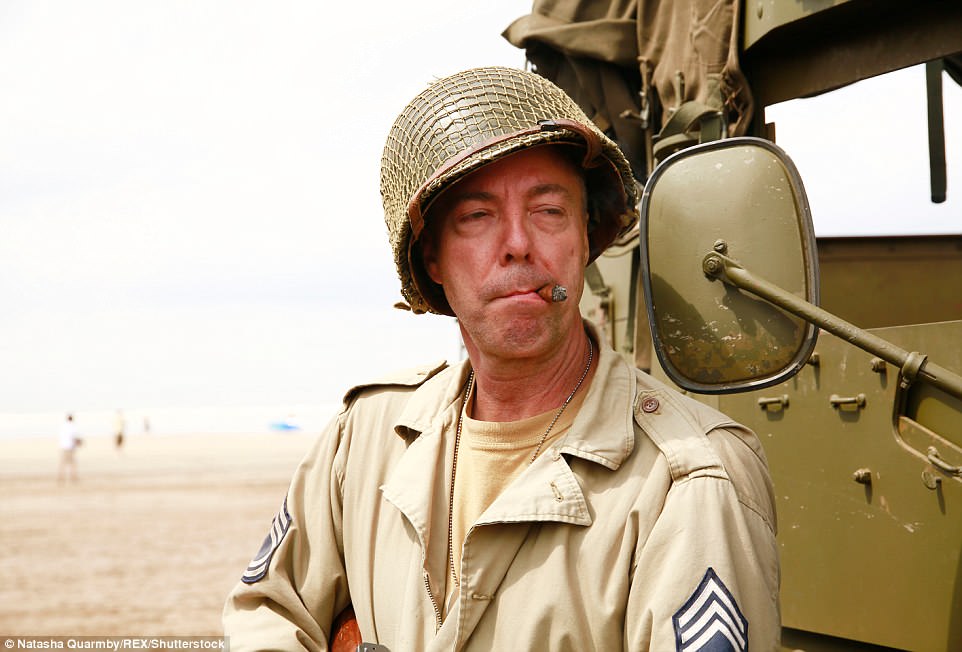 A participant gets into the full GI look complete with cigar as he stands beside his vehicle. In the war, there was accommodation for more than 4000 American troops at the Assault Training Center 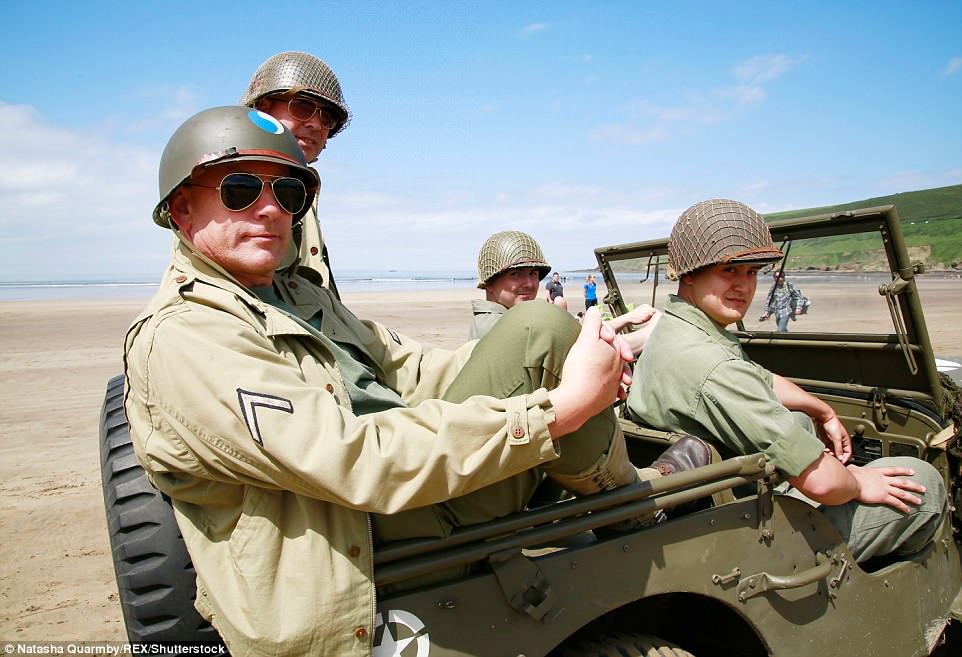 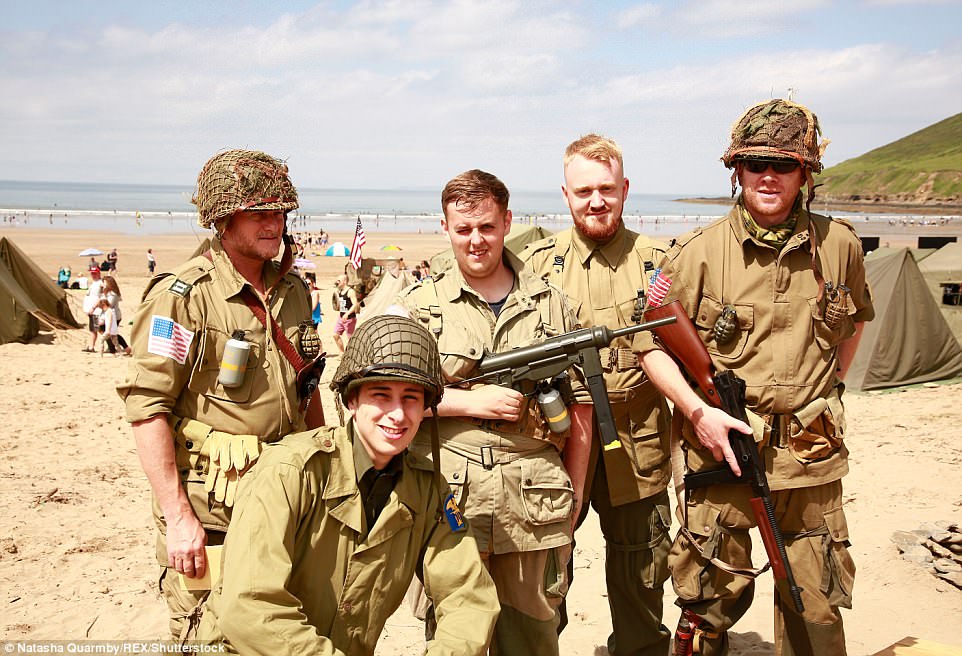 A group of participants dressed in GI uniforms. The beaches of the area were found to have the same sand as Omaha Beach, making them ideal for training for D-Day 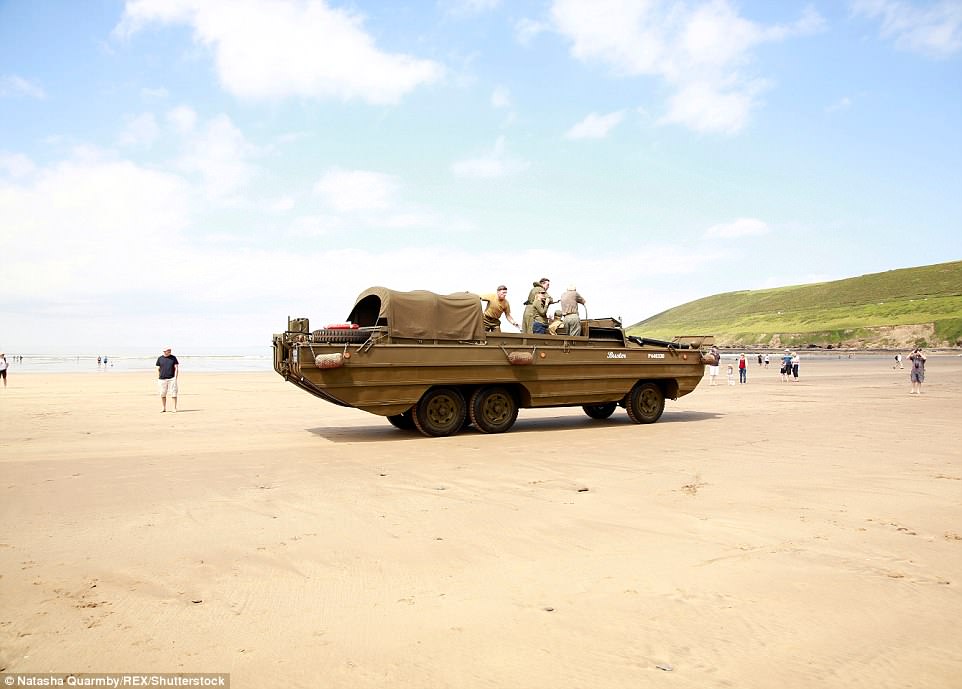 A DUKW amphibious vehicle, also known as  Duck, was a six-wheel-drive amphibious modification of the 2.5 ton CCKW truck used by the U.S. military during World War II 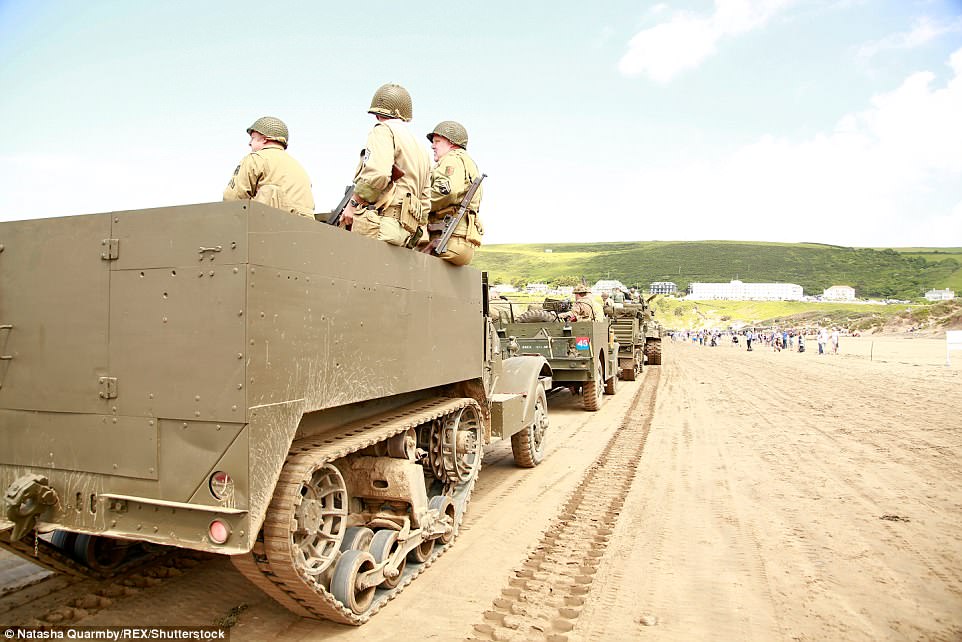 An M3 Half-track, known officially as the Carrier, Personnel Half-track M3. The vehicle was an American armored personnel carrier widely used by the Allies during World War II 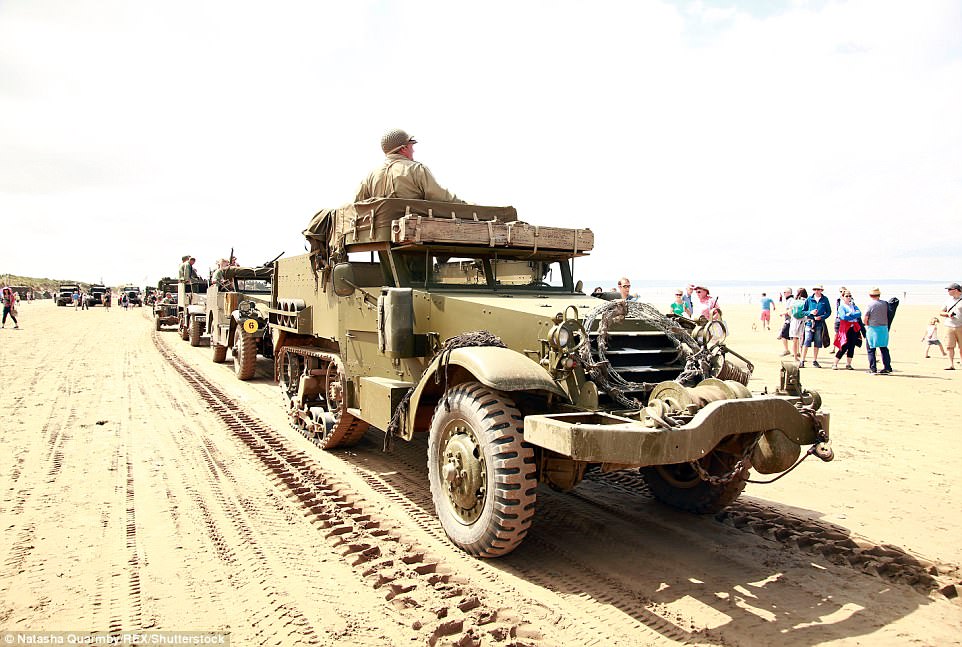 Another M3 Half-track on the beach. The half-tracks were initially extremely unpopular and dubbed ‘Purple Heart Boxes’ in grim reference to the US Army’s decoration for combat wounds, by American troops 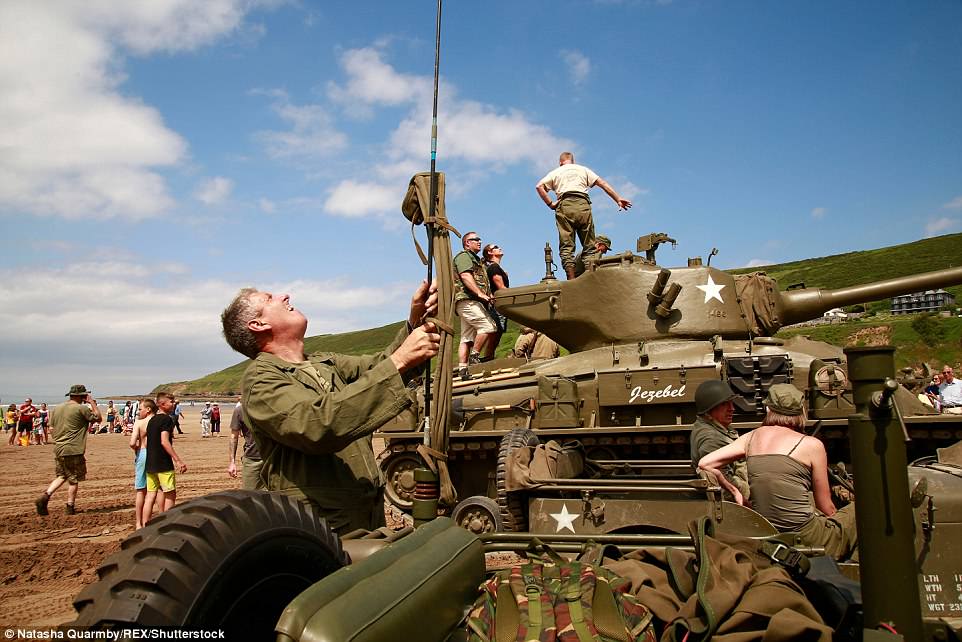 An aerial on a jeep is adjusted while in the background, a Sherman tank is the object of visitors’ attention

As the preparations for the landings began, all the good training ground had been claimed by the British.

Lieutenant Colonel Paul W. Thompson, the officer in charge of training US troops for their assault on the heavily-defended Normandy beaches had no choice but to accept the Atlantic coast near Braunton.

His job was to teach the troops how to neutralise the enemy beach defences and then fight their way inland.

Every part of the training ground was needed for training exercises using live ammunition, explosives, tanks, artillery and air support, according to a history of the area.

The beaches here were ideal for amphibious exercises and the nearby sands were soon found to be identical to those of what became known as Omaha Beach. 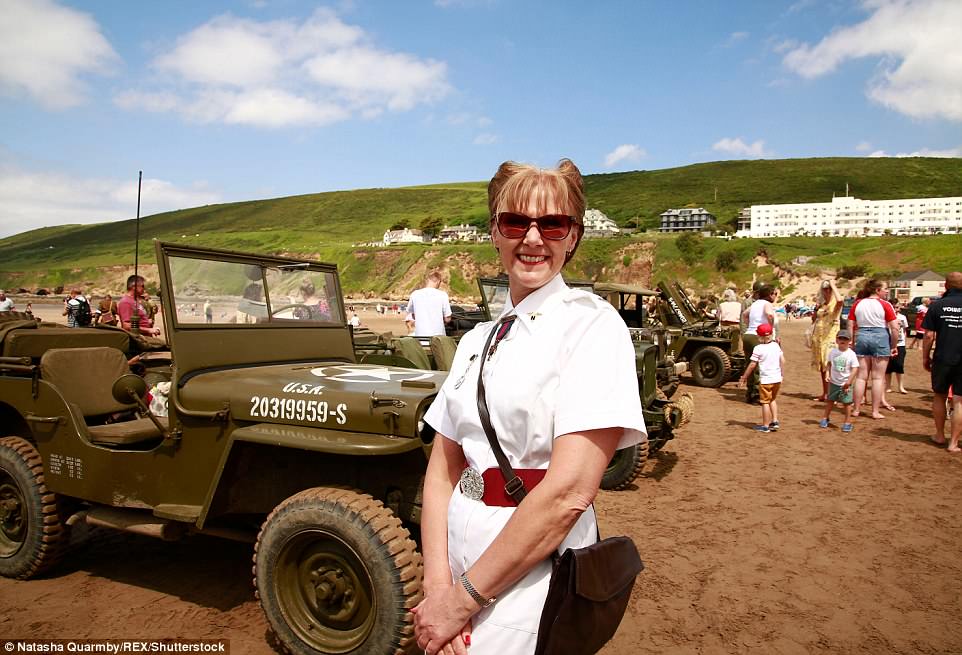 A woman dressed in a nurse’s uniform of the era in front of a US army Jeep. The World War II Jeep became the primary light wheeled vehicle of the United States Military and its WW II Allies 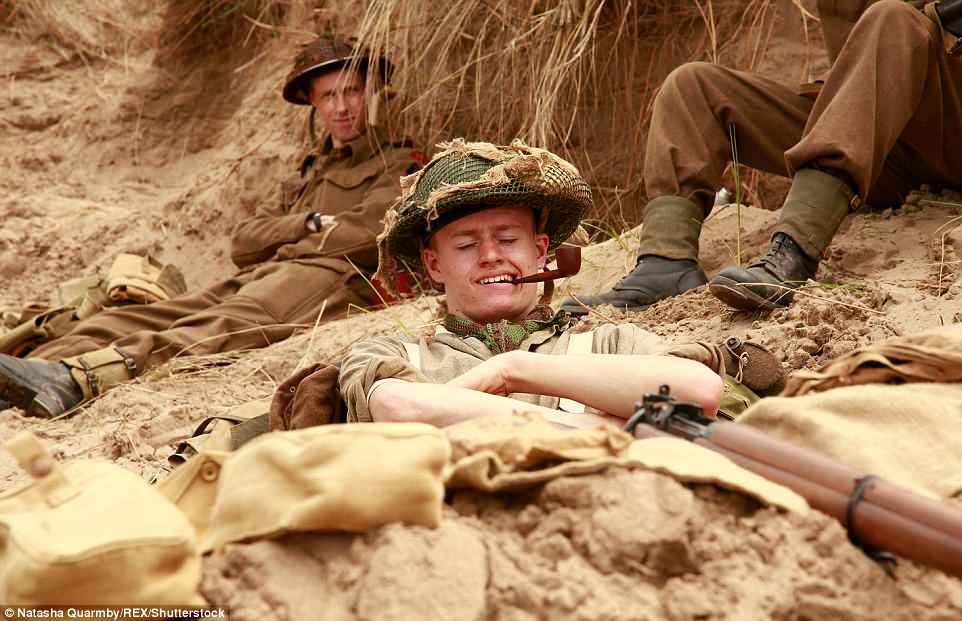 British soldiers also feature in the two day event, though during the war the UK used other training areas to rehearse for the D-Day landings 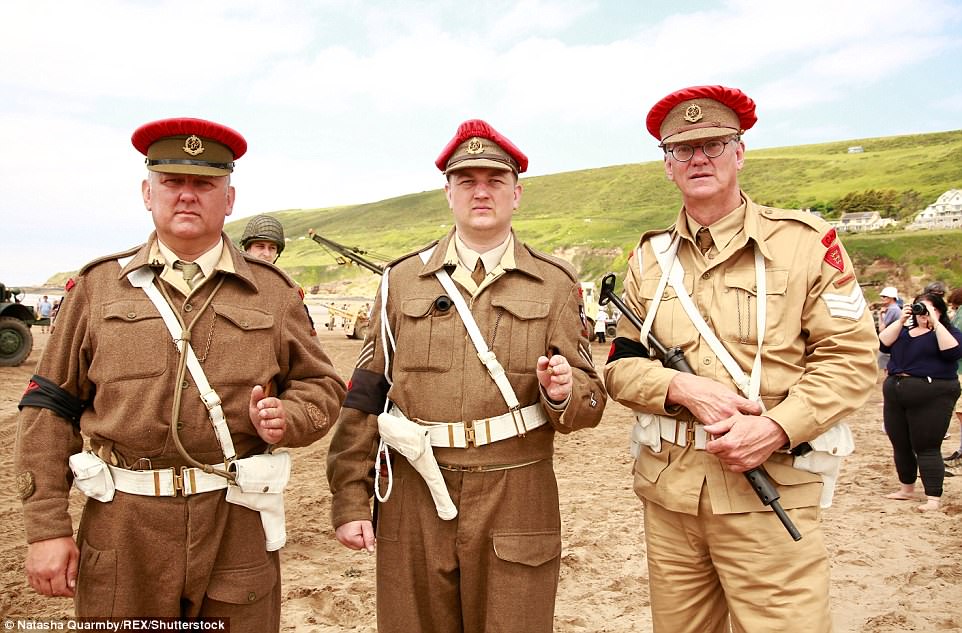 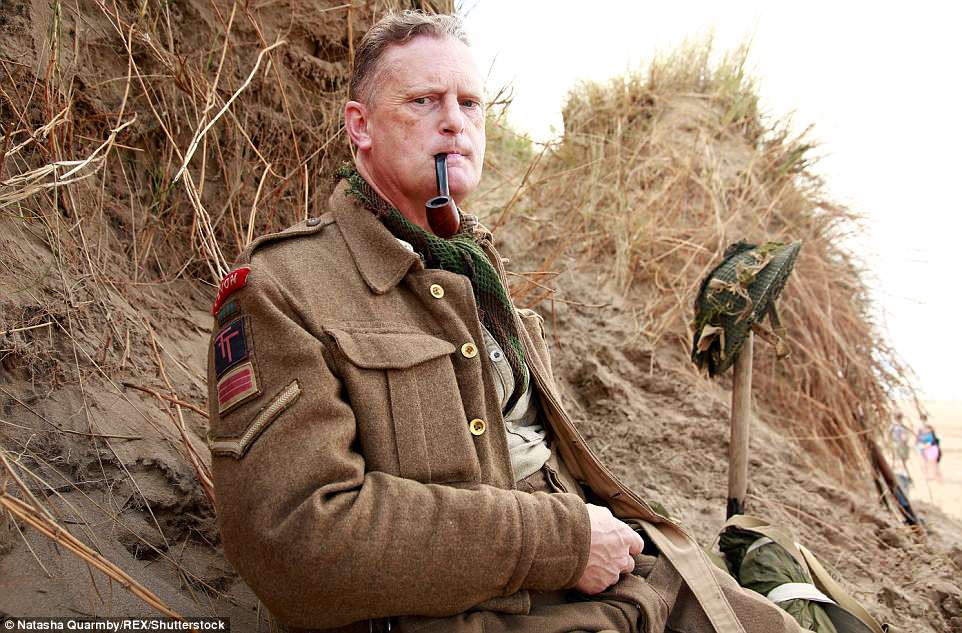 While the GI was chomping on his cigar, this participant came as British Tommy complete with his pipe and helmet 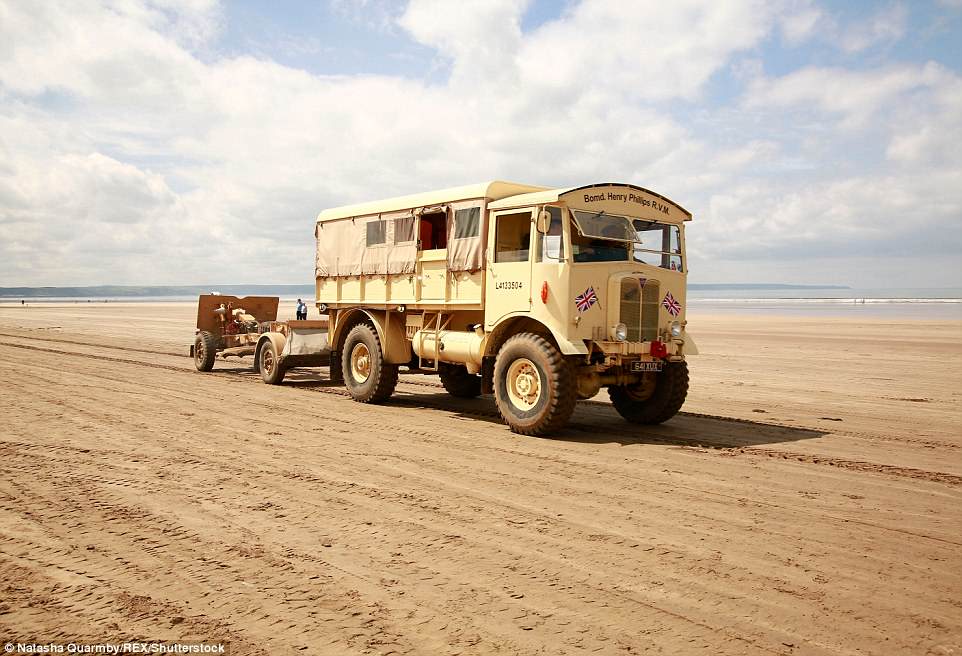 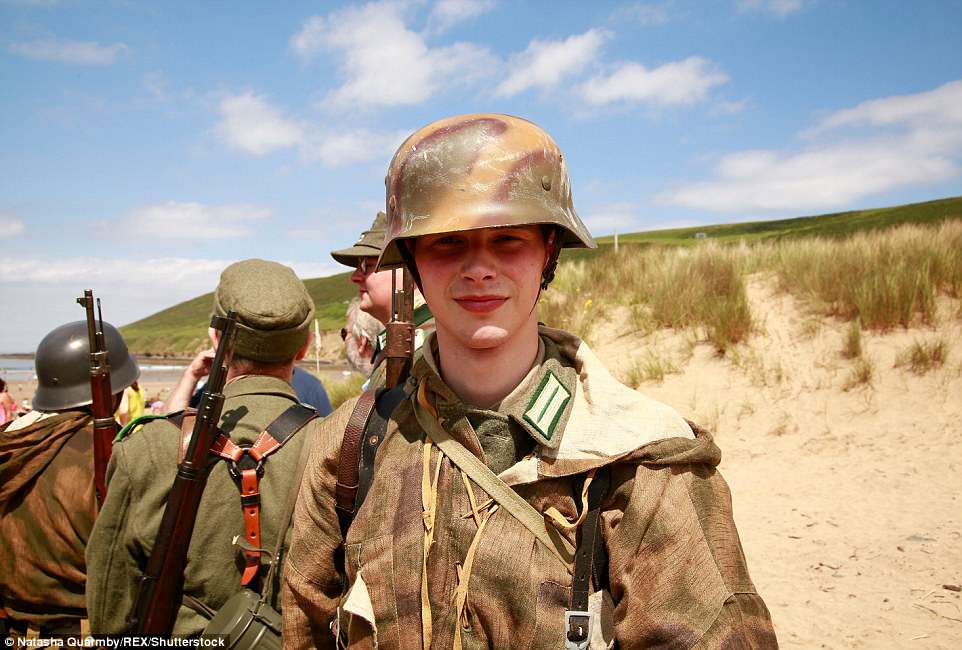 The Germans are also represented, in the shape of the 304 Panzergrenadiers who will ‘battle’ US and British formations the First Wave 44, the 2nd Devons Battalion, 29th Infantry Division 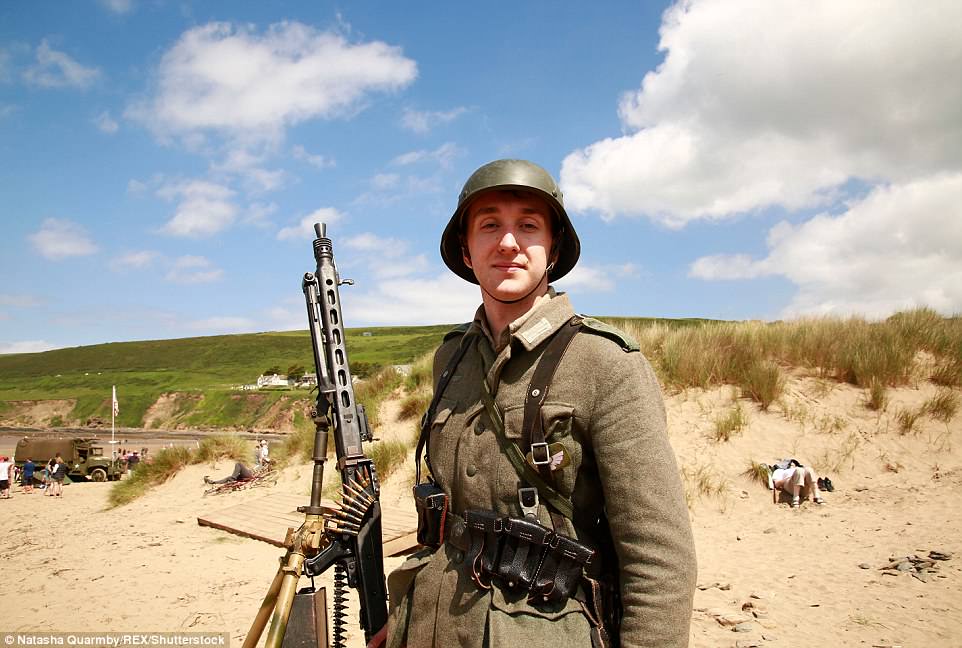 The 304th Panzergrenadier Living History Group was formed in 2013 and became part of the oldest WW2 re-enactment society in the country, the WW2 Living History Association 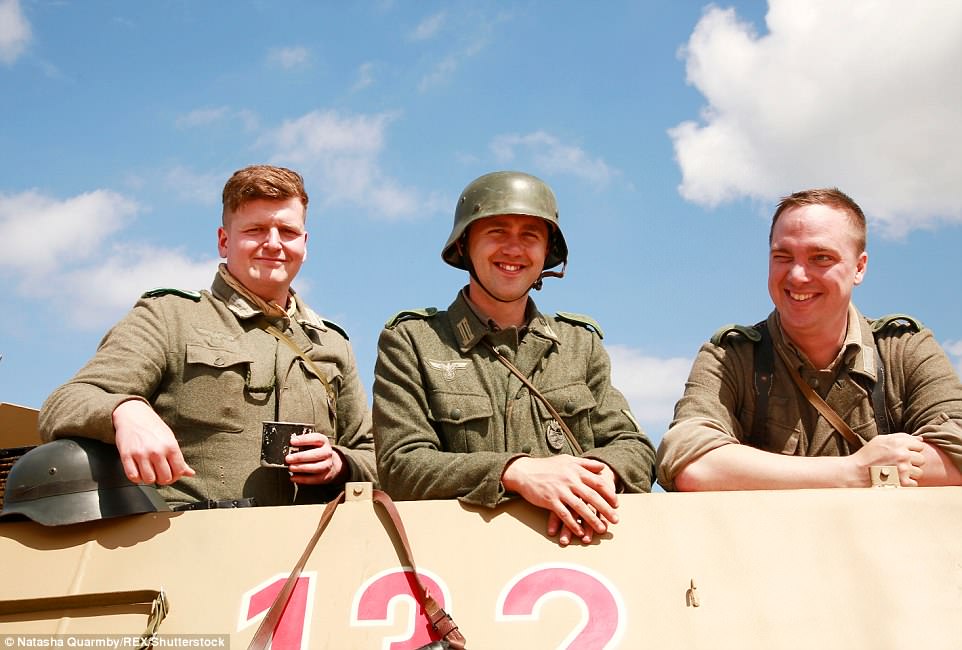 According to its website, the group has’ gained a reputation for authenticity and a true representation of the German Panzer Grenadier’

In order to make the training more realistic, replicas of German pillboxes were built as the first units arrived in North Devon in September 1943.

A permanent camp comprising 505 Nissen huts was built to house 4250 men, who made their boisterous presence felt in the local pubs.

Earlier this year a village’s annual war-time re-enactment has been scrapped because organisers fear it will cause offence.

The event has run for 25 years in the village of Levisham as part of the North Yorkshire Moors Railway’s event called Railway in Wartime, which pulls in tourists in their thousands.

Past years have seen actors dressed as German soldiers patrolling the platform at Levisham station outside the Cafe du Bois.

But this year the railway’s operators have pulled that part of the event out of its schedule citing the Equalities Act and the need to consider ‘diversity and possible offence.’