Hundreds of Buddhist monks rally in Colombo against anti-Muslim riots as calm begins to return to violence-hit areas. 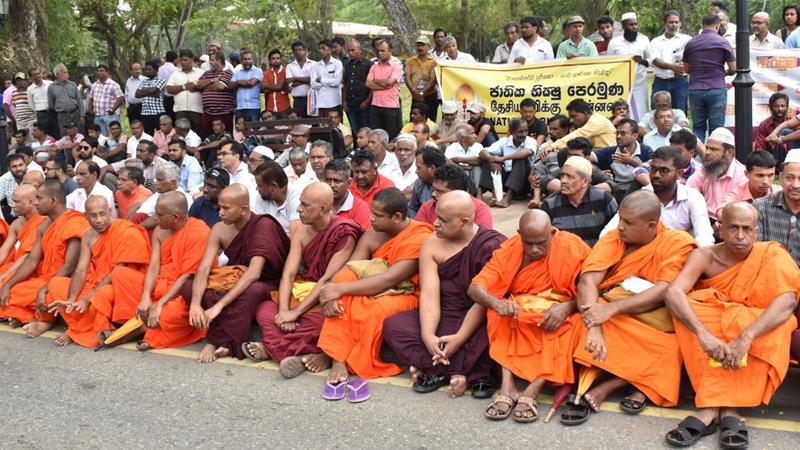 Hundreds of Buddhist monks and activists have rallied in Sri Lanka’s capital against anti-Muslim riots that have killed at least two people and forced the government to declare a nationwide state of emergency.

The National Bhikku Front said on Friday they organised the silent protest against what they called “communal clashes destroying national unity”.

Moderate Buddhist leaders and cricketers have denounced the violence which occurred in and around the central city of Kandy, and several Sri Lankan social media users also posted photos on Twitter of Buddhist monks visiting mosques during Friday prayers to express solidarity.

Meanwhile, calm was beginning to return to violence-hit Muslim neighbourhoods in the Kandy district on Friday, with many shops reopening as army reinforcements largely put an end to Sinhala Buddhist mob attacks that rocked the area.

The riots began on Monday after a man from the Sinhala majority died from injuries sustained during an attack last week by a group of Muslim man.

Tensions escalated when the body of a Muslim man was found in a burned-out building on Tuesday.

Sinhalese mobs set fire to mosques and Muslim-owned businesses, homes and vehicles in Kandy and elsewhere.

The government declared a state of emergency, imposed a curfew and deployed soldiers to back police patrols.

Police said the main instigator of the riots was arrested on Thursday along with 145 others.

He was identified as Amith Weerasinghe, a Sinhala man known for anti-Muslim activism and inflammatory social-media posts.

Army commander Mahesh Senanayake said victims have accused the police and the elite police Special Task Force of just looking on while they were targeted.

“It is saddening if this is true. We are compelled to have more soldiers on the streets and the security has been strengthened by bringing in more reinforcements,” he said.

Internet services, which were blocked across Kandy, were restored on Friday, but access to social media sites such as Facebook remained blocked across Sri Lanka.

The official Tourist Board said it was safe for foreign tourists to visit Kandy, famous for its tea plantations and Buddhist sites.

Ranil Wickremesinghe, Sri Lanka’s prime minister, said on Thursday night that the riots had been a huge blow to Sri Lanka’s efforts to bolster tourism after ending a 27-year-old ethnic civil war between the majority Sinhalese and the minority Tamils.

The war ended in 2009. Since then a religious divide has grown, with the rise of Buddhist nationalist groups who accuse minority Muslims of stealing from Buddhist temples, desecrating them, or forcing people to convert to Islam.

Sinhalese Buddhists make up 75 percent of the country’s 21 million people, and 10 percent are Muslims.

A group of controversial Buddhist monks are facing prosecution for their alleged role in anti-Muslim violence in 2014 that left four people dead.