Colombo: Sri Lanka on Monday declared a countrywide curfew to control the spread of communal violence following some of the worst mob attacks directed at the country's minority Muslim population since the Islamic State group claimed the deadly Easter Sunday bombings. 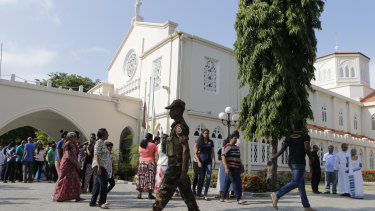 A Sri Lankan government soldier secures the premises of a Catholic church as devotees leave after Sunday Mass at a church in Colombo.Credit:AP

In the weeks since the bombings, which killed more than 250 people, tensions have remained high across the island nation. The government has intermittently blocked social media to avoid the spread of misinformation, and police have declared curfews in some cities after smaller clashes.

But in a sign of growing concern that overnight attacks on Muslim homes and mosques could grow out of control, the government declared a nationwide curfew, from 9pm to 4am.

The Muslim Council of Sri Lanka said attacks had been reported in at least five towns in the North Western province, which has traditionally been home to both Sinhalese, who are largely Buddhist, and Muslims.

Prime Minister Ranil Wickremesinghe, in a statement late on Monday, said security forces had moved in to control the situation in that province. 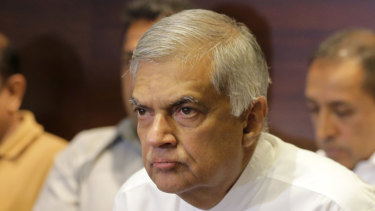 "These groups are trying to create unrest in other areas now," Wickremesinghe said. "The intention of provoking violence at this moment is to create difficulties for the armed forces and the police, to disrupt peaceful civilian life, and to make the country unstable. Therefore the government has decided to declare curfew throughout the country."

President Maithripala Sirisena, already facing mounting pressure for his handing of the security situation, is on a trip abroad. Karu Jayasuriya, speaker of Sri Lanka's parliament, appealed for calm.

The future of Sri Lanka "will be decided by the way people behave in the next few days," Jayasuriya wrote on Twitter. "There is no difference between such racists trying to set our country on fire and the suicide bombers who detonated themselves."

Officials did not provide details of casualties from the clashes so far. Agence France-Presse reported that at least one Muslim man was killed, slashed to death by the mob at his carpentry shop.

Sri Lankan leaders, in their appeal for calm, urged people to avoid a repeat of the 1983 riots, when mobs of Sinhalese, the ethnic majority, angered by attacks by the separatist Tamil Tigers, burned down thousands of Tamil shops and houses, killing anywhere between 400 to 3000 people. The violence of that week sunk the country deeper into a civil war that lasted 26 years.

After some of the initial attacks Sunday afternoon, the government declared a curfew in the North Western province late Sunday night. But police struggled to contain the mobs.

On Monday, some attacks were reported close to the capital, Colombo, with a mosque targeted in the Gampaha district, about 8 km from the country's international airport.

"The attacks are happening in spite of the curfew in place," said M. N. Ameen, president of the Muslim Council. "People are so afraid that they are fleeing their homes and hiding in paddy fields with small children." 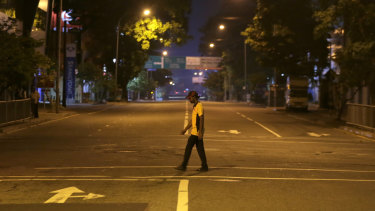 An overnight curfew and social media blackout was put in place in Sri Lanka to avoid further violence.Credit:AP

Early on Monday, the government banned some social media sites as reports circulated that some of the earliest attacks might have been motivated by a threatening Facebook post by a Muslim man.

Rauff Hakeem, a Cabinet minister and leader of the largest Muslim party, said the government "realised things were getting worse" after the attack near the airport, and expanded the curfew to the whole island.

Hakeem said the army had already moved into areas where there were reports of unrest. He also said one of the instigators of deadly communal violence in Kandy in 2018, where Muslim shops and houses were damaged, is "helping spread the unrest" in the North Western province. That violence forced the government to declare a nationwide state of emergency.

Lieutenant General Mahesh Senanayake, commander of the Sri Lankan Army, said forces from the army, the air force and the navy were deployed across the country to help police restore order.

"I say again: We will take stern action to apprehend, arrest and even to fire and use minimum or maximum powers given under emergency," Senanayake said in a statement.

Violence was first reported in the town of Chilaw on Sunday afternoon, about 50 km from Negombo, where one of the worst Easter Sunday bomb attacks killed 102 people at St Sebastian's church.

In the village of Kiniyama, about 32 km west of Chilaw, a mob of hundreds attacked three mosques Sunday night, mosque leader Moulavi Mohammed Siddque said by phone. The village of some 550 people was gripped in fear as reports of violence kept coming from surrounding areas, he said.

"Today we are scared they will come back to attack our houses," he said.