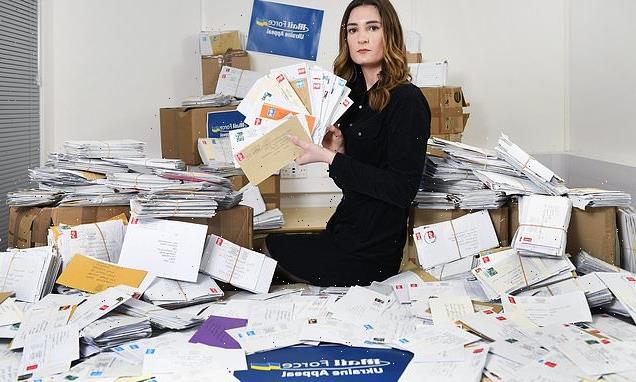 The astounding generosity of Mail readers reduced staff working on our Ukraine Appeal to tears yesterday.

Cheques have arrived by the sackload – and from all across the UK – since the campaign launched last Sunday.

And opening the envelopes yesterday, two Polish-born colleagues in our accounts department were overwhelmed with emotion.

They found many kind-hearted readers sparing whatever they could to help those desperately trying to flee the savagery of Vladimir Putin’s forces.

Sylwia Pazyniak, 26, said: ‘I am so proud of my company and my colleagues and the readers for the help they are giving.

‘We are seeing people dying every day. It’s terrible.’

And Angelika Dawson, 36, added: ‘My family live on the Poland-Ukrainian border and say it is a humanitarian crisis. 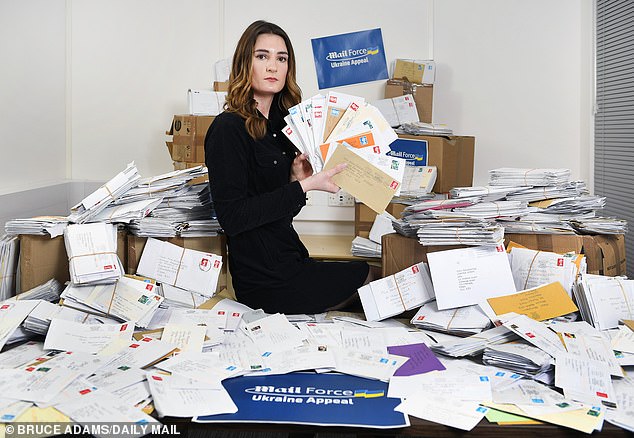 ‘The pictures of the bombing and the Russian soldiers are so frightening. And the thousands of families fleeing their homes is heart-breaking. But people have responded with such generosity and kindness. I have cried a lot in the last week.’

£2,000 in memory of my grandmother from Ukraine

Mail Force’s record-breaking Ukraine Appeal has reached the hearts of many across the UK.

And the Kyral Charitable Trust – founded by Mike and Angela Schumann – is among the generous contributors, donating £2,000.

The trust was set up in 1985 and contributes to about 20 charities a year, among them The Prince’s Trust, British Legion and Salvation Army.

But it was Mr Schumann’s family links to Ukraine that encouraged him to donate Kyral’s largest-ever single contribution to a charity.

Mr Schumann, 80, said: ‘I had a grandmother, Marina Oksiusov, who was born in Mariupol in 1885 and married my grandfather Carl Landsdorff in 1905.’

Former engineer Mr Schumann, who has two daughters and five grandchildren, said: ‘I think this appeal is absolutely the right thing to do and I hope the Mail have had lots of contributions.

‘It is going to cost millions to support the children and women affected by this war.

Mrs Schumann, 72, added: ‘This is a great appeal, thank you to the Daily Mail. You always have great appeals.’

It is less than a week since we launched our appeal to help families caught in the Kremlin’s sickening blitzkrieg of Ukraine.

So much devastation has been wrought that already more than a million Ukrainians have fled to neighbouring countries.

In just six days, the Mail Force Ukraine Appeal has raised an astonishing £3.5million to help them, making it the fastest newspaper fundraiser in world history.

But it is not just money that is flooding in, for the cheques arriving at our nerve centre for donations in Leicester are invariably accompanied by messages to tug at the heartstrings.

Many of our readers are from the older generation, and have written eloquently about their memories of war and the chilling lessons from history.

‘My earliest memories are of my mother waking me and carrying me – still in my nightie – down to the local air raid shelter. Of watching my grandmother praying aloud, clutching her rosary.

‘Her prayers were not just for us but her youngest son who later survived D-Day. I hate the thought of today’s children still having memories of war when they are my age.’

A lot of the donations come from pensioners offering a fiver or tenner and often a note apologising that they cannot send more.

Jennifer Hancock, of Coventry, gave £20 and wrote: ‘I am sorry this is not much, but as an OAP being born in the Second World War, this is all I can afford.’

A £30 cheque from Vivienne Card, of Swindon, was accompanied by the poignant note: ‘This terrible situation reminds me of my dad in World War Two when he was a young boy.

‘My late mother raised funds for aid to Russia when she was young and her brother was on the Russian convoys.

‘I am glad that neither of them are alive to see what has happened to Ukraine and the dreadful aggression of the Russians.

‘It is so sad to see such suffering again.’ Rosemary Barry, of Potters Bar, Hertfordshire, wrote: ‘My partner and I are in our eighties and are horrified at the situation in Ukraine.

‘My late mother helped Hungarian refugees and I lived for two years in the British sector of Berlin in the 1970s. Well done for what the Mail is doing.’

Meanwhile a couple from Nottingham penned a heartfelt letter to the defiant president of Ukraine, Volodymyr Zelensky ‘and the whole of the Ukrainian people’. Maureen and John Ward sent a £25 cheque and wrote: ‘We are in awe of their courage and determination to save their country and the world.

And there was a further £50 from Mr and Mrs Jones, of Holywell, Flintshire, Wales, who said it was ‘a small donation for the brave people of Ukraine suffering at the hands of a deranged cowardly monster, happy to send his own people to war. May he rot in hell.’

We have had cheques from £5 up to several thousand. Michael and Alison Gaskell, of Colden Common, Hampshire, sent £500, and Christopher Boyce from Newport an incredible £1,000.

Some of the letters are written beautifully and others seem hastily scrawled, but all convey the sense of utter despair at the horrific scenes unfolding in a European country in 2022.

It seems incomprehensible to so many that the appalling refugee crises of the Second World War in Europe and the Far East could happen again.

A man named Mr Alain, of Guernsey, who with his wife donated £100, recalled how his father fought in Burma with the Chindits – British empire troops who carried out guerrilla-style operations – and wrote: ‘To the Ukrainian people in their fight against the Russians.

‘In 1940, my mother evacuated with me, aged five months, my brother, 19 months, and grandmother. My father fought in the Chindits.’

Alan Jones, of Horley, Surrey, who with his wife donated £200, sent a message supporting the Ukrainian people which read: ‘May they succeed in saving their country.’

On Wednesday, the Duchess of Cornwall gave a ‘substantial’ amount to the Mail’s appeal after meeting British-based Ukrainians. And at the request of Lord and Lady Rothermere, the Mail’s parent company DMGT has donated £500,000.