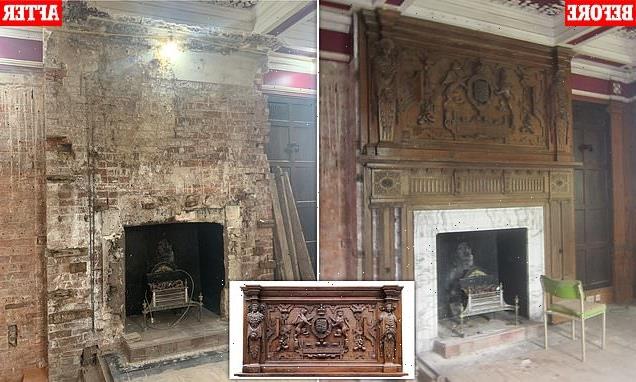 A bungling stately home caretaker was sacked after he accidentally gave away a historical Tudor artefact worth £5million.

Brian Wilson was fired from his job at a Grade II listed Seighford Hall in Stafford, Staffordshire, after bosses found he had let car salesman Andrew Potter walk off with the 460-year-old antique.

Mr Potter took a nine feet wide oak overmantel – an ornamental structure above a mantelpiece – from the 16th century mansion and it was later valued as being worth a staggering £5million by auctioneers.

When Mr Potter tried to sell the artefact the local council took out an injuction to stop him, and although this was later dropped, he has since been unable to sell it.

He is currently in the process of trying to find a buyer in the Middle East, according to a local auction house. 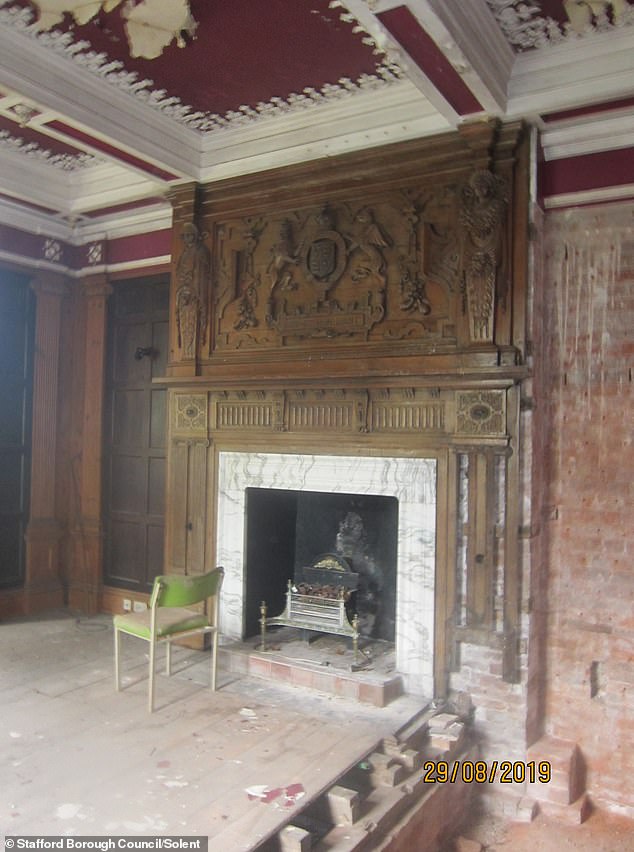 Brian Wilson was sacked after he allowed Andrew Wilson to take this nine-foot wide oak overmantel from Seighford Hall, in Stafford. An overmatnel is an ornamental structure above  a mantelpiece

Claiming unfair dismissal from his job, Mr Wilson told an employment tribunal the wooden item was ‘rotten’, had been set aside to be burned and that giving it away would save him the time of disposing of it.

The hearing was told the building was constructed in the 16th Century and had been derelict for about 20 years after being used as a nursing home for many years.

The hall has since been bought by a private firm which plans to turn the mansion into a luxury hotel.

Mr Wilson lived in a caravan on the grounds ‘to deal with any security and maintenance issues’, the tribunal was told. 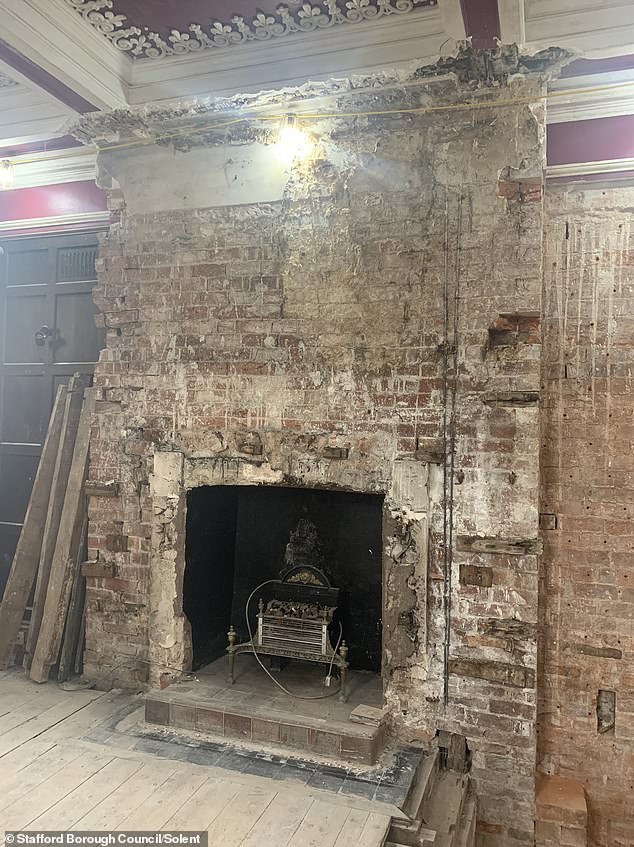 When a building surveyor went to look around the hall, Mr Wilson told him the overmantel had been stolen by thieves

During his inspection, Mr Wilson told Mr Lever there had been a break in the previous night and items had been taken including a tractor, an oak overmantel and fireplaces.

He told Mr Lever he had reported this to the police, but was unable to give a crime reference number.

The tribunal heard Mr Lever was ‘suspicious’ as he could not see any signs of forced entry and was surprised Mr Wilson did not hear people taking the heavy items away.

Social media messages were shown to the tribunal, with one person referring to ‘dodgy dealings’ at the Hall and being ‘informed by very reliable sources that most of the interior and exterior fittings, e.g. fire places, balustrades and fountains are being offered for sale’. 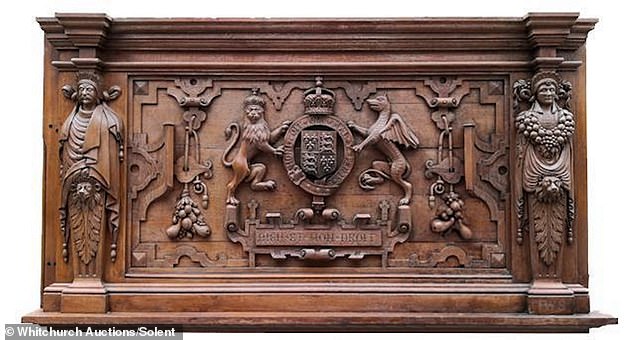 Mr Smith and Mr Lever said police carried out an unannounced visit in August or September 2020 to check the Hall was safe and secure.

The police confirmed there was no crime reference number about a break in at the Hall so Mr Smith made a formal report of theft.

The tribunal heard that Mr Wilson told police that in April 2020 businessman Mr Potter visited the Hall as a prospective buyer of the property.

He claimed that while there Mr Potter asked if he could rummage through the ‘fire pile’ and that Mr Potter took away a ‘decorative piece of wood… it was rotten. Riddled with wood worm and dry rot… I let him have it, as far as I was concerned it was less rubbish for me to get rid of’.

The tribunal heard the item removed by Mr Potter was the overmantel which was the subject of an auction appraisal, described as being in ‘excellent condition for its 400+ years’ with ‘minimal damage.’ It was valued at up to £5million.

The tribunal heard that following a tip off Mr Smith found a fireplace that had been taken from the Hall at a local antiques shop.

Ian Kettlewell of the shop, Windmill Antiques in Stafford, informed them he had been shown around the Hall on in June 2020 by Mr Wilson and had agreed to purchase two fireplaces for £450.

The tribunal also heard a local car dealer told Mr Lever he had purchased a tractor from Mr Wilson in May 2020 for £1,000. 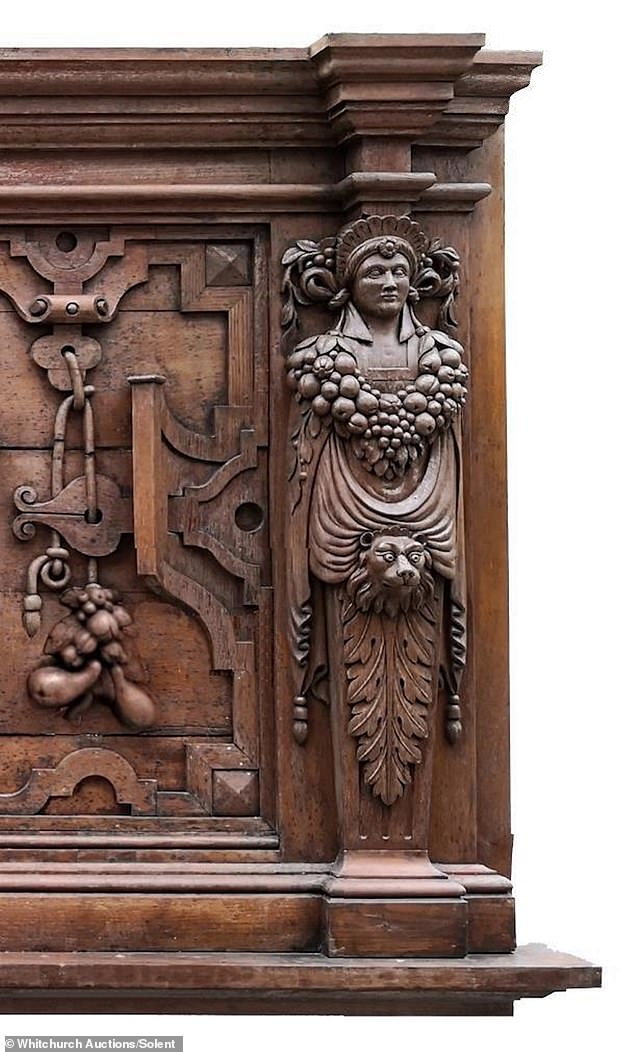 The new owner tried to sell the oak overmantel, but was stopped when the local council took out an injunction

In October 2020 managing director Thomas Butler invited Mr Wilson to an investigation meeting concerning the sale of the fireplaces and the tractor without permission, as well as ‘handing over a historic artefact’ without authorisation.

Mr Wilson did not attend the meeting and the tribunal heard he did not receive any letters as he had moved home.

Despite not having Mr Wilson’s input, Mr Thomas sacked him in November 2020 for gross misconduct.

The tribunal heard Mr Wilson did not hear about this until February the following year.

Claiming unfair dismissal, Mr Wilson told the tribunal he had permission to scrap the tractor as it was ‘absolutely rotten’ and denied selling it or receiving any money for it. 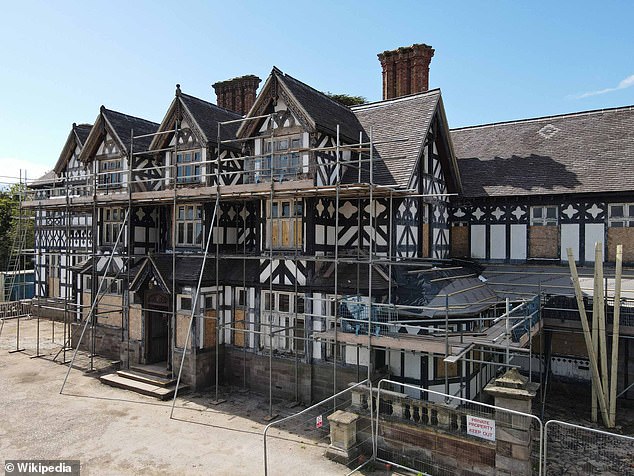 He denied the fireplaces being removed, said they were still in place and the evidence against him was ‘all fabricated’.

Regarding the overmantel, he claimed it was removed due to a fungal infection and it was placed on the ‘fire pile’

Employment Judge Kate Hindmarch ruled he was unfairly dismissed as he had not been made aware of the decision to fire him.

She awarded him £4,065.82 in unlawful deduction from wages and untaken holiday pay, but ruled he was not entitled to any additional compensation for his sacking.

She concluded: ‘I have found [Mr Wilson’s] actions were without permission and that he was not credible in his explanations. His behaviour was blameworthy, and I find the basic award should be nil.’

Since Mr Potter acquired the overmantel he has struggled to sell it. He first brought it to his friend Michael Jones, a partner at Whitchurch Auctions in Shropshire.

Mr Jones, 65, said his first impression of the piece was that it was ‘absolutely sensational’. 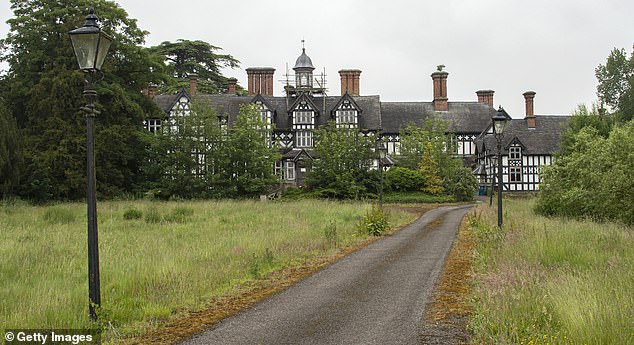 ‘He had gone to Seighford with a partner because he was interested in buying it. When he left he saw they were chucking all these bits of rotten wood on a bonfire they were just about to cover with petrol and set alight.

‘On the top was this overmantel and he said ‘can I have that?’ He didn’t do anything with it for about a year and then decided he was going to cut it up to make headboards from it for his three kids.

‘Just as he was about to cut it up in front of his garage a gentleman walked past and said ‘what are you doing?’. This man was an expert in Elizabethan history and told him it could be worth a lot.

‘We tried to sell it and even had an offer of £1.9million but the police and the council came and told us to stop.’

Stafford Borough Council took legal action against Mr Potter, claiming there had been no listed building consent granted for the removal of the mantel, and was granted a temporary injunction under the Dealing in Cultural Objects (offences) Act.

But it then dropped the case in December last year and Mr Potter has since been looking for a buyer abroad.