The arrogant EU elite is playing with fire: STEPHEN GLOVER says Italy’s pain could be Britain’s gain as Brussels struggles to contain an even bigger problem than Brexit

British Eurosceptics sometimes overestimate the likelihood of the EU and the euro falling apart under the weight of their in-built contradictions.

Many were convinced a few years ago that the huge debt problems of Greece would force it to crash out of the euro. In the event, the country has so far remained part of the single currency, though at a terrible cost to its economy.

But dramatic developments in Italy over the past 48 hours entitle one to say that the trouble brewing in that country is likely to dwarf anything that has happened in Greece.

This is a full-blown crisis in the Eurozone’s third largest economy, nearly ten times the size of Greece’s. 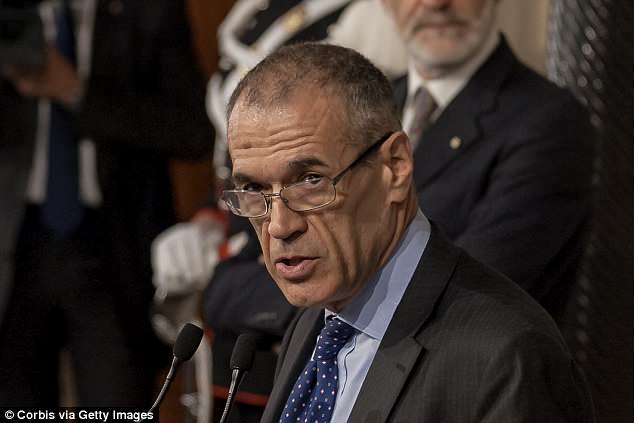 President Sergio Mattarella has asked Carlo Cottarelli (pictured), a pro-EU stooge who has worked for the International Monetary Fund, to lead an interim administration

What is taking place is a stand-off between the increasingly unpopular Italian Europhile class represented by President Sergio Mattarella on the one hand and, on the other, two populist parties, both critical of the EU, which together won half the vote in March’s general election.

Mattarella has vetoed the appointment of Paolo Savona, a distinguished veteran Eurosceptic put forward by the anti-Establishment Left-leaning Five Star Movement and the hard-Right League as their finance minister in a prospective populist coalition.

As a result, both parties have given up their attempt to form a government, and are calling for President Mattarella’s impeachment. Meanwhile Mattarella has asked Carlo Cottarelli, a pro-EU stooge who has worked for the International Monetary Fund, to lead an interim administration.

It is certain this won’t last more than a few months since Cottarelli only enjoys the support of a minority in parliament. There will soon be another election in which, it can be confidently predicted, Five Star and the League will do even better than they did in March.

The truth is that, by rejecting the Eurosceptic Savona in such a high-handed way, Mattarella (who has no democratic mandate) has behaved as the Europhile ruling class usually does in most EU countries, including our own. The democratically expressed view of the electorate is ignored. 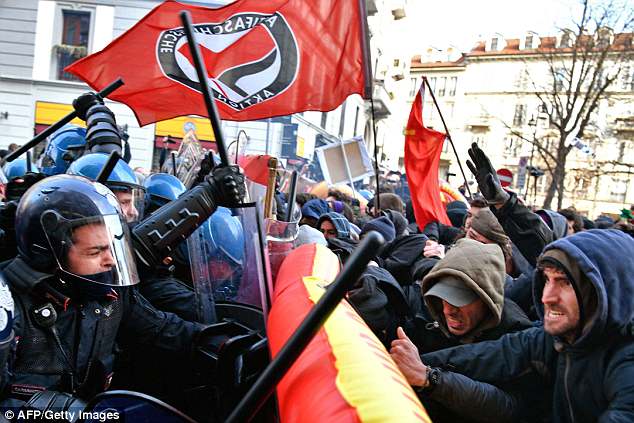 Whether the insufferable Jean-Claude Juncker or Germany’s Angela Merkel actually picked up the telephone to tell Mattarella what to do we don’t yet know. But both Brussels and Berlin have swiftly welcomed Mattarella’s actions. The Italian President was doing what was expected of him.

Paolo Savona is a hate figure in Europhile circles because of his intelligent appraisal of the disastrous effect membership of the euro has had on Italy. A euro exchange rate that suits Berlin is throttling the sclerotic Italian economy, which has scarcely grown since the country joined the single currency 19 years ago.

Savona has even blamed Germany for Italy’s plight. He has written of the ‘German cage’ and criticised Berlin in forthright (and to my mind accurate) terms: ‘Germany didn’t change its idea on its role in Europe after the end of Nazism, even if it abandoned the idea of imposing itself militarily.’

In fact, there is nothing to suggest that the 81-year-old Savona would have taken Italy out of the euro had he been allowed to assume his position as finance minister. But he would undoubtedly have been less friendly to the EU than his pliant, Brussels-approved predecessors.

More from Stephen Glover for the Daily Mail…

Mattarella’s behaviour is almost certain to increase suspicion of the EU in Italy. Many Italians believe Brussels has ignored its serious migrant problem, and there is little doubt that the plan of the Five Star/League alliance to deport 500,000 illegal immigrants carries widespread popularity.

Five Star and the League certainly have some wacky policies – not least lower tax rates combined with a grant of about £690 a month for those deemed at risk of poverty. The bill could run into billions, and boost Italy’s already stratospheric national debt.

But Mattarella’s EU-backed policy of undermining the two populist parties seems certain to backfire in a country where, according to a poll last week, 61 per cent of Italians believe their voice isn’t being heard by Brussels.

In the short term, there is very likely to be mounting political and economic chaos in Italy, which is sad for that wonderful country. In the longer term, though, the chances of Italy escaping the stranglehold of the euro must have improved.

Meanwhile, Italy’s pain could be Britain’s gain as Brussels struggles to contain an even bigger problem than Brexit – a problem which really does threaten the disintegration of Jean-Claude Juncker’s tottering, and increasingly unloved, empire.