Boris Johnson and Jeremy Corbyn travelled to Salford to take part in last night’s leadership debate in front of a studio audience of some 200 people, and millions of television viewers, in very different political circumstances.

The Labour leader unquestionably arrived as the underdog. His personal ratings are lower than for any other political leader in living memory.

His party may have gained a few points at the expense of the Lib Dems in recent weeks, but it has so far failed to make any inroads against the Tories.

Moreover, he hasn’t enjoyed the most inspired of campaigns while trying to bamboozle the electorate with increasingly far-fetched financial inducements. 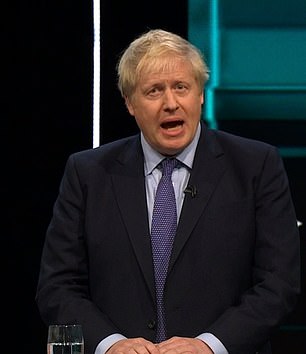 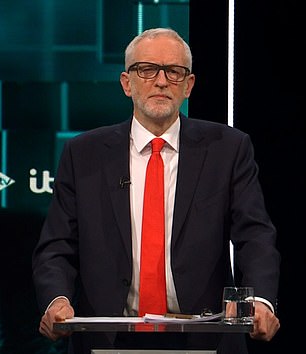 In tonight’s debate, Boris Johnson insisted he is determined to ‘get Brexit done’. Jeremy Corbyn said he was offering ‘real change’ and would deliver ‘for the many’

He can also appear unappealingly testy when put under pressure, as he showed in a recent interview on Channel 4 News.

But Boris, despite being the favoured contender, will have caused advisers some palpitations during intense rehearsals for the ITV shoot-out. He is sometimes vague and waffly when pressed on facts and, although he is far cleverer than Mr Corbyn, his mind does not always operate swiftly when his back is against the wall.

His aides must have also hoped that the Prime Minister wouldn’t come across as an entitled and arrogant Old Etonian and former Oxford University ‘Bullingdon boy’ patronising the older, and in many ways less gifted, Labour leader.

Many Conservative supporters will have had their hearts in the mouths as the debate kicked off at 8pm yesterday. Would Boris somehow contrive to undermine the Tories’ advantage?

In the event, the gladiatorial contest probably came out much as the leaders’ respective sidekicks would have expected. Of course, each side will claim a moral victory as is inevitably the case on such occasions, with spin doctors offering frantic and wildly partisan briefings at the end of play.

I’d say Mr Johnson performed at least as well as his cheerleaders could have hoped, and avoided the gaffes some of them may have feared. He was at times eloquent, always energetic, and exuded the optimism which is undoubtedly part of his electoral appeal.

He also went out of his way to be polite to his opposite number and, when the occasion arose, bounded to shake his hand with more exuberance and good grace than, for his part, Mr Corbyn showed. Nor was he often at a loss for a cogent answer. 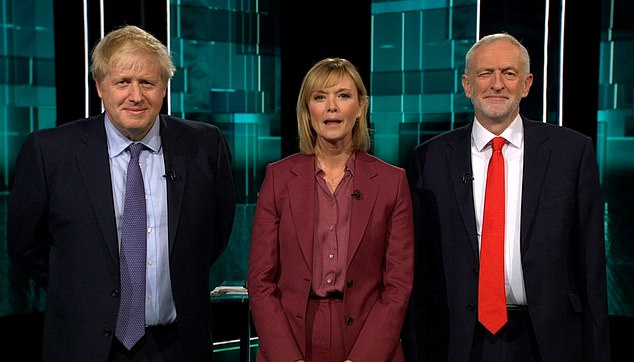 With just over three weeks to go until the nation goes to the ballot boxes, the two leaders drew battle lines in the ITV special as they set out their pitch to voters

Meanwhile, although the Labour leader hardly made a hash of things, whether his, and his party’s, standing in the country will have improved may be seriously doubted. He was often his curmudgeonly, slightly schoolmasterly, tired-looking and sometimes evasive self.

On Brexit, which dominated the first part of the proceedings — and to which subject Mr Johnson returned whenever he could — the PM was admirably single-minded about his ‘oven-ready’ deal which ‘delivers everything we wanted’.

By contrast, although he was pressed several times, Mr Corbyn refused to say whether he would campaign for or against the deal with the EU, which he claims he could negotiate in a matter of only three months.

So three-and-a-half years after the EU referendum, the country still doesn’t know what the leader of the Opposition thinks about Brexit. He had the brass neck repeatedly to use the word ‘clear’ to describe a policy that is about as murky as it could be — on one occasion attracting laughter.

All he could do to distract attention from his confusion was to repeat the lie that the NHS was up for sale to the U.S. in a future trade deal, which Mr Johnson emphatically, and I thought convincingly, denied. Mr Corbyn even asserted that such a deal would take seven years to complete. Where did he pluck that figure from?

Of course, the Labour leader made his usual comments about a divided society, and ‘the tax cuts that have been handed to the super rich’ — all of which will resonate well in some quarters.

But on the potentially delicate subject of the NHS — over which the Tories have, after all, presided for more than nine years — I don’t think Mr Corbyn was able to establish the advantage that he would have hoped.

He was also characteristically slippery about any possible future parliamentary pact that Labour might make with the Scottish Nationalists over a second independence referendum, saying only that it was not a matter that he would address ‘in the early years’ of a Labour government.

Needless to say, there were many subjects that did not come up in the relatively short time available — and which might have exposed Mr Corbyn’s dangerously revolutionary ideas.

There was no mention of Nato, or Britain’s unilateral nuclear deterrent, which Mr Corbyn seems ready to negotiate away.

Anti-Semitism — over which Labour is desperately vulnerable — received only a glancing reference, as did immigration, where Labour appears keen to adopt an open-door policy without admitting as much.

But on such policies that did come up, Boris Johnson was generally the master of his brief. He was funny, too, and got more laughs than Corbyn.

He quipped that the Labour leader had not just a money tree but a ‘money forest’. And under the eye of the always steely and glacially competent moderator, Julie Etchingham, he suggested that he might put a jar of damson jam under Mr Corbyn’s Christmas tree. 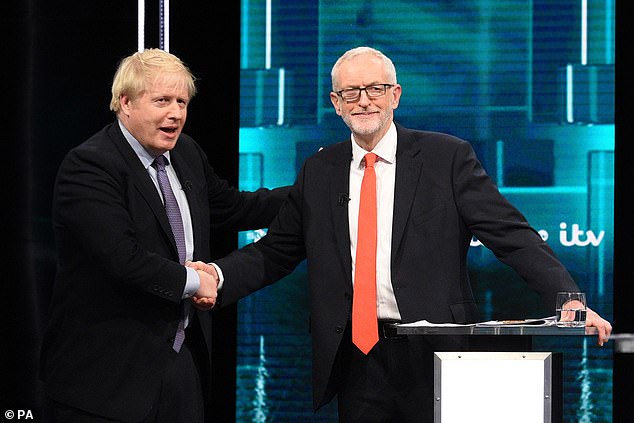 Despite their increasingly bitter rowing, at one point Mr Johnson and Mr Corbyn paused to shake hands after being entreated to raise the tone of politics

For all the media razzmatazz surrounding these events, I don’t suppose that what happened last night in Salford will affect the outcome of the election in any very significant way. And that will be a relief to both parties. Survival is, above all other considerations, the main object of the exercise.

After Theresa May had ignominiously ducked a debate during the 2017 election campaign, Boris knew that he had to show up on this occasion. He and his supporters will be relieved that, far from blotting his copy-book, he put in a more than solid performance.

As for Mr Corbyn, he failed to change the political weather. Such a prize has been attained only once before in a similar debate by Nick Clegg, the then Lib Dem leader, during the 2010 general election campaign.

Now both men will prepare themselves for a rematch under the auspices of the BBC on December 6, only six days before election day. The stakes will be even higher than they were last night. The two leaders will want to exchange the knock-out blows that neither of them succeeded in landing in Salford.

But, on this showing, I believe that Boris Johnson will have advanced his cause in the public mind as someone who can deliver Brexit — an issue which continues to cloud Mr Corbyn’s mind — and govern as a prime minister who is competent, human and down to earth.

With nearly three weeks to go, much can still go wrong. Perhaps it will. But after the PM’s bullish performance last night, I confess I am more optimistic about the outcome than I have so far been.