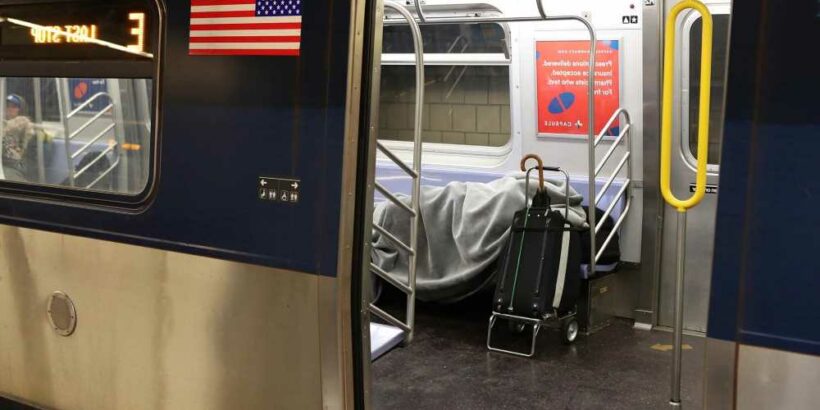 Top subway honcho: Homeless should not live within subway system

New York City Transit President Sarah Feinberg minced no words Sunday in slamming the homeless advocates who “have sort of decided that the subway is a reasonable place for folks to live.”

“The answer should never be that someone lives on a bench or someone lives in a tunnel,” she told WABC radio. Darn right. And: “It boggles the mind that there are groups out there that have decided that this is an acceptable solution for these folks.”

Worse, these groups “have devoted their time and their resources and their advocacy skills” to enabling such abuse of public spaces.

Yet Mayor Bill de Blasio, for his homelessness czar, tapped one of these advocates: Steven Banks, who has presided over a vast increase in city spending on the homeless and a simultaneous rise in the street-homeless problem.

Indeed, the advocates have city politicians so afraid to adopt a “tough love” approach to the homeless that Gov. Andrew Cuomo had to order late-night subway closures in the name of “cleaning,” just to stop these tortured souls from utterly taking over the system. But the closures are about to end — what then?

One good idea is to have places to bring the homeless besides a hospital or jail. But de Blasio put that initiative under the ThriveNYC umbrella — so it’s failed.

As The City reports, City Hall spent over $100 million to build two “diversion centers” for the mentally ill. But one hasn’t opened, and the other is barely used.

That’s right: Four years after $52 million went to rehab a 14,000-square-foot former IRS office in a graffiti-covered Bronx building into one center, it sits empty. Another $51 million actually opened the operation in East Harlem … this past November. It’s served a scant 45 clients since.

In short, conventional progressive thinking fails miserably at soft as well as tough love. Pray that the next mayor breaks from this foolishness.