Carson, Los Angeles: When Otilia Marquez drives through Carson with her mum and little sister, the air stinks so much that one of them always jokes: “Who farted? Who didn’t take a shower? Put your shoes back on!”

One afternoon, Marquez’s sister whipped out a can of Febreze air freshener, stuck it out the open car window and gave a spray. At home, Marquez has been burning black cherry-scented candles, trying in vain to beat back the stench. 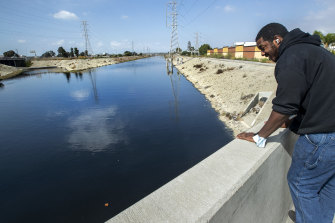 Richard Mootry, a local worker, looks out at the Dominguez Channel, the source of a foul odour in Carson, California.Credit:Getty Images

“It’s like we’re gonna be known as that stinky city now, and I don’t want that,” said Marquez, 27, who has lived in Carson her entire life.

For nearly two weeks, an overpowering foul smell — likened to rotten eggs, a dead body and faeces — has been wafting from the Dominguez Channel, which spills into Los Angeles Harbour.

The stink has been the butt of plenty of online jokes: “If you can’t smell the air in Carson, you DEFINITELY have COVID,” one Twitter user quipped.

Outside City Hall, a protester this week held a sign reading: “What the funk?”

Even as residents such as Marquez, who has had headaches and burning eyes, try to keep a sense of humour, they are outraged by the odour and the slow response by government officials.

Los Angeles County officials say the smell is caused by hydrogen sulfide – a flammable, colourless gas known as “sewer gas” – coming from decaying vegetation in the channel that has built up because of the drought.

It took nearly two weeks for county crews to begin spraying with a biodegradable odour neutraliser called Epoleon that will convert the hydrogen sulfide to a salt.

The spraying began on Friday, and workers will soon pump oxygen into the water, since hydrogen sulfide is produced in unoxygenated environments. 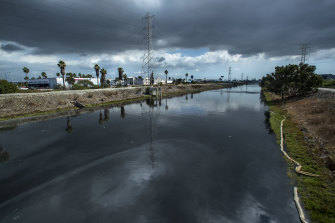 Health officials are recommending Carson residents keep their doors and windows closed as authorities work to address the odour emanating from the Dominguez Channel. Credit:Getty Images

County and city officials say they had to wait for investigators and scientists to determine the cause of the odour before they could act. One petroleum industry investigator was overcome by the smell and became lightheaded.

The Carson City Council did not declare the smell a public nuisance until October 11 – eight days after it was officially reported.

The noxious fumes can cause headaches and nausea, but officials say the levels in the air are too low to cause long-term health effects.

Earlier this week, county officials announced that residents can be reimbursed for air purifiers and hotels.

The city followed with its own reimbursement program, which will also include medical expenses and will come out of $US100,000 ($135,000) in emergency funds.

But people have already been suffering from the odour, and it could take weeks to get the reimbursements.

Birds could also be at risk because they eat bugs that may have ingested toxic substances.

“We are behind, and I think as a city government we should just admit our mistake,” Carson mayor Jim Dear said during a special meeting on Thursday. “We should have acted immediately.”

Hydrogen sulfide is produced by decaying organic matter such as dead animals or dying plants.

Humans can detect the smell at very low levels, which helps us notice when food is rotten, said Barbara Belmont, a chemistry lecturer at Cal State Dominguez Hills in Carson.

Belmont compared the Dominguez Channel to a human intestine and the hydrogen sulfide to flatulence.

“Normally, when things in the channel are flowing properly, and there’s plenty of oxygen, and the water is moving, the good bacteria are thriving,” she said. “Most of the time, there’s good bacteria, and the emissions are generally odourless.”

But now, bacteria that thrive without oxygen are flourishing in the slower-flowing water, and their hydrogen sulfide emissions stink, as when people pass smelly gas after eating something foul, she said.

The levels of hydrogen sulfide measured in the area are “well below what’s actually hazardous and what would lead to an emergency where everyone needs to get out,” Dr Muntu Davis, the county’s health officer, said in an interview.

“How can anyone say it’s safe?” asked Stephanie De La Rosa, 52, who lives about 800 metres from the Dominguez Channel. “People are getting sick, and it’s difficult to breathe.”

“It’s already affecting me now,” Samantha De La Rosa said. “How will I know it won’t affect my baby?”