Stocks fell on Monday at the start of a holiday-shortened week of trading, with investors considering renewed virus-related restrictions overseas and prospects that a significant social policy bill may be scuttled.

The S&P 500, Dow Nasdaq each dropped by nearly 2% during intraday trading. Treasury yields fell as investors piled into safe haven assets, and the benchmark 10-year yield held below 1.4%. The CBOE Volatility Index, or VIX, spiked more than 20% to hover above 25.

U.S. crude oil prices sank 3% to trade below $69 per barrel as restrictions mounted in Europe, stoking jitters around energy demand. Countries from Germany to Ireland imposed curfews or travel restrictions in recent days given the rapidly spreading new variant. And the Netherlands over the weekend announced a nationwide lockdown of non-essential stores, bars and restaurants until Jan. 14. As of this weekend, the Omicron variant had been reported in about 89 countries, with cases doubling every 1.5 to 3 days.

Renewed fears over the economic impact of the Omicron variant compounded with last week's concerns for investors around the prospects of tighter monetary policy, with the Federal Reserve accelerating its rate of asset-purchase tapering and signaling three interest rate hikes could be coming next year. Last week, each of the three major indexes posted steep weekly losses. The Nasdaq Composite fell 3% and the S&P 500 and Dow each dropped by nearly 2% for the week.

Still, other updates around the effect of current COVID-19 vaccines on the variant were more upbeat. Moderna (MRNA) said Monday that a booster, or a third dose, of its shot increased Omicron neutralizing antibody levels. This echoed results from Pfizer (PFE) and BioNTech (BNTX) from earlier this month about the effectiveness of their vaccine's third dose on neutralizing Omicron. Shares of Moderna gained more than 7% ahead of the opening bell.

Investors also digested the unexpected news that Senator Joe Manchin (D., W. Va.) would not support President Joe Biden's $1.75 trillion Build Back Better social policy bill. Manchin, speaking on Fox News Sunday, said he had discussed with Democratic House and Senate leaders and Biden, but was unable to come to an agreement on the bill given concerns about inflation, the national debt and ongoing pandemic.

White House Press Secretary Jen Psaki released a statement calling Manchin's comments "a sudden and inexplicable reversal in his position," and said the administration would work to move forward with the legislation next year.

Still, Goldman Sachs this weekend slashed its quarter GDP forecasts for 2022 following Manchin's withdrawal of support for the bill. The economists, led by Jan Hatzius, said they expected the "fiscal impulse will be somewhat more negative" than previously expected next year, in absence of the spending on social and climate-related policies included in the bill. The firm lowered its U.S. GDP forecast to 2% from 3% for the first quarter of 2022, to 3% from 3.5% for the second quarter, and to 2.75% from 3% for the third quarter.

All 11 major sectors were in the red in the S&P 500, with the cyclical energy, financials and materials sectors leading the way lower. Consumer staples, utilities and healthcare outperformed, though these sectors were also lower during the session.

In the Dow Jones Industrial Average, Goldman Sachs, The Travelers Cos. and Caterpillar underperformed.

Oracle (ORCL) announced on Monday it planned to buy Cerner Corp., an electronic medical records company, for $28.3 billion. This would be the largest-ever deal for Oracle.

The deal is expected to close next year, and would give Oracle access to Cerner's trove of software used to record healthcare data electronically. Cerner shareholders will receive $95 in cash for each share held, which marks a premium of nearly 6% compared to Friday's closing prices for the stock.

Here's where markets were trading as of Friday morning ahead of the opening bell: 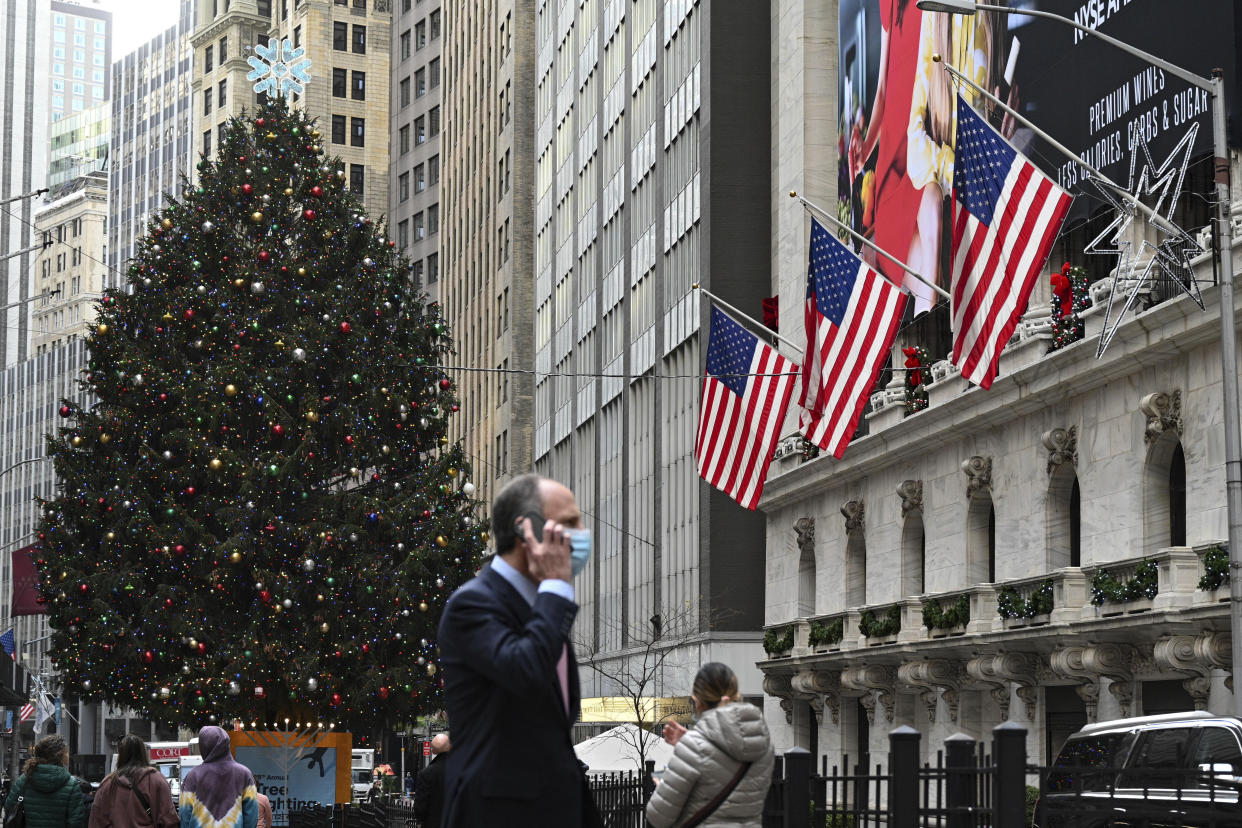