Street with the slowest broadband in Britain suffers speeds 2,000 times slower than the fastest – and it takes 102 hours to download a film on Netflix

Next time you’re struggling to load a webpage, spare a thought for the residents of one Cheltenham street who have the UK’s slowest broadband connection.

This is 1,899 times slower than the street with the fastest speeds and means it would take 102 hours to download a two-hour HD film on Netflix.

At the opposite end of the scale, it would take four minutes to download the same film if you lived in Abdon Avenue, Birmingham, where average speeds were fastest – reaching 265.89Mbps. 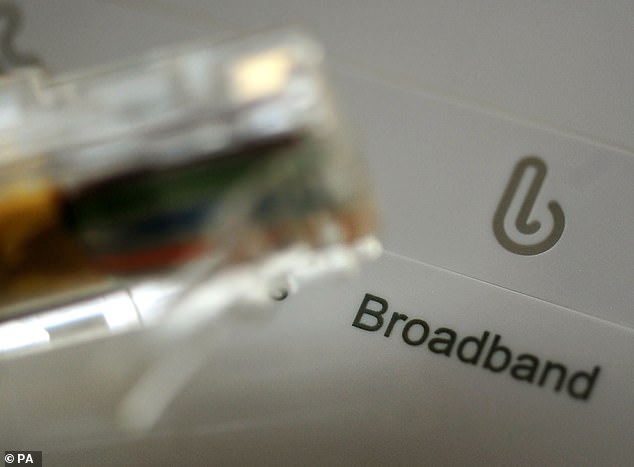 The residents of Greenmeadows Park in Gloucestershire have an average download speed of just 0.14 megabytes per second (Mbps), research shows. (File photo)

Mike McCormick, 51, who runs a pet shop near Greenmeadows Park, said his firm often struggled with speeds as low as 1Mbps.

He said: ‘Even simple tasks like answering emails can be a huge problem … it’s really frustrating, it’s been this way for several years.

‘There has been a fibre optic cable installed recently but you have to pay a huge amount to connect to it, so we’re just struggling on with the awful broadband.’

Chris Evans, 63, who runs a garden centre off Greenmeadows, said he was not surprised to hear his area had such slow speeds.

He said: ‘It was painfully slow. We couldn’t watch BT Sport, we signed up to Netflix and Amazon – not a chance. It was constantly buffering. We’d paid all this money and we couldn’t use the services.’

The data, collected by website uSwitch, showed the other hardest-hit streets were Poplar Avenue in Oldham, Chesham Road in Wilmslow, Cheshire, and Cynghordy, in Llandovery, Wales. 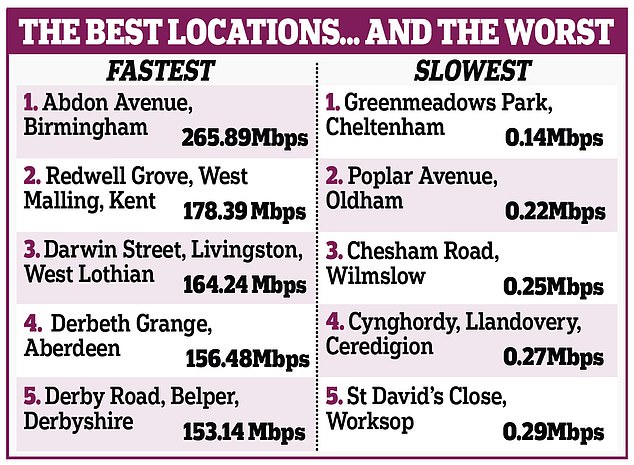 The average broadband speed in the UK is 46.2Mbps. However, more than a quarter of broadband users struggled with speeds of less than 10Mbps, and one in eight had to make do with 5Mbps.

This would make internet calls to family difficult, and pose a challenge to those who work from home.

Despite Gloucestershire topping the list of the worst streets for internet speeds, the South West also dominated the list of those with the fastest.

Five of the top 20 streets were in Devon, Dorset, Cornwall and Wiltshire – suggesting broadband connections in the UK are still a postcode lottery.

uSwitch said slow speeds were often caused by particular houses being located too far from the nearest green cabinet which receives broadband signal.

Another reason may be a lack of awareness of the availability of superfast broadband, the price comparison site said.

Ofcom data in February showed 95 per cent of Britons had access to superfast broadband of 24Mbps or more. But uSwitch said just half of internet users believe they have access to these connections, which cost around £5 more a month.

Dani Warner, the broadband expert at uSwitch, said: ‘Awareness of fibre broadband availability continues to be the biggest hurdle to people getting faster download speeds.

‘For households struggling on sluggish internet connections, it’s worth having a look at a coverage map to give you an overview of the services available.’