Despite difficult ice conditions and curious polar bears, a German research icebreaker with 100 scientists and crew members is comfortably adrift in the frozen Central Arctic, two months into a yearlong expedition to study the region’s changing climate.

“Mosaic is in full swing,” Jessie Creamean, a researcher from Colorado State University, wrote in an email, using the informal name for the expedition, the Multidisciplinary Drifting Observatory for the Study of Arctic Climate. The ship, the Polarstern, has been frozen into the ice since early October; Dr. Creamean and other researchers will be on board until next month, when a first relief team of scientists arrives on another icebreaker.

Dr. Creamean has been setting up portable equipment, nicknamed C-3PO, on the ice to sample particles and droplets in the air as part of her studies of how Arctic clouds form. She is also an “ice boss” on a 12-person crew that goes out every Monday and takes 60 ice cores — each about 20 to 40 inches long — for studies by various scientific teams. 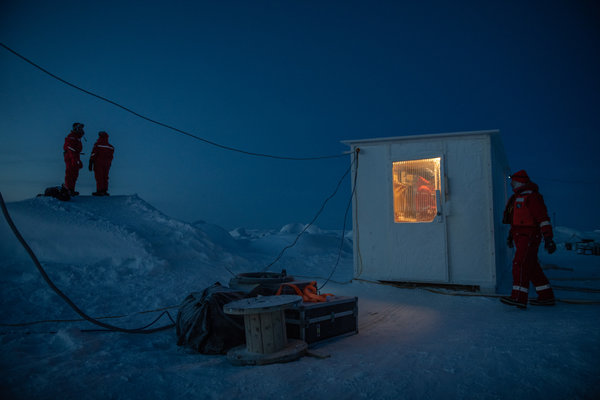 All of this is happening in 24-hour darkness, which set in just a few days after the ship, which left northern Norway in late September, stopped next to an ice floe in the Laptev Sea, far north of the Siberian coast, and froze in place.

The ship has been drifting with the ice since then, driven by wind and currents and usually covering five miles a day or less, and is about 300 miles from the North Pole. If all goes as planned, the ship should come out of the ice late next summer in the Fram Strait between Norway and Greenland.

The $155 million expedition, organized by the Alfred Wegener Institute in Germany with participants from 18 other countries, is meant to advance understanding of how climate change will affect the Central Arctic, a region that is warming about twice as fast as other areas but has been studied relatively little because of its remoteness.

Thomas Krumpen, a Wegener Institute senior scientist who was aboard the Akademik Fedorov, a Russian icebreaker that accompanied the expedition for the first month before returning to Norway, said that finding a good ice floe had been difficult. “We were facing quite thin ice with only a few floes around that were thick enough to work on,” he said.

The thin ice has meant the expedition has had to delay offloading some of the heavier equipment, as well as construction of an ice runway that will allow planes to conduct relief flights after the ice gets too thick for all but the most powerful icebreakers, Dr. Krumpen said.

Dr. Creamean said the ice continued to be an issue. “It’s very dynamic right now, shifting and shearing,” she said.

A storm last weekend with winds up to 45 miles an hour opened several cracks, or leads, in the ice, including one about three feet wide between three of the science stations and the ship. Crews bridge such gaps with sleds and other equipment.

The expedition has also been visited by polar bears, including a mother and cub who sniffed around electrical equipment on the ice. Polar bear encounters are taken very seriously — researchers on the ice must be accompanied by armed guards, and must scramble to safety if a bear is sighted. So far there have been three bear-related ice evacuations.

“Luckily, no bad encounters and everyone (including the bears!) has remained safe,” Dr. Creamean wrote.