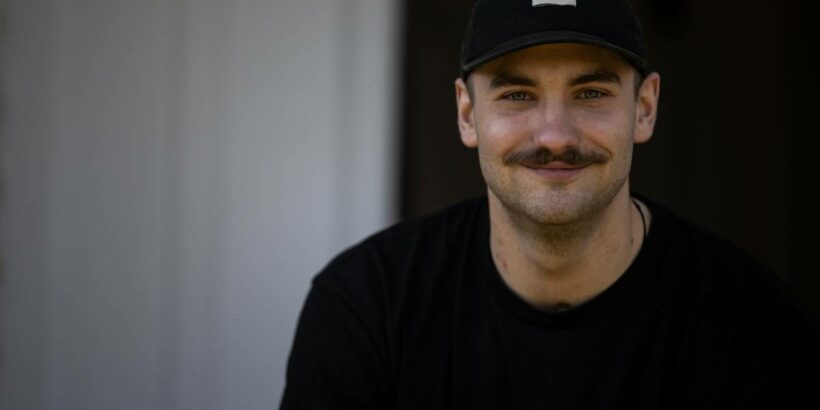 A young man spent 7mins and 29secs underwater at an Auckland Council pool before being dragged unconscious from the water and brought back from the dead.

Canterbury University student Hamish Jamieson had been starved of oxygen and his heart had stopped until he received CPR and five electrical shocks from a defibrillator.

Now recovered and speaking exclusively to the Weekend Herald, he said he was grateful to be alive but struggling to comprehend how he survived.

“To know I was underwater for that long and in that state, I am amazed and incredibly thankful to still be here.

It’s thought Jamieson floated limp and unconscious for up to six minutes after passing out while holding his breath in an episode known as shallow water blackout.

An expert says Jamieson is fortunate to be alive and it’s remarkable he didn’t suffer a severe brain injury from lack of oxygen.

CCTV footage would later reveal two distracted lifeguards chatting to each other nearby as Jamieson drifted lifelessly at the bottom of the pool.

And though an investigation into the near-drowning revealed a series of failures by staff and management, Jamieson and his family were never alerted to the findings or even told how long he was submerged.

Jamieson nearly drowned at Glenfield Pool and Leisure Centre in June last year. It has never been reported.

Jamieson had been practising Wim Hof breathing – a meditative breathing technique to increase energy and improve cardiovascular fitness – when he submerged and lost consciousness.

He was unaware the breath-holding technique should not be practised underwater.

The Herald has fought for months through the Official Information Act for the release of a “confidential” Incident Investigation Report, which the Auckland Council commissioned after the near fatality.

The report, finally obtained last month after intervention from the Ombudsman, praises the emergency response, but reveals systemic safety issues that contributed to Jamieson nearly dying.

It says a concerned pool-goer alerted lifeguards when Jamieson had already been underwater for 5 minutes.

One of the lifeguards glanced in Jamieson’s direction, but it took another 2.5 minutes before they realised he was drowning and a rescue commenced.

Jamieson was dragged from the pool and resuscitated by lifeguards and ambulance crew.

The final-year chemical and process engineering student spent the next six weeks in hospital, including 19 days in an induced coma on a life support machine in ICU.

He developed pneumonia, blood clots and a lung bleed. His parents held vigil while he fought for his life.

“No one really expected me to survive under the circumstances. My heart actually stopped. It’s pretty scary.

“I remember sitting at the bottom of the pool and then a flash, opening my eyes underwater before blacking out with my lungs full of water.”

He came to in hospital weeks later in a confused series of “very dark and twisted hallucinations” because he was heavily medicated.

Tubes had been inserted into his body and he was hooked up to a machine that kept him alive.

He lost 20kg, required blood transfusions and had to learn how to walk again because of severe muscle atrophy.

And despite suffering short-term physical effects and missing a year at university, incredibly, Jamieson has now made a full recovery, resuming his studies six weeks ago.

Speaking from his Christchurch flat, he stressed he held no animosity towards the lifeguards who hadn’t notice him unconscious in the pool.

He had met them in person to thank them for saving his life.

“I’m so grateful for their efforts.

“I couldn’t ask for a better outcome. I’m still here and I have no long-term injuries.”

He also extended his gratitude to the concerned public, emergency responders, medical staff at Auckland and North Shore hospitals, “and everyone who was involved in my rehabilitation including friends and family”.

“To say I’m incredibly grateful is an understatement.”

While amazed that he had survived 7.5 minutes underwater, he believed his health and fitness at the time contributed to him being alive.

As to failures identified in the report, Jamieson said he didn’t want to blame anyone as the problems were “systemic”.

“I’m not out to discredit anyone because of this report surfacing. That’s not my goal.

“They did everything they could. There might have been problems and unfortunately sometimes incidents are what drives change.

“It looks like they’ve implemented corrective actions and that’s how the world moves forward. I just hope those changes prevent this happening to someone else.”

He said he was never interviewed for the report and had no idea why the council did not inform him of the findings, which he learnedfrom the Weekend Herald.

Jamieson said his ordeal had not deterred him from swimming. He had even returned to the pool where he nearly died.

He wanted his experience to serve as a warning to others about the dangers of holding your breath underwater for lengthy periods.

The November 30 report is marked “confidential and the property of Auckland Council”.

The near-drowning happened just before 9pm on June 23 last year. The pool was nearly empty, which may have made the lifeguards complacent.

After submerging for the third time, he remained in a stable position underwater before he “became limp” after 2mins, 16secs, when his “outstretched body commenced to drift”.

The two lifeguards spent nearly 11 minutes talking to each other at a lifeguard station before realising Jamieson was in trouble and rescuing him.

“This behaviour distracted the lifeguards from carrying out effective scanning and supervision of the pool,” the report says.

“Their lowered self-discipline to focus on the task at hand and recognise the distraction are factors that likely contributed to [Jamieson] not being seen underwater.”

Although the report described the emergency response as “admirable and worthy of high praise”, it also listed 12 underlying causes that contributed to Jamieson’s experience.

• Lifeguard distraction and failure to recognise the unfolding emergency.
• Budget constraints delayed managers purchasing a taller lifeguard chair that could enable proper visual scanning of the pool.
• A lifeguard shortage put pressure on staff to fill extra shifts.
• Inadequate lifeguard supervision, with lifeguards overseen by the centre manager who had no aquatic expertise.
• In-house safety protocols not properly followed by staff and management.
• An absence of “robust risk management” to ensure the minimisation or elimination of health and safety risks.

The report found management had not provided effective oversight of safety management at the pool.

“There were a number of precursors that led to this incident, but the signs had not been spotted.

“Collectively, there were missed opportunities to improve safety outcomes that may have prevented this incident.”

The report made 23 recommendations to improve safety, including “informing and instructing lifeguards of ‘shallow water blackout’ and the dangers of breath holding”.

'Difficult for lifeguards to monitor'

Auckland Council head of active recreation Dave Stewart said Jamieson had been holding his breath underwater and appeared to have blacked out because of lack of oxygen.

It highlights a practice that lifeguards and public pool providers were increasingly concerned about.

“Shallow water blackout, which can happen when a swimmer faints in the water after repeatedly holding their breath for a long time, is dangerous for the swimmer and difficult for lifeguards to monitor.

“The actions of the lifeguard team resulted in a full recovery for the individual, however it was a harrowing experience for everyone involved.”

Stewart said the council carried out a full investigation, interviewing staff and customers, reviewing CCTV footage and speaking informally to the victim.

The investigation was not about “apportioning blame” but aimed to identify “operational improvements” to mitigate further risk.

“As a result, we’ve made some adjustments to the way we do things at our sites and are also talking with our teams about the increasing popularity of breath-holding techniques in the pool.”

Other improvements including better poolside procedures relating to lifeguard positioning and patrols, and standardising “concentration break” times away from direct observation duties.

Stewart acknowledged the council should have updated Jamieson on the investigation findings, “particularly the improvements we made as a result”.

“We’re really glad that the person involved recovered from their experience and we hope that this is a reminder to other pool users to think carefully before putting their lives in danger.”

Jamieson, who was 24 at the time, was likely saved by his age and the quality of resuscitation by professional lifeguards, an expert says.

Mitchell said the main danger from spending that long underwater and unconscious was hypoxia (lack of oxygen in the blood) causing a brain injury. The longer the person went without oxygen, the more likely and severe a brain injury would be.

“It’s an almost invariable consequence of a significant period of time without oxygen.

“Time is critical – probably the most critical thing.”

Another potential consequence was heart failure leading to cardiac arrest, and drowning.

“Seven and a half minutes puts him in a bracket that’s fairly high risk of a bad outcome. But his good outcome is not a world first.”

Mitchell was aware of cases overseas in which people had survived up to 30 minutes submerged without oxygen, but they tended to be young children “rescued from very cold water”.

Jamieson was probably still here because he was rescued by trained lifeguards with the right equipment, Mitchell said.

“He’s in the zone, which is high risk for a bad outcome. But he’s young, he’s had good resuscitation by professionals who knew what they were doing. He certainly had a few things going for him.”

Mitchell said that if Jamieson had been hyperventilating before holding his breath, that would slightly increase oxygen levels in his blood.

But it also lowered the levels of carbon dioxide, which created increased risk of blackouts by making it easier for someone to hold their breath for a long time.