University drug dealer who claimed ‘sharing MDMA is like buying a round of beers’ when he gave law student friend, 19, ecstasy before he fell to his death is SPARED jail 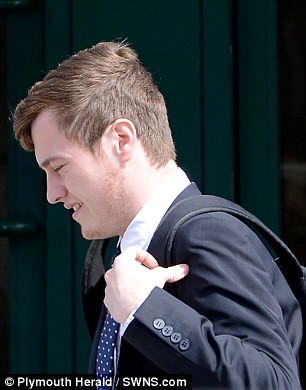 A student who gave ecstasy to a friend that died hours later after taking the Class A drug has avoided jail after he compared buying the illegal substance to getting in a round of beers.

Alexander Chippindale, 20, gave MDMA to law student Luke Johns before he fell from a stairwell in their nine storey halls of residence in Plymouth.

Chippindale said he had been one of a number of University of Plymouth students who had all bought the drugs together at a discounted price with friends.

Ahead of his sentencing, Chippindale, from Plymouth, Devon, urged others not to blame him for his friend’s death and that sharing MDMA was ‘common in student culture’ and similar to ‘pooling for beers’.

Mr Chippindale pleaded guilty to supplying the MDMA which Mr Johns had taken on the night he died.

Legally someone is guilty of the offence if they are involved in getting hold of the drug – not just if they sell it to strangers on the street.

The judge at Plymouth Crown Court took sympathy on the defendant and spared him jail, saying he was not ‘primarily responsible’ for the 19-year-old’s death.

Mr Chippindale also pleaded guilty to being concerned in the supply of Class A drugs in the 16 months leading up to the death of Mr Johns in February 19, 2017.

The media student, who has since moved to Plymouth College of Art, also now pleaded guilty to having five wraps of MDMA in his room for personal use.

He was given a 12-month community order and given 120 hours unpaid work with 20 days intensive probation supervision.

Judge James Townsend told him: ‘If there is anything positive to come out of this, it is that others should realise the dangers of behaving in certain ways and in fact the message that dealing drugs at whatever level can result in misery.

‘This is also a tragedy for you. I hope you can move on and put this behind you.

‘You will obviously never forget what happened. You have the makings of a useful member of society.’

Speaking outside court after a previous hearing, Chippindale begged others not to blame him for his friend’s death.

He said: ‘Hopefully, people will learn their lessons and others will not make the same mistakes as I have. Please don’t make me out to be a bad person.

‘I lost a good friend. I have suffered from panic attacks and been diagnosed with anxiety and depression since the incident and everything in between. 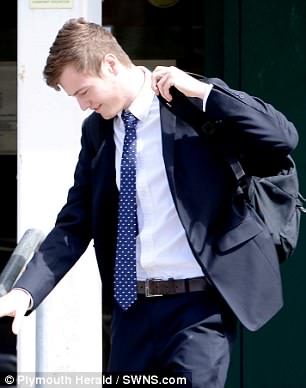 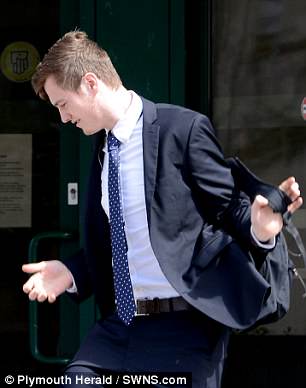 ‘It is like pooling money for buying beers. It is actually really wrong and not just a little bit naughty.’

Lee Bremridge, for the Crown Prosecution Service, said: ‘This is a tragic case which shows the dangers of too much alcohol and taking illegal drugs.’

Ali Rafati, for Chippindale, said the death was ‘a cloud which he will have to live with for the rest of his life’.

Chippindale was said to have enrolled on a counselling service to tackle his drugs misuse and was telling others of the dangers of drug-taking.

An inquest heard in January that Mr Johns, who is 6ft 8ins tall, died from multiple injuries. The coroner recorded a verdict of accidental death.

Tributes poured in to the popular student Mr Johns, who was from Wales, after his death.

Several bunches of flowers left near the stairs at the Discovery Heights student halls in Plymouth, next to lit candles, a bottle of scrumpy and cans of cider.