A student who fired off more than 100 online job applications without getting a single reply snapped up a job within two days- by spending four hours passing his CV to commuters at busy train stations.

Kamran Hussain, 21, from Walthamstow, in north east London, decided to take the ‘gamble’ after hearing nothing back from dozens of firms he applied to on the internet.

On Tuesday the accounting and finance student woke up at 5.30am, printed off 35 copies of his CV and made his way to Liverpool Street station, London, for 7:30am.

He stood with a sign reading. ‘Aspiring accountant. Looking for entry level job. Ask for CV’, and after standing there for two hours, made his way to Cannon Street for the lunchtime rush. 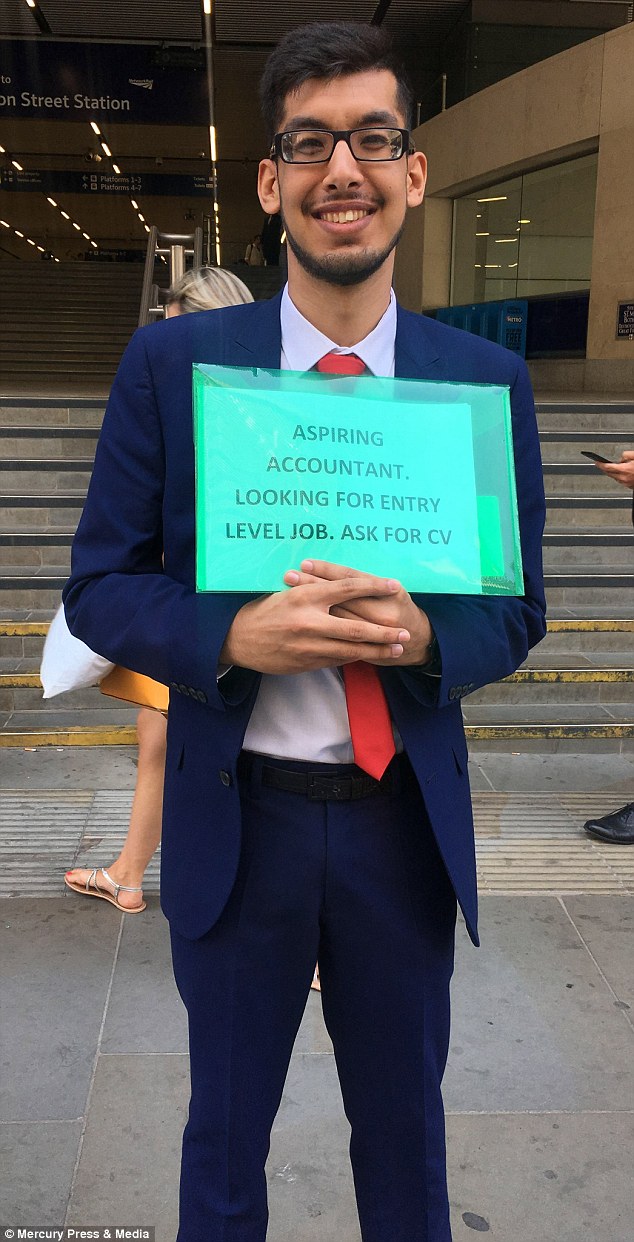 The accounting and finance student woke up at 5.30am, printed off 35 copies of his CV and made his way to Liverpool Street station, London, for 7:30am

After just four hours of standing on the street he only had four CVs left and the interview offers started rolling in.

The next day he was called into interview, accepted a job offer and is now set to start his new role as a transaction executive for a marketing firm on Wednesday.

The 21-year-old said: ‘My gamble paid off. It almost makes me want to cry, I’ve been given a chance.

‘It’s been the best experience of my life, this company has now given me my break and I couldn’t be more thankful.

‘I decided that if I was going to have a chance of finding something, I would have to go and stand on the street and hand out my CV to people who were interested. 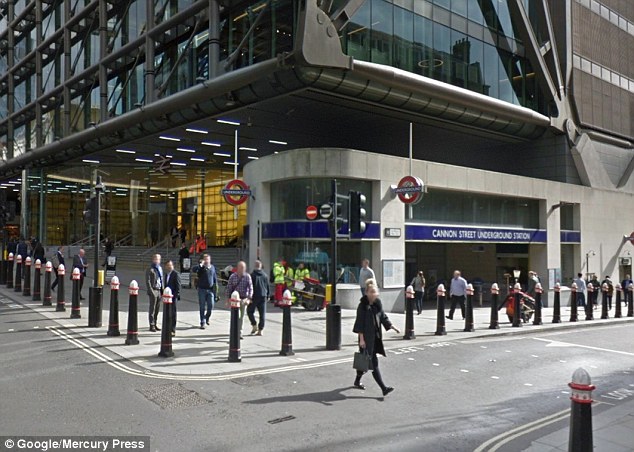 ‘I woke up at 5.30am to get there early and stood outside Liverpool Street train station from 7.30am to 9.30am, then moved to Cannon Street for two hours over lunch.

‘Some people weren’t interested and would walk past in a rush, but others stopped to take a copy or have a chat with me.

‘I had 35 copies of my CV in my folder and returned home that night with just four.’

Kamran had a difficult time during his Accounting and Finance degree from the University of Kent in Canterbury after struggling to adjust to student life and academia.

In his third year he applied for more than 100 jobs, but heard nothing back. 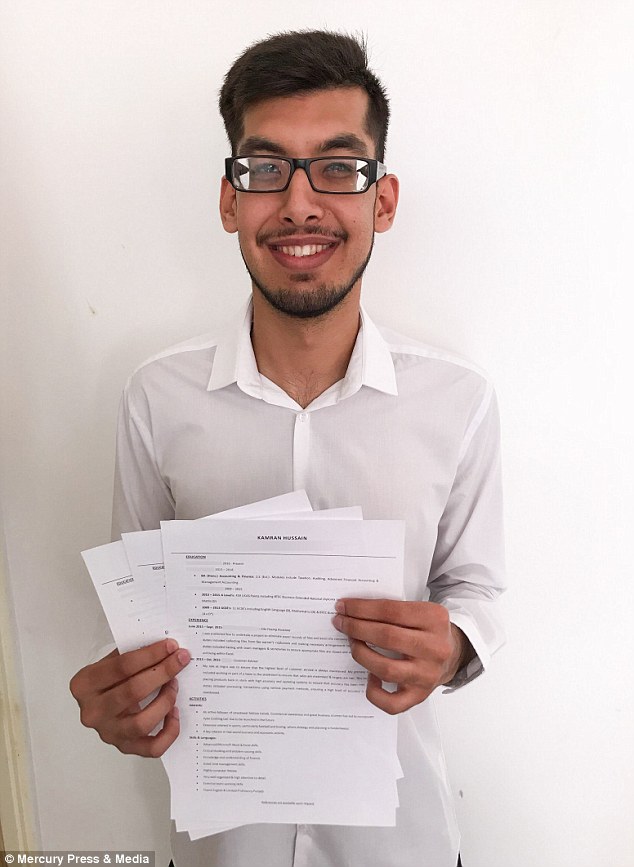 Kamran had a difficult time during his Accounting and Finance degree from the University of Kent in Canterbury, so knew he had to do something to stand out from the crowd

The student knew that on paper his qualification, a third-class degree, didn’t fare well against his peers with firsts so he knew he had to get creative.

Less than 24 hours of starting to pass his CV to commuters and Kamran had been contacted directly via LinkedIn by a company director who was impressed with his initiative.

A day later he left her office with a job.

Kamran said: ‘I knew I had to up my game to succeed against first-class graduates.

‘At first I struggled adjusting to university and I was really close to leaving. I had my mind set by the end of the first semester but I was convinced by my housemates to stay and I did. 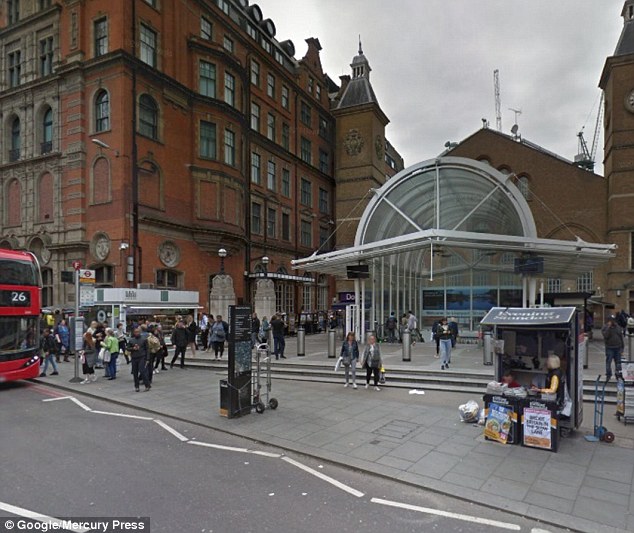 ‘Then I struggled with exams as I came from a coursework-based course at sixth form.

‘When I finished I wanted to get out of my comfort zone, I was desperate to succeed by myself and be independent.

‘I knew I wasn’t competitive enough on paper so when I was sending off my CV to recruiters they were just falling off the top of a pile.

‘I was starting to feel really disheartened, I went into a really dark spot because I was sending off applications and hearing nothing back.’

In the end it was Kamran’s unrelenting work ethic from the age of 16 that impressed his new employer who offered him a job on the spot after his interview. Riding high: After his innovative method of getting employers’ attention Kamran has now got himself a brand new job

Kamran said the company director saw his potential and despite his low grades decided to give him a shot.

He added: ‘Nowadays you need to do something that makes you stand out.

‘I have been working in retail since I was 16 and I had a summer job at a law firm doing admin.

‘I have the work ethic and I believe you should never give up.

‘Since handing out the CVs around 20 recruiters have been in touch wanting to offer me work. The director of one company personally reached out to me via LinkedIn.

‘She said she believed in my potential and was interested in what I’d done, I was really honoured.

‘On Wednesday night I had a call asking if I was free for an interview on Thursday morning. I went along and I’m proud to say I got a job offer which I have accepted.’

Now Kamran is urging others in his position to be ‘ballsy’ and think outside the box if they’re struggling to get a job. 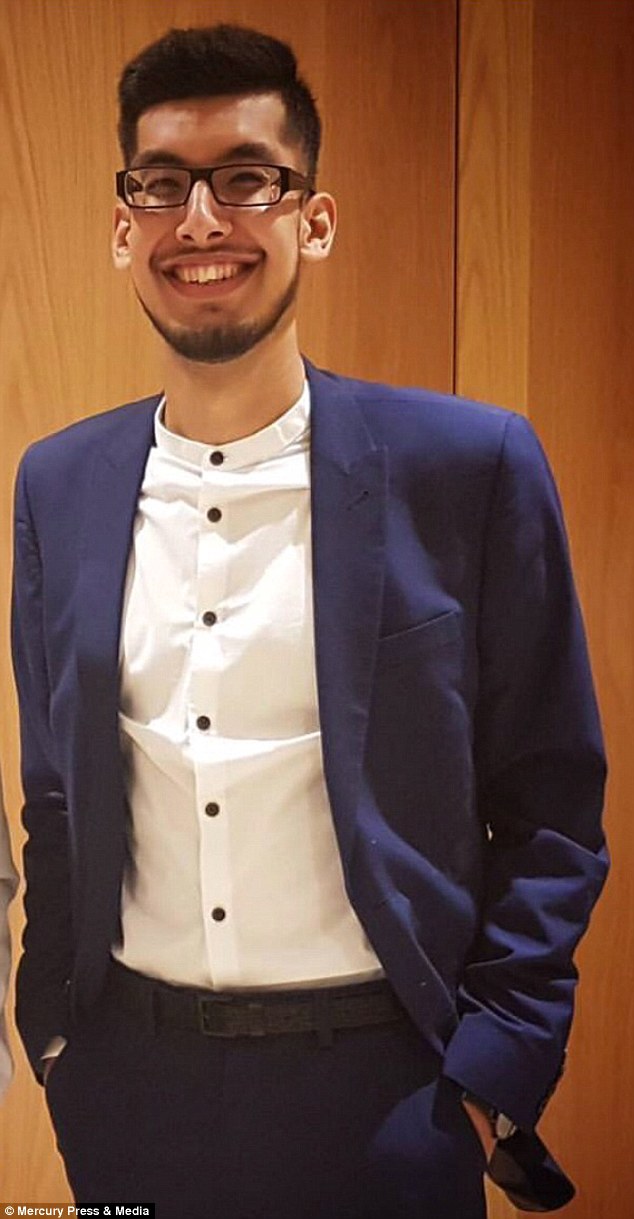 Since handing out the CVs around 20 recruiters have been in touch with Kamran wanting to offer him work. One company director personally reached out to him via LinkedIn

He claims this has been the best experience of his life and recommends forward-thinking students follow in his footsteps instead of sending their CVs into ‘an abyss’ of recruitment websites.

Kamran said: ‘The feedback and support I’ve received has been like no response I’ve had before. It’s really shocked me.

‘People have said it was a really ballsy thing to do and it took initiative.

‘You have to think outside the box because recruiters will get between 80 and 100 applications for each vacancy.

‘I’ve never had this much positive attention, it’s really great.

‘I 110 per cent recommend anyone coming out of university who might have received a lower grade because they’re having a hard time, or whatever reason, tries this.