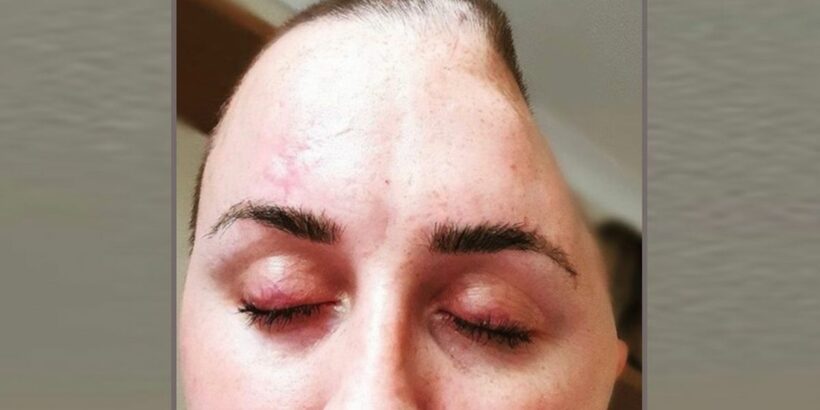 A student who was left with half a skull after attempting to commit suicide has made an incredible recovery in a bid to turn her life around.

23-year-old Kayleigh Moore, from Hull, had already attempted suicide multiple times when she jumped off a footbridge over a dual carriageway near Hull on April 17, 2020.

A passing motorist – who initially thought she was a piece of rolled up carpet in the road – found her, HullLive reports.

Kayleigh's father is a police officer, and he was on shift on the night of the incident, responding to the motorist's 999 call.

However, as soon as his colleague who arrived first recognised that the victim was his daughter, they called in and asked for him to be diverted and informed.

Kayleigh was then rushed to Hull Royal Infirmary where a trauma team worked on her.

Her mother, an ICU nurse, was also on shift that night, and the news had to be broken to her.

For the next two weeks it was "touch and go", with Kayleigh suffering from extensive injuries as a result of the trauma.

She had swelling and a bleed on the brain which resulted in her suffering a stroke, and she had broken several ribs, bones in her face, her ankle, foot, and wrist.

Kayleigh underwent two emergency brain surgeries to relieve the pressure on her brain, and surgeons performed a craniectomy – removal of a part of her skull.

Her distraught parents were allowed at her bedside, despite Covid restrictions, as doctors had warned them that Kayleigh might not survive.

However, after two weeks, she started to wake up. It was the start of a long recovery which is now, 14 months later, nearing its end.

Kayleigh, who was studying nursing at Hull University, said she felt "lonely" from a young age and endured difficulties at school which she attributes to the start of her mental health battle.

Kayleigh dropped out of university at the start of her third year, in October 2019, as her mental health took a sharp decline.

Over the next three months, she was in and out of the Avondale mental health inpatient unit, voluntarily at her own request as she feared for her own safety, but she was always discharged after a short stay.

She was also taken by ambulance to Hull Royal Infirmary "five or six times" after further attempts to take her own life.

But recalling the night when she jumped off the bridge, between Hedon and Paull, she says: "I don't remember most of it because of the trauma. I know the day before I had been to see the mental health team, and I said I was struggling.

"I reached out to two friends and they said all of a sudden I just stopped replying to texts.

"I posted the word 'sorry' on my social media, and I have kept that post as a reminder of how far I've come.

"I also recorded a video saying 'sorry' and then I jumped."

For two weeks she was on a ventilator in ICU, being cared for by her mum's colleagues.

In October last year she had a cranioplasty, which involved creating a metal plate to replace the part of her skull that was missing, and she embraced fabulous long wigs after having her head shaved for the operation.

"Half my head is now metal," said Kayleigh.

She does suffer from headaches as a result of her brain injury, but controls them with medication.

And although she still suffers pain if she walks more than two or three kilometres, she is walking further every time and improving; she is also back at the gym where she is running and swimming.

Despite her awful trauma, Kayleigh considers herself to be the best she's been in years. She is currently applying to be allowed back to university in September to resume her third year of nursing studies, and is awaiting approval from occupational health and her surgeon that she's well enough to return.

She wishes to thank all the medical professionals who saved her life that night.

And for anyone struggling with mental health issues, she urges them to force themselves to go outside, for exercise, to meet a friend, and to talk to people.

"I'm in such a better place now. I didn't realise my own strength until now. I have come through nearly dying, but I feel I have got a bright future ahead of me now."