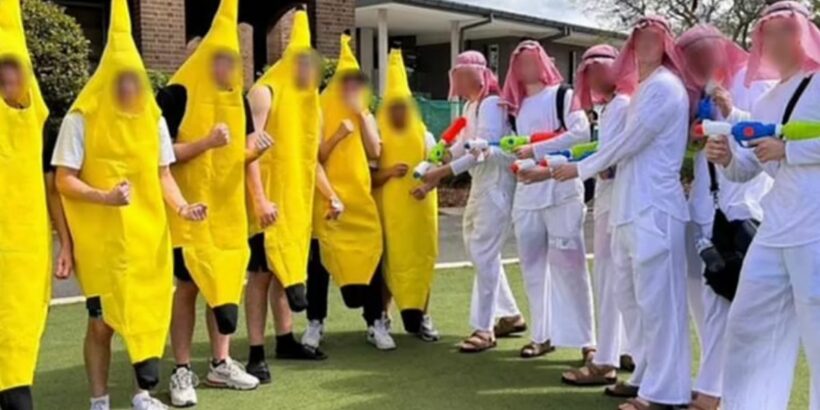 Students who dressed up as 'terrorists' at school have been slammed for Islamophobia.

A group of teenagers armed with water pistols wore all white traditional Islamic clothing to celebrate their high school graduation.

Their look, which was complete with a kaffiyeh headdress and sandals, was reported to the press by a fellow student at Gilroy Catholic College in, Sydney in Australia.

According to Seven News, students were invited to dress up for Year 12 muck-up day but the outfit choice of six pupils has led to an apology from their headteacher.

A student sent the media outlet a snap of the offenders opposite pals in banana costumes, Mail Online reports.

He explained: "As a graduation celebration, a group of primarily Caucasian students dressed up as stereotyped Arabic men, complete with toy guns to portray 'terrorists'.

"This is highly offensive to Middle Eastern individuals, communities, and culture."

The incident was merely the latest example of 'blatant Islamophobia' seen in schools, the student added and noted it was damaging to Islamic and Middle Eastern communities.

Responding to the outfits, Principal Cheryl Merryweather insisted they do not reflect the college's values, and admitted she should have told the "small group of students" to get changed.

"On behalf of the Gilroy community, I am very sorry that this has happened.

"The decision to dress this way showed very poor judgment. I also apologise for not directing the students to change out of these costumes.

"At Gilroy College, we take pride in welcoming people of all faiths and backgrounds. We know that this incident did not represent our College values and commit ourselves to doing better in the future."