Pressure has continued to build on universities to give refunds for the ‘sub-standard’ student experience caused by the coronavirus pandemic.

It came as the under-fire Education Secretary Gavin Williamson effectively confirmed the problem would last for months, revealing they would have to quarantine for a fortnight in their halls if they want to go home for Christmas.

Currently up to 4,000 students across Britain are now self-isolating for a fortnight after more than 500 cases of Covid-19 were confirmed across at least 32 campuses.

In a fiery question in the Commons yesterday DUP MP Sammy Wilson told Mr Williamson: ‘The climate of fear deliberately created by ministers and their advisers has done untold damage to individuals and the economy as a whole and has now hit students and universities with lock-up of students, students being denied face-to-face education and unable to engage with the activities normally associated with student life. 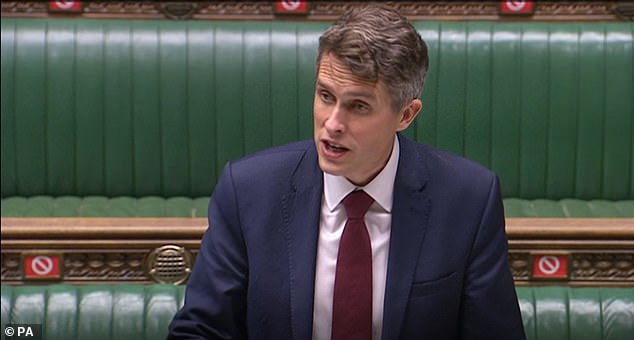 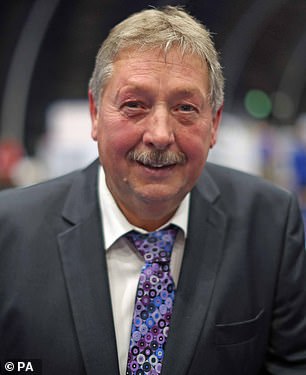 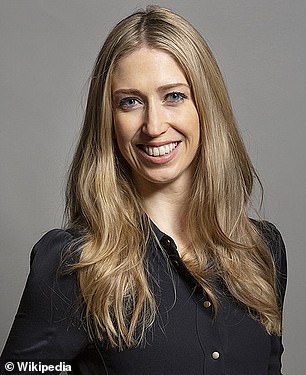 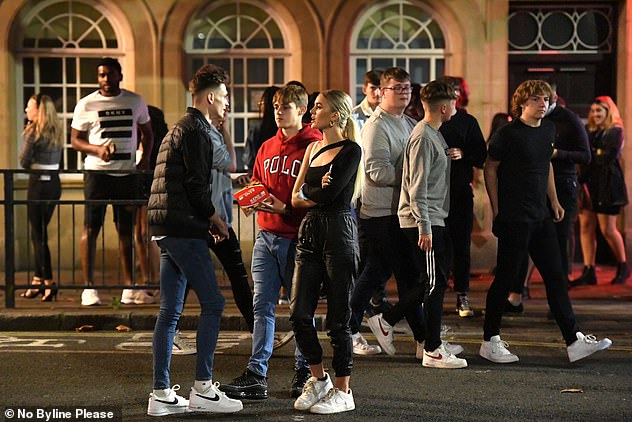 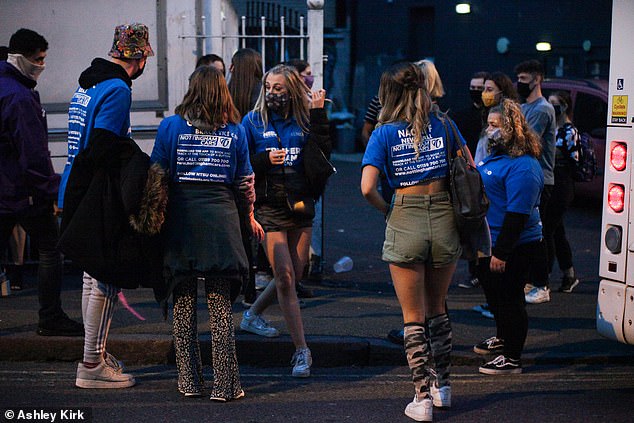 ‘Does the education minister think it is fair that universities still hold onto the money paid by students when they are not offering the student experience that they promised?

‘Maybe you should clarify was the direction that students can go home at Christmas the result of government guidance or a decision by the universities themselves?’

Mr Williamson insisted it had been government guidance as one of his party’s own MP’s appeared to question policies.

Helen Trott said: ‘Students will be facing full fees on what are now be online courses. Financial burden must be shared with universities 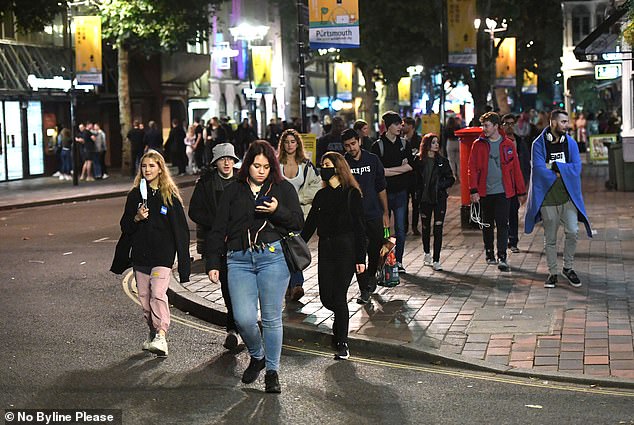 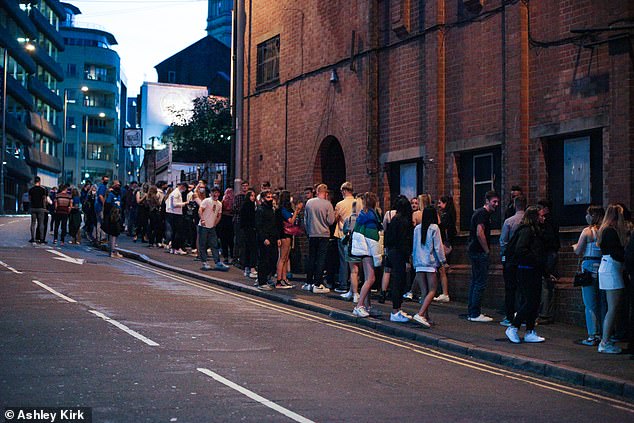 Queues of students were seen outside Nottingham’s Rock City venue, some not distancing 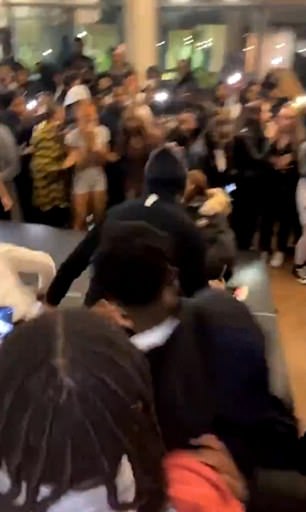 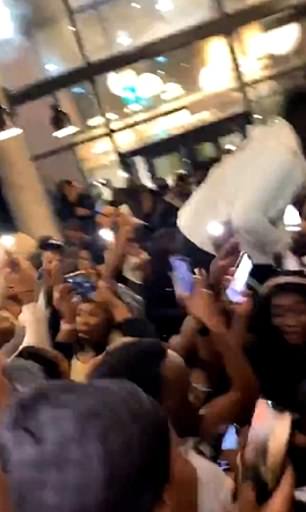 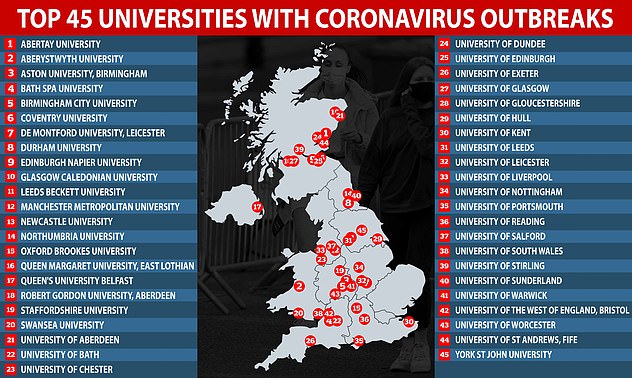 University challenge: There are 45 so far with coronavirus outbreaks in the UK

‘Can the secretary of state ask the office for students to confirm and strongly advise that university bonuses will not be paid out unless fees are lowered?’

Mr Williamson responded: ‘We have had an issue of excessive vice-chancellor pay and bonuses for some time.

‘I will ask the office for students to look at this and give and give very strong steers on this matter to make sure bonuses aren’t going out as a result of this crisis.’

Hundreds of undergraduates for Coventry University went wild on Tuesday night climbing on top of ping pong tables and raving at one of the accommodation blocks. 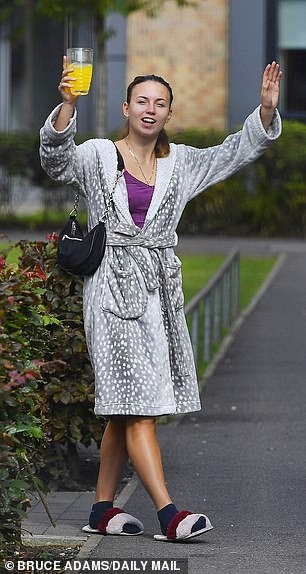 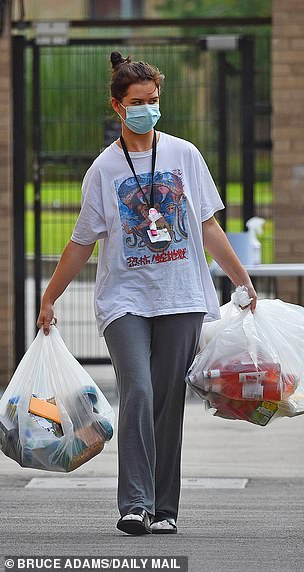 Students at universities hit by coronavirus should seek tuition fee refunds if the quality of their course slips, the higher education watchdog said last night.

At least 40 universities have recorded virus cases – around one in four – leaving thousands of students locked down in halls.

They have complained of ‘disgusting’ conditions as they are essentially sealed off from the outside world.

The situation has caused growing anger over the prospect of no face-to-face learning despite fees of up to £9,250 per year.

The Office for Students (OfS) regulator has now urged students who feel the quality of their education has been affected to complain, warning universities not to take a ‘blanket policy’ against refunds.

Chief executive Nicola Dandridge said: ‘Students have a right to good quality higher education – whether that is taught online, in-person or a mixture of the two.

‘Where they feel this is not happening they can raise concerns with their university, escalating complaints to the Office of the Independent Adjudicator where a resolution cannot be found.

‘They can also inform the OfS, and we can and will investigate if we believe that universities have not taken all reasonable steps to protect standards or where quality is slipping for groups of students.’

She added: ‘In considering whether to make partial tuition fee refunds, we would expect a university to consider the circumstances for each student rather than to adopt a blanket policy that refunds are not available.’

At least 200 crammed into a common room at Arundel House, close to Coventry University’s main campus, ignoring social distancing guidelines and the rule of six.

Some revellers could be heard screaming, while a group of male students clambered on top of a ping pong table as they sang along to the thumping music.

The accommodation block is just a two minute walk from campus and is also close to the town centre.

The University of Exeter became the latest to institute a ‘soft lockdown’ on its students yesterday afternoon, asking them not to socialise in other people’s residences and only to mix with people within their household.

It is believed that more than half of the cases confirmed in Exeter over the last week can be traced back to the university.

Elsewhere, 1,700 students are under lockdown at the Manchester Metropolitan University (MMU) campuses of Birley and Cambridge Halls. All lectures, seminars and classes for first-year students at the university will now be online for the next 14 days.

The government has been under-fire for its handling of the pandemic as it spread to college campuses, with freshers across the country locked down inside their halls and told to isolate with just those they are living with.

Photos of students putting up signs on the windows of their accommodation blocks have been shared widely on social media, while others have begged  for help with food and supplies.

The number of students trying to get a shopping delivery means some are starting to run out of food, with parents turning up to halls with bags of shopping.

Furious parents have demanded help, with calls from across the political spectrum for reimbursement of tuition fees.

Despite the ongoing row, students at Tuesday’s nights illegal rave showed no fear of catching the killer virus.

An investigation is underway to find the organisers of the party, with police shutting down communal areas in the accommodation blocks and beefing up security in light of last night’s gathering.

Mr Williamson’s disappearance during the crisis so far is likely to raise further questions over his future, after he faces the wrath of parents, teachers and MPs over the return of pupils to schools and the A-Level and GCSE results fiasco last month.