Stunt woman who lost an arm in horrific accident while standing in for Milla Jovovich for Resident Evil motorbike scene sues for £2.2million after her career was destroyed

Stunt woman Olivia Jackson who suffered horrific injuries in a nightmare accident on the set of Resident Evil is suing for over £2.2m after her film career was destroyed.

Super-fit Olivia, 35, pulled off death defying stunts and starred as a body double for Hollywood’s top actresses in films including Star Wars, Guardians of the Galaxy and Mad Max.

In 2015 while she was performing a motorcycle stunt on the set of Resident Evil: The Final Chapter in Johannesburg, South Africa, she nearly lost her life in a horror accident.

Unexpected rain caused a fight scene she was due to appear in to be cancelled and she was instead told to stand in for actress Milla Jovovich in a high speed motorcycle stunt. 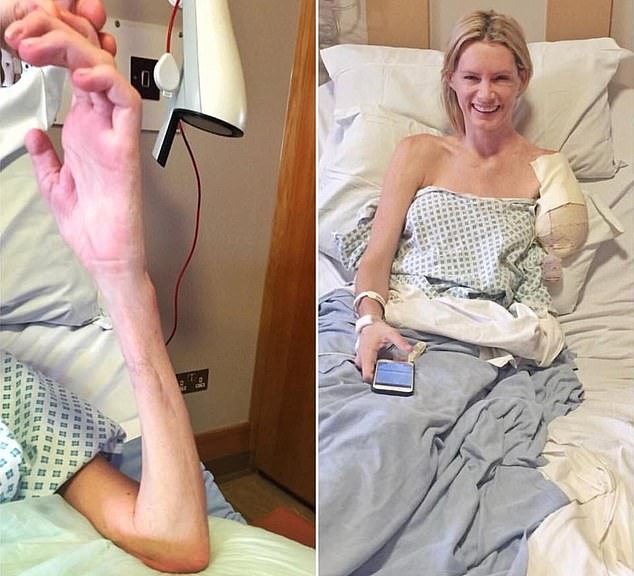 Olivia Jackson, 35, in hospital before her withered left arm was amputated (left) and afterwards (right) 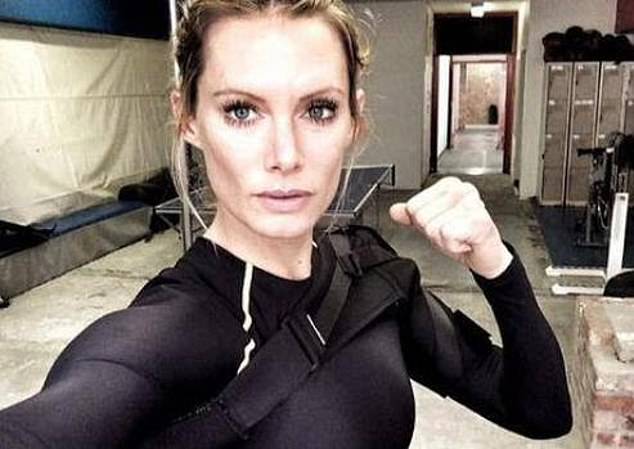 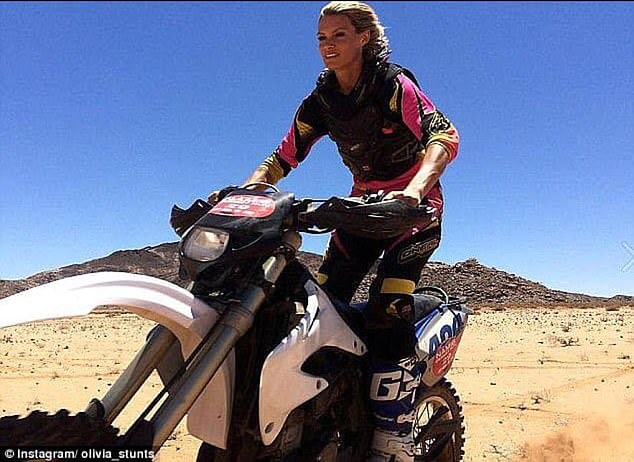 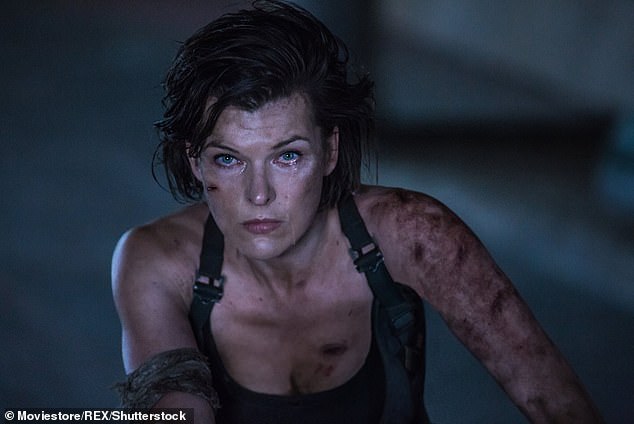 But the action shot went terribly wrong and she was thrown from her bike after a collision with a mechanical mobile film camera.

Her shocking list of injuries included having half her face torn off and having to have her left arm amputated and suffering serious brain swelling and severing a vital neck artery. 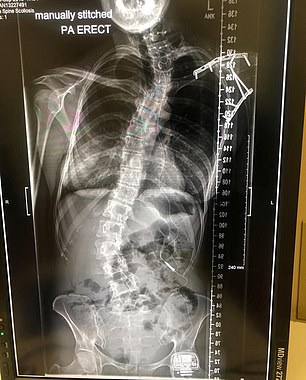 The impact of the crash was so forceful that it broke dozens of her bones and was such that her left forearm was never found.

Three years on from the accident Olivia from Amersham, Buckinghamshire, has launched a legal fight in the Gauteng High Court, Pretoria, South Africa, for compensation for her injuries.

The stuntwoman had been tasked to ride a motorbike at high speed at a camera mounted on a mechanical arm on a Mercedes SUV which would be driving straight towards her.

The camera was to begin filming at ground level and then raise up and over Olivia’s head as she drove the motorbike towards it for an action shot but it didn’t raise up quickly enough.

Olivia, who was wearing a vest top, torn jacket and khaki jeans, was not required to wear a helmet for the stunt and the heavy camera slammed into her upper body and her face. 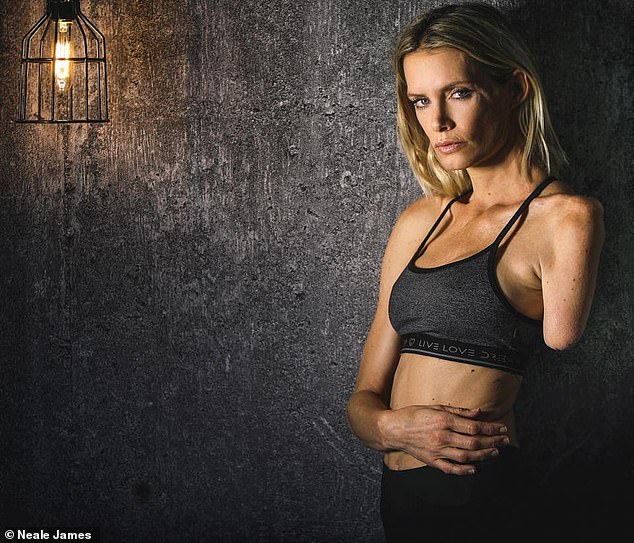 Three years on from the accident Olivia who lives in Amersham, Bucks, has launched a legal fight in the Gauteng High Court in Pretoria, South Africa, for compensation

The terribly injured former professional Thai kick boxer spent 17 days in a coma and doctors feared the worst but said her strength and fitness eventually helped save her life.

When she began to recover she received flowers and support whilst in intensive care from actress Milla Jovovich who she was doubling the stunts for on the Resident Evil film set.

Actresses Charlize Theron, Rosie Huntingdon-Whiteley and Karen Gillan who Olivia has also body doubled for in stunts sent huge bouquets of flowers and personal messages to her. 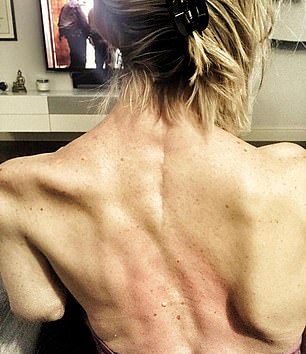 Olivia suffered a painfully twisted spine, a permanently dislocated shoulder, a severed thumb, punctured lungs and broken ribs, and her left arm could not be recovered (pictured after surgery)

Brave Olivia has catalogued her slow road to recovery on her own Instagram page but has had to come to terms with the fact that she will never work in the movie industry again.

Papers lodged at the Gauteng High Court show she is seeking more than R40million (£2.2m) in damages following the accident on a section of road near a dam at Pelindaba, Pretoria.

They show Olivia is suing the Road Accident Fund, the production and stunt company involved as well as the camera crane operator, the driver of the vehicle and the film director.

The paperwork states that when she was previously working in the UK she earned £20,000 a month and whilst working on the set of Resident Evil in South Africa was on £12,500 a month.

Cape Town born UK resident Olivia states that she has been rendered unemployable. The court case was adjourned and will be listed for a full hearing to take place next year.

Brave Olivia has catalogued her recovery from near death in moving Instagram posts on her personal account to fans.

In one caption beside a photograph she posted of her twisted back on her public Instagram account Olivia wrote: ‘This is the twisted upper body I’m left with from my accident. 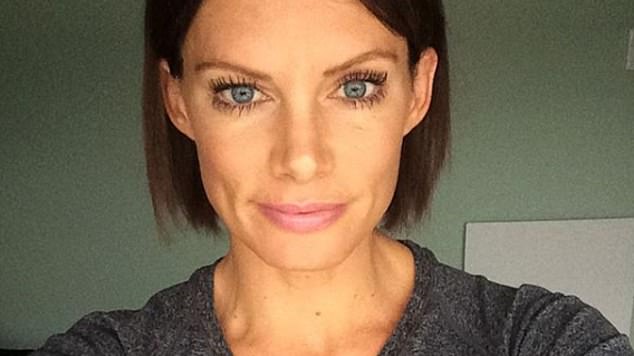 The stunning stunt woman is married to British stunt man David Grant and they live in Amersham, Bucks, together 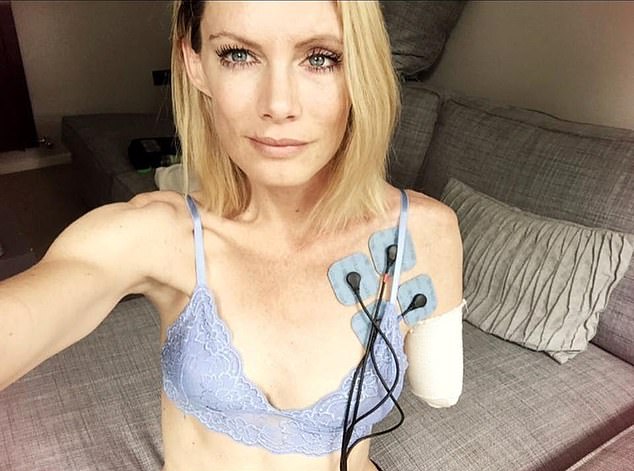 Before her accident she earned £20,000 a month while living in Amersham and whilst working on the set of Resident Evil in South Africa was on £12,500 a month

‘Scew spine, off centred neck (the most painful part), twisted shoulder blade, permanently dislocated shoulder, 1 arm, muscle atrophy on the left hand side of my core and plenty more other treats.

‘I don’t mean to moan but sometimes I must want to crawl out of my own skin & all the pains in it’.

Another emotional photograph Olivia shared is a ‘before’ photo of her left hand appearing enormously swollen with a withered left arm and ‘after’ shot which showed the arm amputation.

She wrote to her Instagram fans: ‘Goodbye to my withered arm, hello my stump. Not how I planned my life to go but just go to embrace what I have & move onwards and upwards.

‘Luckily I have an awesome supportive team behind me’ she said.

Husband David from Kings Lynn, Norfolk, who has done stunts in dozens of Hollywood blockbusters met Olivia on a set and kept a bedside vigil with her while she was in a coma.

In an interview back at their home in Amersham, Bucks, Olivia told the Sunday Mirror: ‘Sometimes when I catch a sight of my stump in the mirror I feel a wave of sadness.

‘There’s no point in feeling down about life – it won’t make my arm grow back. I used to miss my old face but now I style my hair to fall forwards to hide the big scar’.

In a You Tube film interview with Neale James she described what she remembered of the life changing accident.

Olivia said: ‘I was doubling for an actress who was a zombie killer who saves the world. We were shooting motorcycle stuff and I had to ride towards a vehicle coming towards me.

‘There was a Mercedes SUV with a crane on the side of it and a camera at the end of the crane which moves around and I was supposed to drive towards the camera vehicle.

‘It was coming in the opposite direction with the camera starting on the floor and it was supposed to lift up and go over me but they just didn’t lift the camera up in time. 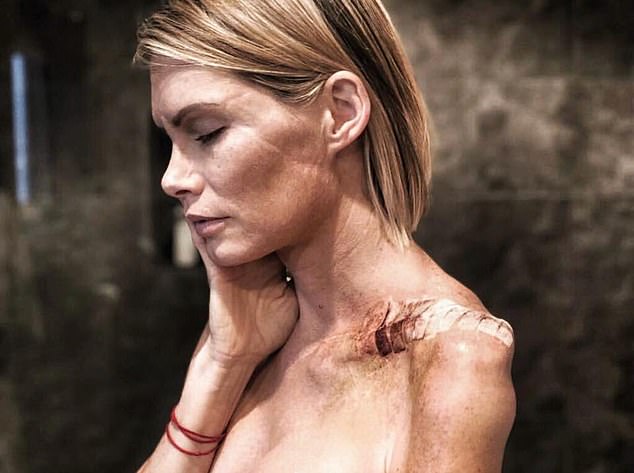 In one of her Instagram posts after the accident, Olivia wrote: ‘I don’t mean to moan but sometimes I must want to crawl out of my own skin & all the pains in it’

‘I went straight into it and it hit me on my face and shoulder. I remember the day up until a few seconds before it happened but luckily your brain switches it off for you’ she said.

In another interview she revealed she is in constant pain three years on from the accident.

Olivia, who was newlywed when injured, said: ‘It is so tempting to hate the people that did this to me but I try to rather use that energy to focus on getting better and staying positive’.

And in an Instagram pic on husband David’s site Olivia wrote: ‘We have built an amazing home together with two fluffy kids and he loves me even though I am a one armed bandit!’

The court case for compensation will be heard in early 2019 and stunt woman Olivia is expected to be present.