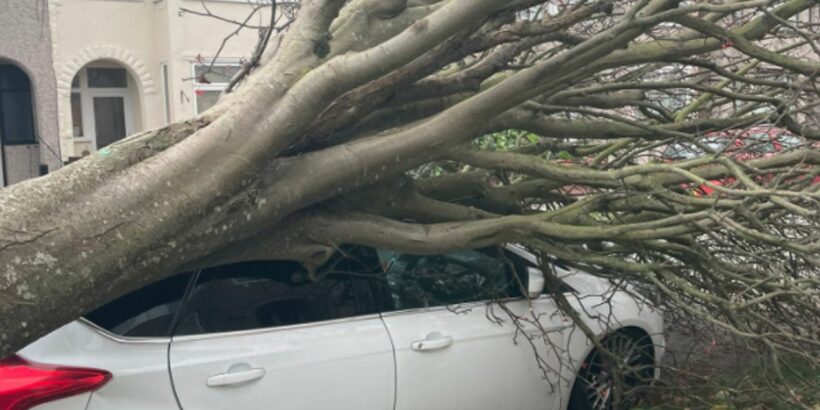 A bitterly cold spell is expected to grip Britain over the next two days in the wake of the killer Storm Arwen.

Three people have died over the weekend as the horror weather pattern wreaked havoc in both rural and urban areas across large swathes of the UK and the Republic of Ireland.

A school head teacher became the first victim of the huge storm after his car was hit by a falling tree in Northern Ireland.

The tragic incident took place on the Dublin Road in Antrim on Friday.

A 35-year-old man was also killed by a falling tree in Aberdeenshire on Friday, which landed on top of his pick-up truck. Police returning from the tragic scene back to their to their van were stunned to find their own vehicle flattened by another tree.

Another tree-fall death was recorded in Cumbria.

Looking ahead, the Met Office has said that Sunday will remain cold, although the more dangerous weather of the weekend is likely to give way to more moderate showers.

The forecast for Sunday 28 November reads: "Rain and snow over northern Scotland sinking slowly southwards and easing. Some light rain for Northern Ireland. Much of England and Wales fine though some showers on exposed coasts. Cold."

A "cold and bright start" is expected for Monday, with rain spreading southeast across all areas.

Meanwhile, a pub manager could have lost her life to Storm Arwen had she finished her cigarette break a second earlier – as seen in terrifying CCTV from this weekend. Cheryl Pound was smoking at 1.32 am on Saturday (November 27) at The Star in Bridgend, a town in between Cardiff and Swansea, during the dangerous weather.

As seen in the clip, she picks up a drink from a table and moves to head indoors, when a huge pine tree crashes down inches from where she is standing.

The 55-year-old told Wales Online: "The pub had shut and I went out for a cigarette before finishing cleaning up. The next thing I get attacked by a tree."