Sunday ROAST! Britain will bake in glorious sun and 78F highs today as summer takes hold… as June is set to be a scorcher with temperatures pushing 90F

Britain’s southern beaches will be packed today as temperatures on Sunday reach a sweltering 78F (26C) as experts say summer has officially arrived.

Bright blue skies are expected to last all day in the south, while the rain will continue to fall in parts of Northern England and southern Scotland.

Rain in the north will give way to scattered showers and localised flooding with thundery weather heading into Monday. Some of those storm clouds could return to the south by Thursday with a cloudy start to the week forecast.

However, temperatures are expected to rise by the second week in June, starting off what is expected to be a scorching summer month. 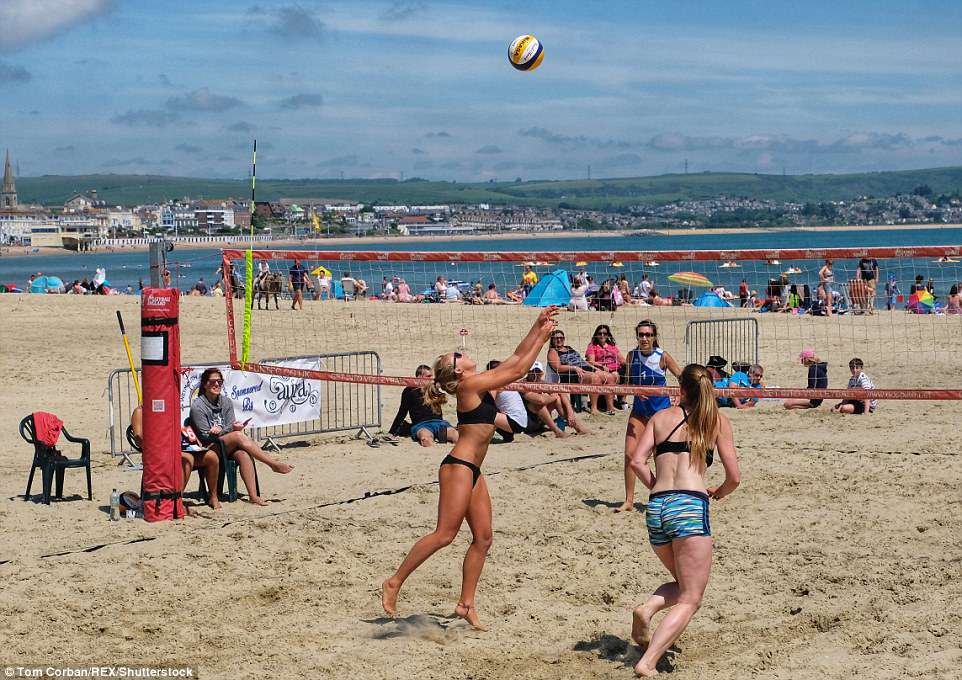 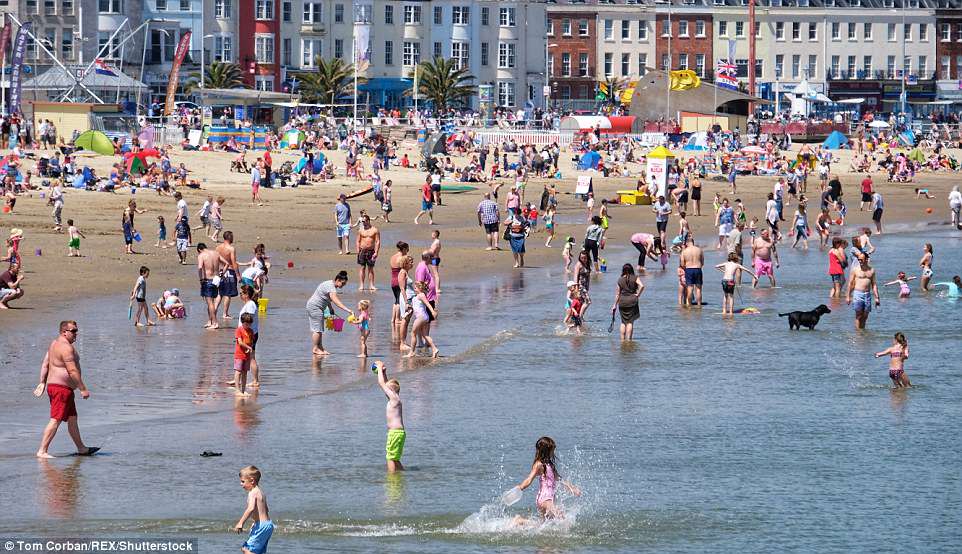 Crowds flocked to Weymouth beach as the coastal fog cleared and the temperature shot up. There are still flood warnings in the north

Bookmaker Coral has slashed the odds again on the hottest June on record, this time to 6-4 from 2-1, as the sun continues to beat down.

He added: ‘The hottest weather is forecast in the first half of summer, with a warmer-than-average June and 32C highs expected.

‘But the pattern of warmth from the continental changes in July, meaning a risk of rain for Wimbledon, with more unsettled Atlantic fronts forecast.

Hotspells in the second week of June will signal the start of summer, according to forecasters, who have also warned it could be slow to begin, this week.

James Madden, forecaster for Exacta Weather, said: We expect it to turn increasingly warmer through the first week of the month with many parts of the country basking in temperatures in the mid 20Cs.

‘It could be rather muggy and humid with some variable cloud cover, but when the sun does come out it will feel extremely hot as summer gets underway.’

The warmer weather follows storms across the country just days ago.

The Met Office revealed this weekend that May was the UK’s hottest ever after it released its provisional data for the month. 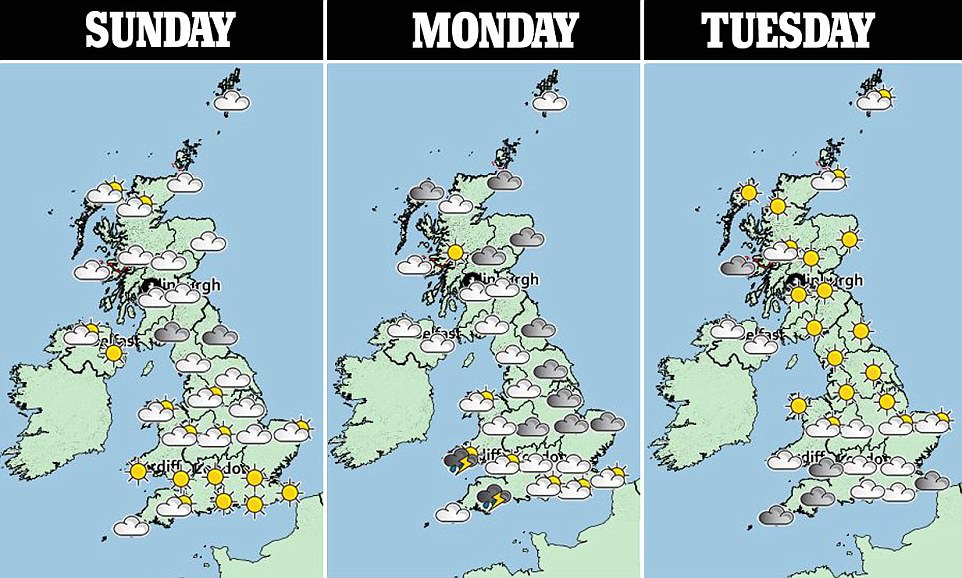 Three day forecast: The week will begin cloudy for much of the country with stormy weather expected but blue skies will return at the end of the week

But now it has issued a number of yellow weather warnings for England and Scotland as gloomy weather approaches.

Forecaster Gregg Dewhurst told MailOnline: ‘Today we have got the risk of thunderstorms developing across northern England, Scotland and eastern England as well.

‘We can expect heavy downpours that could lead to localised flooding.’ 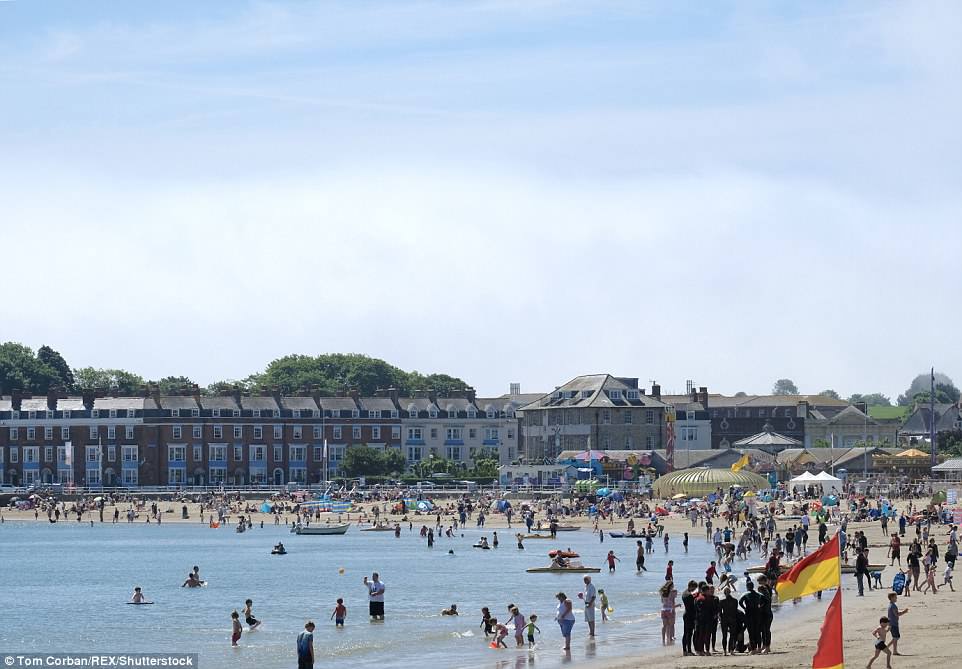 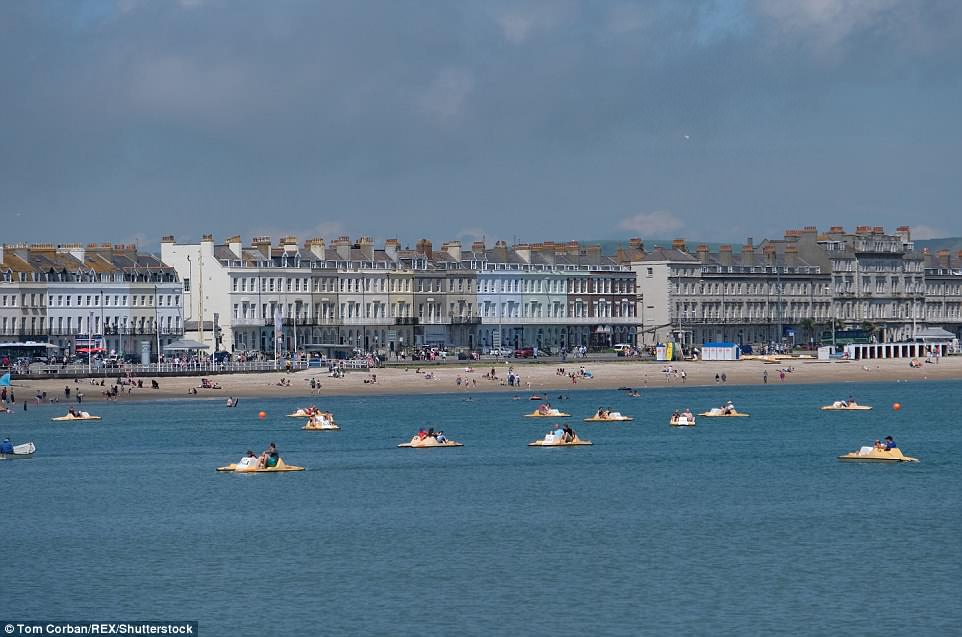 The weather in June could hit record breaking figures as the odds are slashed on the hottest day. Britons took to the beach in Weymouth yesterday

Gregg said showers will be ‘hit and miss and not everyone will see them’ but that the risk of thunder, lightning and rain will continue into tomorrow and on Monday.

The odds on the hottest day in June ever have now plummeted as a heatwave looks likely.

‘We’re expecting a prolonged few days of warm weather now and everything is pointing towards one of, if not the hottest June’s we’ve ever seen,’ said Coral’s Harry Aitkenhead.

The firm have also cut the odds on the hottest June day of all time, which is currently 35.6C recorded back in 1976. It is 5-2 that we see that record tumble this month.

‘It remains a long way away but with the long range forecasts we simply can’t rule out the hottest June day the UK has ever seen,’ added Aitkenhead.