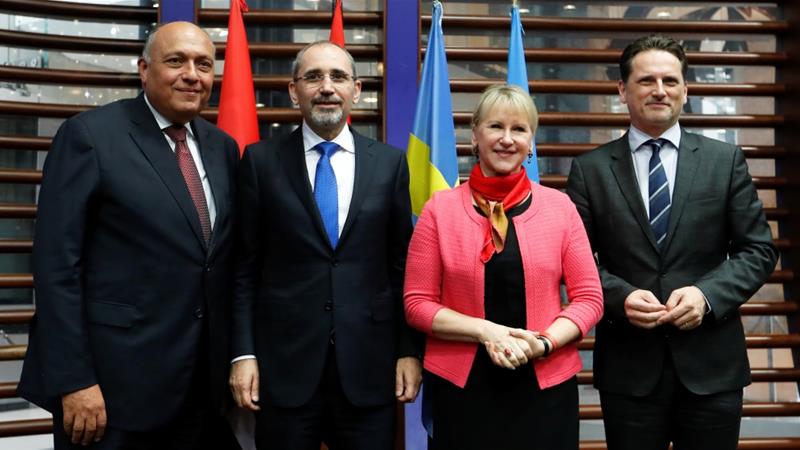 A conference in Rome aimed at funding the UN agency for Palestinian refugees has gathered pledges of $100m in funding, according to UN officials.

The summit, co-organised by Jordan, Sweden, and Egypt in the Italian capital, convened on Thursday at the headquarters of the Food and Agricultural Organization (FAO), where foreign ministers from the three countries discussed the financial crisis confronting the United Nations Relief and Works Agency for Palestinian Refugees (UNRWA).

More than 90 countries were invited to participate in the Rome conference, which was attended by Antonio Guterres, UN secretary-general, and Federica Mogherini, the European Union’s foreign policy chief.

Also in attendance was Rami Hamdallah, the Palestinian prime minister, who called for increasing support and warned of the “multiple risks that this financial crisis will have for Palestinian refugees”, their host countries, and the region’s stability.

UNRWA is one of the region’s oldest relief agencies, but is currently facing an unprecedented financial crisis, according to Guterres, after US Department of State decided to withhold $65m out of a $125m aid package.

The move came after US President Donald Trump threatened on January 3 to cut aid to the agency, which serves more than five million people.

In a series of tweets, Trump had said: “… We pay the Palestinians HUNDRED OF MILLIONS OF DOLLARS a year and get no appreciation or respect.

“… With the Palestinians no longer willing to talk peace, why should we make any of these massive future payments to them?”

Trump’s posts came less than a month after his controversial decision to recognise Jerusalem as Israel’s capital, a move that prompted widespread international condemnation and led Palestinian leaders to say that they would “no longer” accept any peace plan put forward by the US.

The US had been UNWRA’s largest donor, supplying nearly 30 percent of its budget.

Earlier on Thursday, Guterres said in a Twitter post that supporting UNRWA is an “investment in peace”.