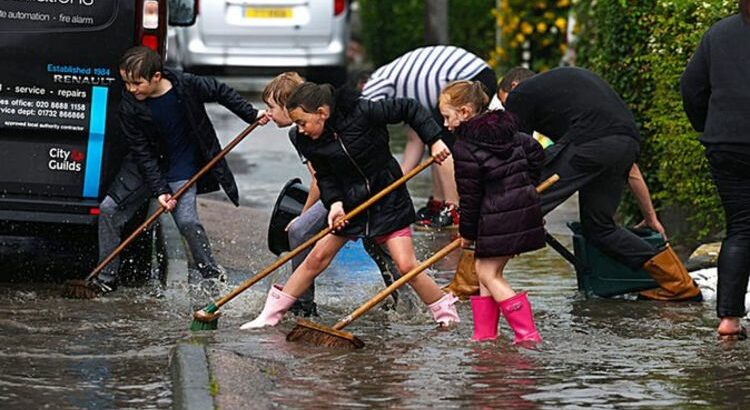 Flash flooding struck London yesterday evening, leaving streets underwater and cars submerged. Hours earlier the South West was hit by torrential downpours. But a mini heatwave is on its way for the rest of the week at least, the Met Office said.

The brighter news will come as a welcome relief for many after a weather pattern drifted in from the English Channel, triggering the huge downpours and sending water gushing into properties.

Police said ceilings collapsed as rain hammered down. London Fire Brigade tweeted it had received over 150 calls about flooding in south-west London alone.

Fire chiefs in Dorset warned that so many people were calling 999 in London, the emergency line was being overwhelmed.

Met Office meteorologist Steven Keates said: “There was some particularly heavy rain around Bournemouth and Poole and we saw 50 to 75mm of rain in one or two spots.”

But Met Office forecaster Sarah Kent said: “Britons could enjoy dry weather with temperatures of up to 24C in central and southern England, and up to 18C in northern England and Scotland.

“In the north-east of England and east Scotland, as we go through the day we will see things brighten up.”