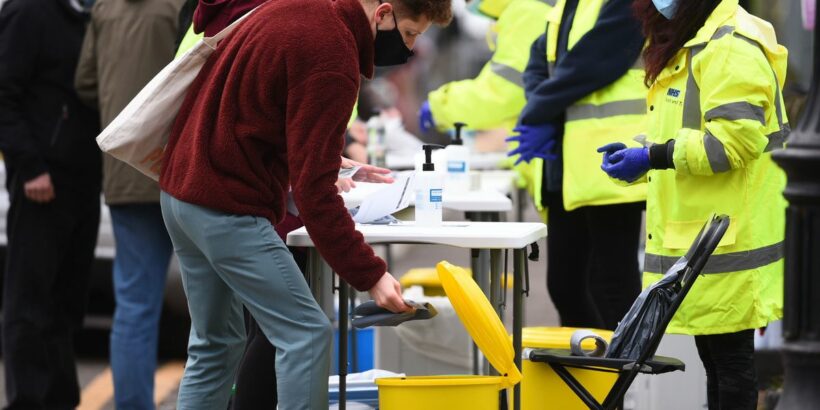 Surge testing has been deployed in four new postcodes after cases of the South African Covid variant were discovered.

It will be carried out in the London borough of Redbridge after two people, who are not believed to be linked, were found to have been infected with the mutant strain.

People in the IG1 and IG6 postcode areas along with small parts of IG5 and IG7 have been urged to get tested regardless of whether they have symptoms or not, the Mirror reports.

Surge testing means increased testing and contact tracing in specific areas in England, including testing people who do not have symptoms.

Both individuals in Redbridge are self-isolating and their contacts have been identified, the Department of Health said.

Similar testing has previously been carried out in South London as health officials battle to keep the mutant Covid-19 strain from spreading.

A statement from the Department of Health said: "The confirmed cases are self-isolating and their contacts have been identified.

"There are no links between these cases and the cluster of cases recently identified in the South London area.

"Everybody aged 11 years and over who resides or works in these postcodes is strongly encouraged to take a COVID-19 PCR test, whether they are showing symptoms or not.

"Enhanced contact tracing will be used for individuals testing positive with a variant of concern.

"In these instances, contact tracers will look back over an extended period in order to determine the route of transmission."

The South African variant, which is more contagious than other mutations, was first detected in the UK in December 2020.

Studies are still investigating how effective vaccines are against the mutation.

It comes amid reports people in their 30s are set to be called up for a coronavirus vaccine as early as next week as the rollout of jabs speeds up.

The Scientific Advisory Group for Emergencies (Sage) cautioned that jabs may fail to prevent hospital admissions amongst a very small number of people, particularly those who are frail and elderly.

The new study, by Liverpool University, also found 3,072 people in hospital with Covid-19 had received a first vaccine dose but less than 21 days previously.

This meant they had likely caught the virus before protective vaccine immunity had time to develop.