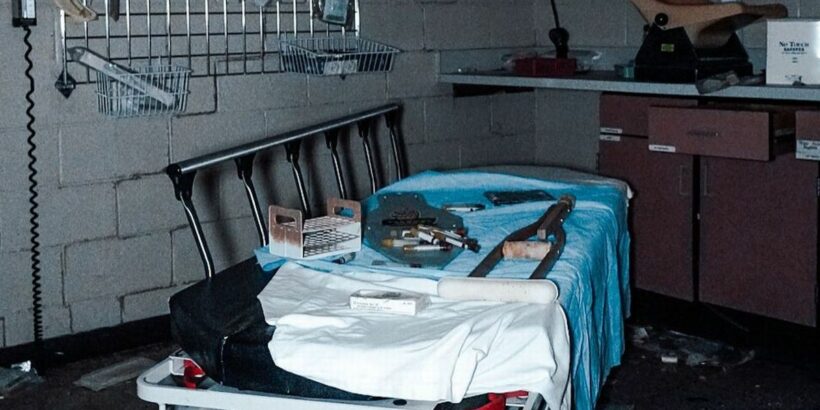 An urban explorer has revealed the chilling moment they stumbled upon the sight of a fully kitted out surgical suite in an abandoned hospital filled with blood bags.

The explorer, Urbex Muse posted the fascinating find on her Instagram with the caption: ""This abandoned hospital is easily one of my tops explores that I’ve had in a while and left both Sonny and me in awe.

"It truly is the epitome of everything left behind, containing everything from fully-stocked surgical suites to patient blood samples and blood bags."

One user joked: "It’s all fun and games until a creepy doctor comes for you."

Another added: "That equipment looks pretty new and clean. Maybe that place is still being used as a black market surgery room. "

The fully kitted surgical suites were laid out to rust as though it is waiting there to be used again.

Bets laid perfectly made in dingy rooms with no patient coming to rest there again.

Each bag is labelled with the blood type and is still clearly readable even after so long.

One user seemed saddened by the sight, writing: "Imagine being the person that gave blood away to help someone and never knowing that it would end up unused and abandoned."

One user even speculated vampires consumed the abandoned blood writing: "Why do I have a feeling that these bags are being sucked empty long ago like juice boxes."

The news comes after Urbex Muse revealed the contents of the suitcase on her Instagram after wandering the eerie former home of a border which she has dubbed 'grandma's house.'

The black and white photos appear to be of weddings and servicemen from around World War 1, going to the early 1920s.

There also appears to be packets of unprocessed camera film left inside the suitcase – it remains a mystery what memories they hold.

For the latest breaking news stories from the Daily Star, sign up for our newsletter by clicking here.