This is the incredible moment two wild badgers take nuts from a woman, right outside her open door.

At one moment the mother and cub even stick their noses into the house in Stockport, Greater Manchester, perhaps sniffing around for more peanuts.

Wildlife campaigner Christine Ian, who filmed the interaction on her phone, has spent years feeding badgers in her garden after finding a den nearby. Her house is built on an old mill, where badgers had their set.

The mother badger, dubbed Humbug, came up to the door alongside her cub Bella. 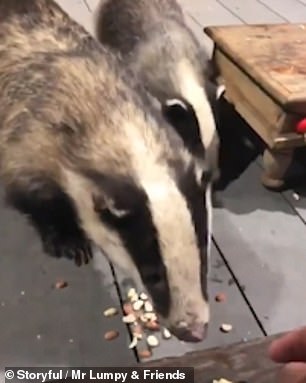 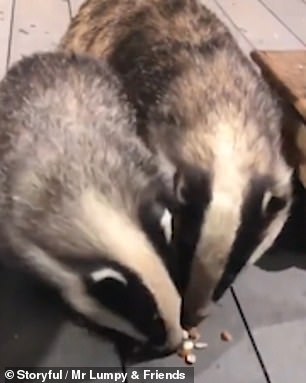 This is the incredible moment two wild badgers take nuts from a woman’s hand, right outside her open door. The amazing interaction was filmed in Stockport, Greater Manchester 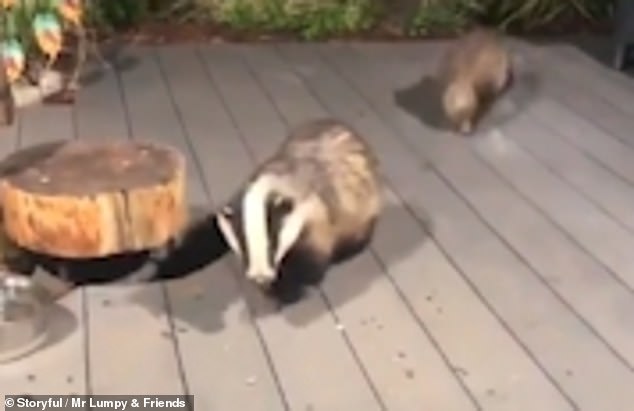 The larger badger (front), dubbed Humbug, and smaller behind which is her cub, named Bella, came to the door to eat peanuts

Amazing footage shows the badgers sniffing around the decking area at the back of the house and looking at Christine before edging forward when she offers food.

First she throws cheese for the badgers before offering them a handful of peanuts right outside her porch door.

And the two scurry up to eat it, almost touching her hand at one point when she offers them more.

‘They are such lovely shy and elusive animals but are comfortable with me and my garden.

‘I sit in the garden with them.’ 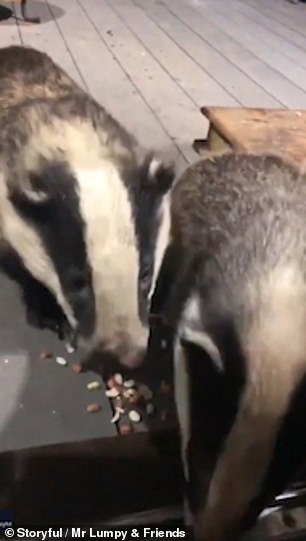 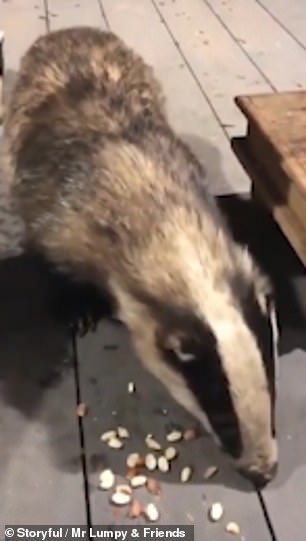 Wildlife campaigner Christine Ian said it was ‘magical’ to have badgers in her garden and said she had been feeding them for the last few years. The group of six come to her door every night

Humbug and Bella are two of the six badgers that live in the sett near their house, which Christine has been watching for more than 10 years.

‘We’ve had different generations visit us,’ she  said.

‘We’ve had Mr and Mrs Lumpy, who are the dominant female and male, their cub Humbug and Humbug has just had her own cub called Bella.

‘Then we’ve got another badger that’s appeared in the last two months and we call her Banana Blossom badger, and it looks like she’s another cub that’s returned.

‘And then we’ve got another badger called Bumpy. He’s not part of the family but he lives in the area and if the two males see each other they fight.’ 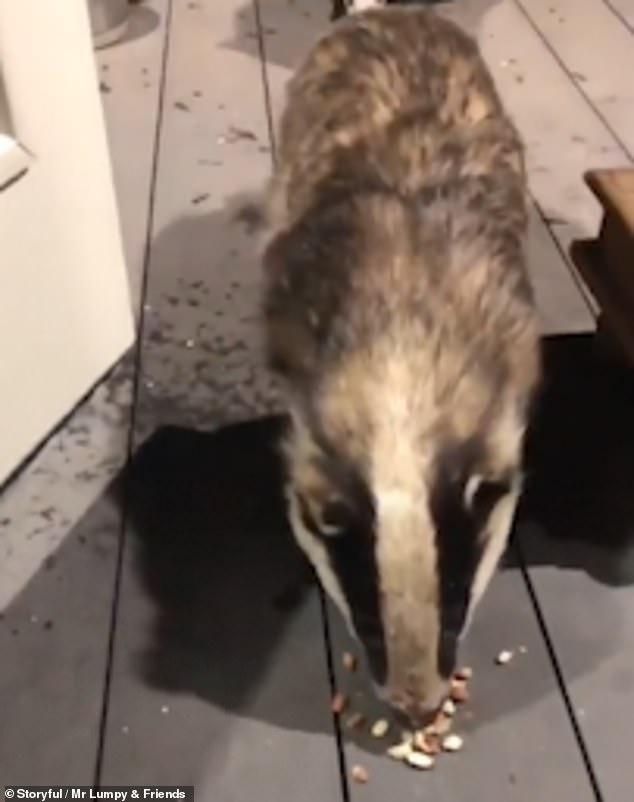 Since launching a social media account for the badger family Christine has gathered more than 34,000 followers for the little family

Christine also has two cats, called Max and Paddy, that she said ‘tolerate’ the black and white striped neighbours.

Since launching a social media account for the mammal family they have gathered more than 34,000 followers.

The badgers come every night without fail and Humbug has come into the house before.

However, Badgers, which are native to the UK, have previously come into conflict with humans.

At the end of last year as many as 32,000 were killed in an attempt to control bovine Tuberculosis, which could threaten cow herds.

That was 10,000 more badgers than were killed the year before, according to government figures.

Published in Nature, the report made the estimation by looking at the genetics in hair samples collected at 120 badger homes across England and Wales.