More than two-thirds of U.S. employers recently surveyed have no plans to make vaccination a condition of work, if courts ultimately strike down the Biden administration’s mandate for large employers.

According to the survey of 1,000 randomly selected members of the Society for Human Resources Management, 75% said they’re not likely to implement either of the mandate’s central directives — full vaccination or weekly testing — should a permanent court ruling make the measure illegal.

“The majority of employers and HR professionals that we chatted with are really in wait-and-see-mode,” Annemarie Schaefer, SHRM’s head of research, told Yahoo Finance. “So they don't even know what to expect."

Fifty-one percent of employers with 100 or more employees who responded to the survey indicated they will hold off on vaccination policy decisions until the legal challenges are settled. (Fifty-three percent of the 1,000 respondents employed more than 100 workers.)

Under an emergency temporary standard, administered by the Labor Department's Occupational Safety and Health Administration (OSHA), the Biden Administration in September directed private sector employers with 100 or more workers to ensure that by Jan. 4 their employees are fully vaccinated for COVID-19. At an employer’s discretion, the rule also allows for unvaccinated employees to continue working after Dec. 5, so long as they wear masks and test negative each week for COVID-19. The rule does not require vaccination for fully remote workers. 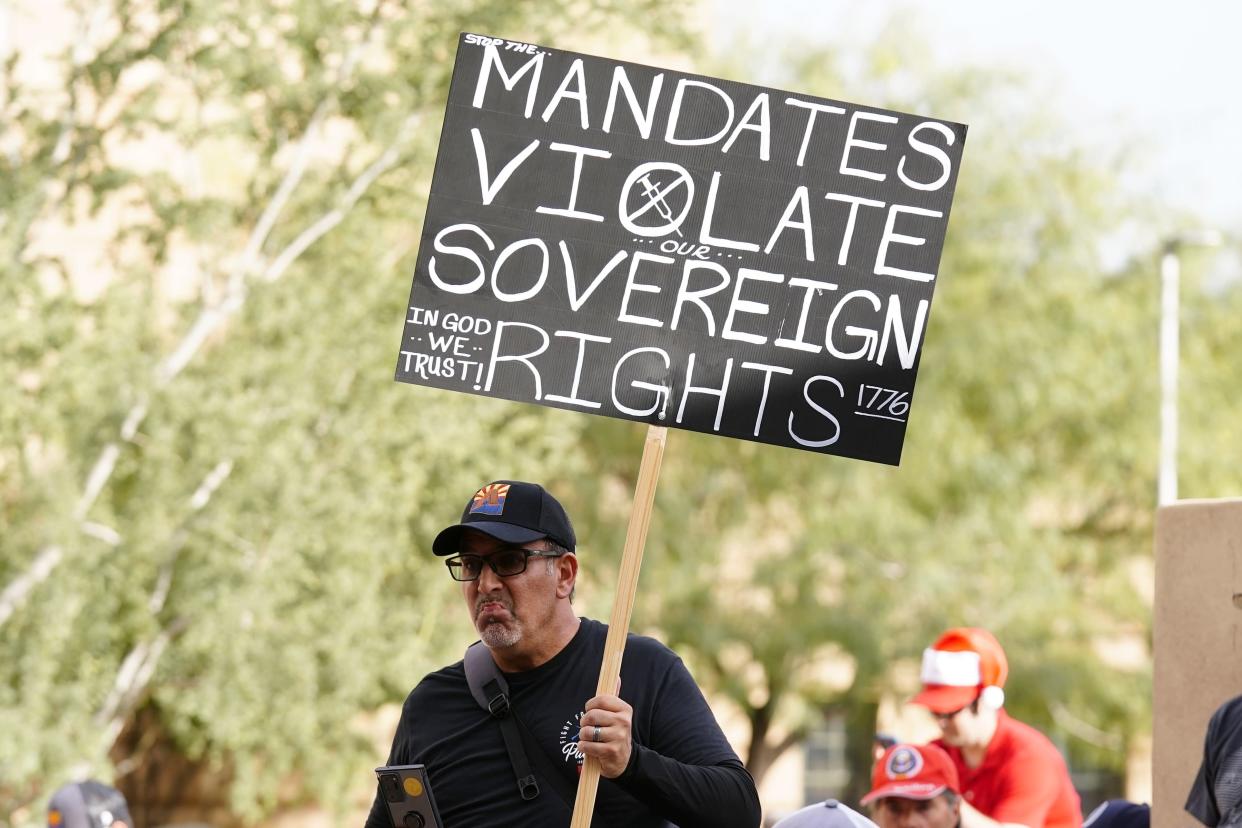 The mandate was quick to draw legal challenges that are now stalling its implementation.

In November, the Fifth Circuit Court of Appeals stopped enforcement of the rule by issuing a nationwide stay of the emergency temporary standard. The case was transferred to the Sixth Circuit Court of Appeals, which kept the stay in effect. The Biden administration has requested that the court dissolve the stay, if not entirely, as least as to its mask-and-test mandate for unvaccinated workers.

For larger employers that anticipated having to comply with the administration’s mandate, the survey found that fewer said they’d scrap vaccination requirements if the Sixth Circuit strikes down the OSHA rule. Private employers are legally entitled to mandate vaccines, so long as they abide by laws prohibiting discrimination against unvaccinated workers based on disability or religious reasons.

Emily M. Dickens, SHRM’s chief of staff, said the administration should have done more to prevent the wait-and-see mode that many of its employers are now facing.

“Unfortunately, the vaccine and testing mandate was rolled out without input from employers, causing the concern and confusion we see in our research,” Dickens said in a statement.

The organization had urged the Biden administration to release a draft and solicit and receive public comment prior to the imposition of any proposed mandate, she added.

The Biden administration’s mandate for large employers isn’t the only one facing legal challenges; its additional vaccine requirements for health care providers and federal contractors are also on hold pending the outcome of court cases.

On Nov. 30, a Louisiana judge issued a nationwide preliminary injunction blocking implementation of a final rule from the Centers for Medicare and Medicaid Services, which requires healthcare workers to get vaccinated. A day earlier on Nov. 29, a Missouri judge issued a preliminary injunction blocking the Final Rule on behalf of 10 states that sued the administration.

Separately, on Nov. 30, a federal judge in Kentucky blocked enforcement of the administration’s vaccination requirements for federal contractors and subcontractors. A preliminary injunction issued by the Kentucky judge applies to three states that sued the administration: Kentucky, Ohio, and Tennessee. On Dec. 9, a federal judge in Georgia issued a similar injunction. The injunction also blocked enforcement of the federal contractor and subcontractor requirements at the request of Alabama, Georgia, Idaho, Kansas, South Carolina, Utah, West Virginia, and Associated Builders and Contractors.

Questions over the legality of the various mandates are ultimately expected to reach the U.S. Supreme Court.

“It seems like there's been a lot of confusion, and [employers] are just waiting to be told what it is that they need to comply with,” Schaefer told Yahoo Finance.