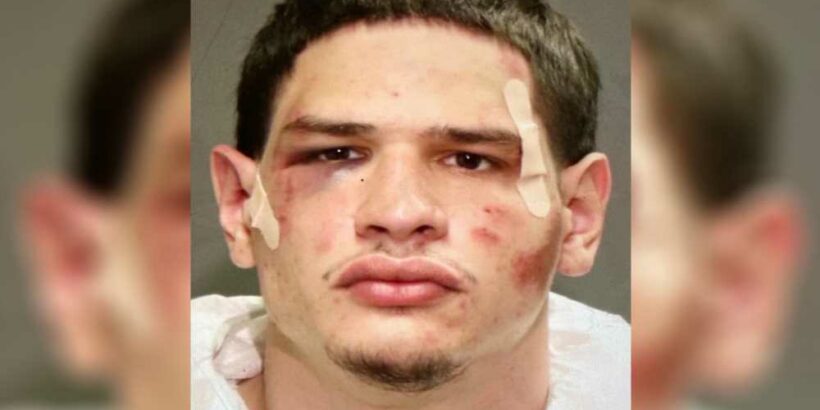 Bloody night in NYC: 18 wounded, including a mass shooting in Queens

The reputed gangbanger charged with shooting a veteran cop in the Bronx was ordered held without bail Sunday — as prosecutors revealed he had been out on bail in an earlier gun-possession case.

Jerome Roman, 26, an alleged member of the Lyman Place Bosses gang in Morrisania, was arrested late Friday after cops said he shot an NYPD lieutenant during a scuffle.

According to court records, Roman already had a pending gun case from Nov. 14 when he got into the fight with cops in the Bronx.

In the earlier case, Roman was charged with possession of a loaded firearm — and sprung on $30,000 bail.

He was nabbed again with a gun shortly before midnight Friday, when cops on patrol spotted him holding the weapon.

“He is now under arrest having been found in possession of another loaded firearm,” prosecutor Cassie Perez said in court Sunday.

“During the struggle of this arrest, the defendant refused to let go of the firearm and actually fired it, striking a uniformed NYPD lieutenant in the right ankle,” Perez said.

Several bystanders were in the area during the shooting, a court affidavit said.

Roman is charged with multiple attempted murder and gun possession charges, as well as reckless endangerment and resisting arrest.

Roman, who still wore the same full-body white jumpsuit he had on after his arrest, asked his family — his brother, sister and sister-in-law — for a change of clothes before he was led out of the courtroom.

“I need some clothes,” he shouted. “And Pumas. Size nine, GV specials.”

Roman has at least 25 prior busts, including the November gun case.

In the latest one, police say he took off after the cops spotted him. They caught up with him and a “fierce struggle” ensued, Police Commissioner Dermot Shea said at a press conference on Saturday.

The lieutenant, who has not been identified, was shot in the ankle during the struggle — with other cops on the scene taking Roman into custody without returning fire.

The wounded cop, a 23-year veteran of New York’s Finest, underwent surgery at Jacobi Hospital Medical Center for the non-life-threatening wound and was released.

Police said Roman had a 9mm Smith & Wesson handgun with 12 live rounds when he was arrested — but the gun jammed during the scuffle, Shea said.

Three other cops were treated for minor bumps and bruises after the arrest, Shea said.

In the new case, Roman is scheduled to testify before a Bronx grand jury on Thursday, Bronx Justice John Clyne said in court.