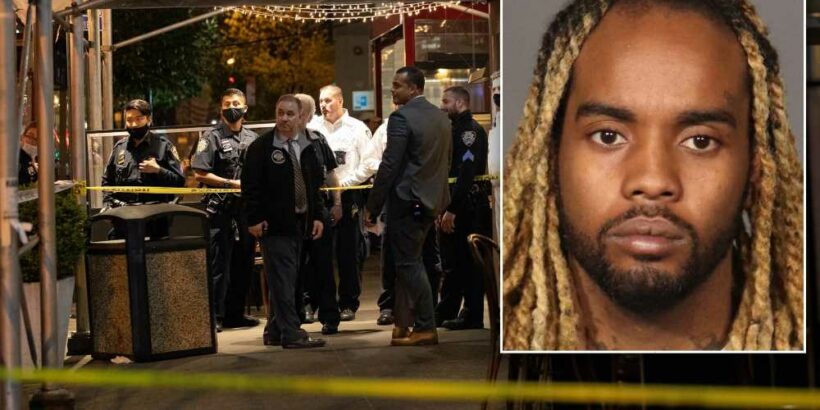 This is NYC: Peter Luger shooting victim says, ‘You go out to dinner and that’s what happens’

The man who cops say wounded two people when he opened fire outside Peter Luger’s Steakhouse was denied bail Saturday at his arraignment in Brooklyn criminal court on charges that include two counts of attempted murder.

Arkies Sommerville, 24, will be dining on jailhouse cuisine after Judge Loren Baily-Schiffman turned down his lawyer’s request that he be granted “reasonable bail” and released provided he’s tracked with an electronic monitoring device.

Sommerville — who appeared remotely via livestream — lives with his girlfriend and stepdaughter in Brooklyn. He allegedly opened fire at a cousin and two other men after they escorted him out of the famous Williamsburg eatery for fighting over women during a birthday celebration there Thursday night.

Assistant District Attorney Samantha Santo alleged that Sommerville fired twice, first hitting a diner in the arm and then a patron waiting to be seated who took a bullet to the abdomen.

The first victim was a tourist from California who is recovering at Bellevue Hospital with a bullet lodged near his spine, police sources said. The other man was treated and released from the hospital.

Santo said there was surveillance video from outside Luger’s as the beef burned. It was not shown during the court proceeding, but it reveals that “multiple individuals were within several feet of (Sommerville) sitting at tables eating their meals and standing in front of the location,” according to a copy of the criminal complaint that also charges Sommerville with assault and weapons possession.

But he was not only was denied bail, he got sentenced to two days in jail for an unrelated 2014 disorderly conduct case in which he had previously pled guilty, but only completed five of his six community service days.

He also has five open warrants in North Carolina, where cops warned on Facebook in February that he should “be considered armed and very dangerous.”

The North Carolina warrants against Sommerville allege crimes that include the armed robbery of a man who was tied up, beaten and had a gun held to his head inside his house in Littleton on Feb. 2, according to a Facebook post by the city police department.

At around the same time as the arraignment in Williamsburg, Peter’s Luger’s was open for business.

“We are all feeling OK. People are still coming in. It’s a regular day. Smooth,” a worker at the restaurant told The Post on Saturday.

Sommerville is due back in Brooklyn Supreme Court on May 5.